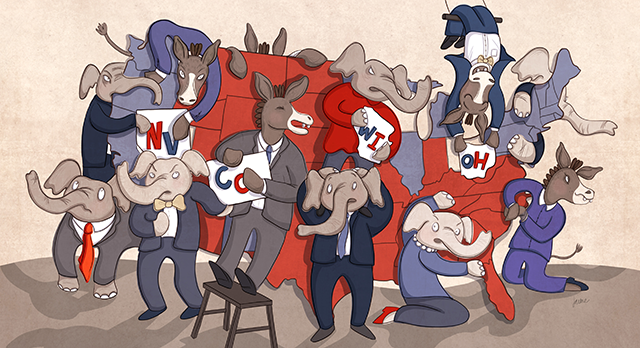 I beg for permission to rant (again) against the Electoral College: to explain at least one of the reasons Republicans love it so much; to cite (again) an elegant solution to its problems that are not making much progress; and to suggest one (anti-democratic) reason why Republicans would oppose it.

Let’s get the partisan punch line out of the way. Five men ‘won’ the presidential election while losing the popular vote. None of them were Democrats. Four of them were Republicans. (The other was a Whig, the defunct party that turned into the Republican Party in the mid-1800s).

Two of the Republican losers-winners were quite recent. One of these was Donald Trump, to whom we shall return shortly.

You can complain about calling this stuff partisan sour grapes if you feel the need to turn it down, but I don’t think it would be fair. You could also argue that the Electoral College, as it is currently composed, is biased in favor of Republicans (I think it’s pretty obvious). What I don’t think you can do is show honestly, rationally or intellectually honestly that it’s a net positive feature of our system that allows the loser of the popular vote to win in the presidential election, which, as I said , has happened five times, twice recently.

Background: The United States, which is often considered a democracy, is not really. It is a republic and could be called a ‘democratic republic’ as it is dependent on elections. It wasn’t so dependent on them in the early days of American “democracy,” when members of the U.S. House were the only federal officials subject to popular vote (and even then, only wealthy white men could vote in most places).

To summarize the greatest undemocratic elements of America’s first century: voting in many states was restricted to property-owned white males; U.S. senators were elected by state legislators, not the voting public; presidents were (and still are) indirectly elected by the Electoral College (although the earliest voters weren’t much of a party animal, they are now); and Supreme Court justices have been (and have always been) appointed to life terms, but nonetheless have the power to overrule elected departments over what legislation is allowed.

Put those together and you’ll understand why I’m saying that the United States hasn’t really been a democracy for much of its history. And unelected officials (starting with Supreme Court justices) still have enormous power. But the power of unelected officials has a deep history in our poor, dear nation, especially in the US Senate.

During the first century and a half of constitutional history (which is most of our history), senators were not “elected” directly by voters, but indirectly by state legislators. That was changed by a constitutional amendment in the early 20th century. Since that change, every feature of the US federal system (except the top judges) has been subject to at least some input from the electorate, but perhaps not as much as you think.

As you know, the presidency, although subject to a choice of “voters” by state, retains the possibility of being “won” by the loser of the national popular vote thanks to the idiosyncrasies of the Electoral College. I’m not going to get into those quirks. You know most of them.

The first loser to win the presidency was John Quincy Adams in 1824, whose party relationship often changed during his career, when the whole party situation was much more fluid. But when JQA “won” the presidency (he finished second, by solid margins in both the popular and electoral vote for Andrew Jackson), Adams identified with a party called the Democratic-Republicans. He later became a Whig.

His opponent, war hero Jackson, also identified as a “Democratic Republican,” though he and his large following morphed into the Democratic Party shortly after as the new two-party system came into being. (The modern Democratic Party once recognized its two founders by calling its annual banquet the Jefferson-Jackson Day Dinner, although many state parties — including Minnesota’s DFL party — have changed names in recent years.)

Regardless, in that 1824 election, Jackson finished a solid first in both popular and electoral votes. But none had an electoral majority, as required by the constitution. That threw the elections in the House of Representatives.

Quincy Adams struck a deal (known in history as the “corrupt bargain”) to gain the backing of third-placed Henry Clay by promising to make Clay Secretary of State, an office that until then the stepping stone to The Presidency. It worked, and while it was legal, it was a scandal even then.

The other four loser-winners cases were simpler. Instead of getting the most votes in the entire country, the Republican candidate “won” by getting the most votes in the Turn right states, especially swing states. The most notable example of this was the 2016 election, when Hillary Clinton won the popular vote with 2.9 million votes. That was by far the largest margin for winning votes for a candidate who lost in the Electoral College.

There may be valid arguments of principle for preserving the electoral college system, although I do not agree with any of them. But when Republicans make such arguments, they are not arguments of principle; they are partisan arguments that go against one of the most fundamental elements of democratic elections: the candidate who gets the most votes is supposed to win.

As you know, the electoral college system is enshrined in the constitution. And each state has electoral votes equal to the US House delegation, plus two more electoral votes representing the two Senate seats. This makes the Electoral College even more undemocratic because it increases the influence of the small states. For example, right now the most populous state, California, has more than 60 times the population of the least populous state, Wyoming. But because of the two bonus votes that don’t match the population, the California Electoral College vote is only 18 times that of Wyoming, giving Cowboy State a disproportionate advantage.

Presumably, the drafters of the Constitution thought this undemocratic overrepresentation of the small states was necessary to get the small states to ratify the new document and allay their fear of being overwhelmed by the big ones. But now, two and a half centuries later, that just means Wyoming has about three times the power over presidential elections it would earn based on population, and that the major population states have less influence than they earn per capita. the population . I can’t think of any real justification for this consistent with the principle of one person, one vote.

Amending the Constitution to address that anti-democratic feature or do (almost) anything else to change the electoral college system would require a massive and lasting consensus involving two-thirds of both houses of Congress and ratification by three quarters of the states. In other words, only thirteen states can block an amendment. Republicans have much more control than that, so solving the electoral college problem through constitutional amendment is not a promising avenue.

So what about that “elegant solution” I mentioned? It’s been around for several years and I’ve written about it before: it’s called the National Popular Vote Interstate Compact. It is actually a temporary fix of the modification process.

By signing this pact into state law, a state pledges to spend its electoral votes on the ticket that wins the most popular votes across the country. But because of the Republican opposition, it has little chance in red states. So far, 15 (all solid Democratic) states plus the (solid Democratic) District of Columbia have signed into law the Interstate Compact. In Minnesota, the proposal has passed in previous sessions of the state house, but not in the state senate. Versions of it were introduced in both chambers of the legislature in 2021, but it does not appear to have progressed. No new states signed up for three years.

It’s a great idea and I hope it eventually works, or, better yet, the whole country gets sick of the many ways the Electoral College system is disrupting the presidential election before the pigs fly. I’m sick and tired of the way swing state logic is dominating the presidential election. With NPV, every vote in the country would count, instead of just swing votes in swing states, and America would be guaranteed to have a president who actually got more votes than his opponent. Picturesque, huh?

MinnPost’s in-depth, independent news is free for everyone to access – no paywall or subscriptions. Will you help us keep it that way by supporting our nonprofit editorial team today with a tax-deductible donation?