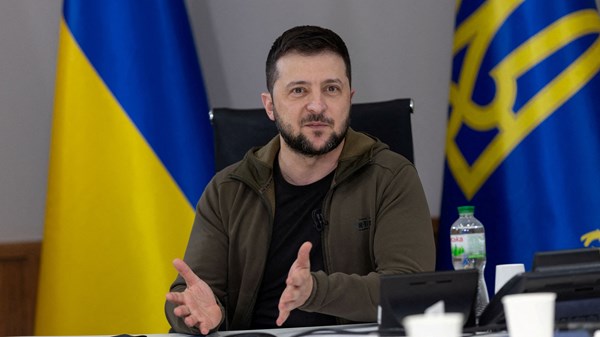 Ukrainian President Volodymyr Zelensky said on Tuesday that Ukraine will fight to reclaim all of its territory from Russian forces, while forces on both sides have engaged in street fighting in Severodonetsk in one of the bloodiest ground battles of the war.

“We’ve already lost so many people, we just can’t give up our country,” Zelensky said via video link at an event hosted by Britain’s Financial Times.

He added that stalemate is “not an option. We must liberate all our countries.”

Zelensky’s comments came in response to suggestions that Ukraine should cede some of its territory to Russia to end the war, now entering its fourth month.

Zelensky added on Tuesday that Ukraine wants to defeat Russia “on the battlefield” before entering into peace negotiations, and reiterated that its country needs an amount of weapons at least equal to that available to the Russians.

“For now, we cannot move forward vigorously” without suffering heavy losses, he added, while calling on Ukraine’s western allies to supply more weapons to his country.

“I am ready for direct talks with (Russian President Vladimir) Putin, whether you like it or not, but if we are going to talk about ending the war and nothing else,” he said. “I’m ready for that. I don’t think there is anyone else to talk to in Russia,” he added.