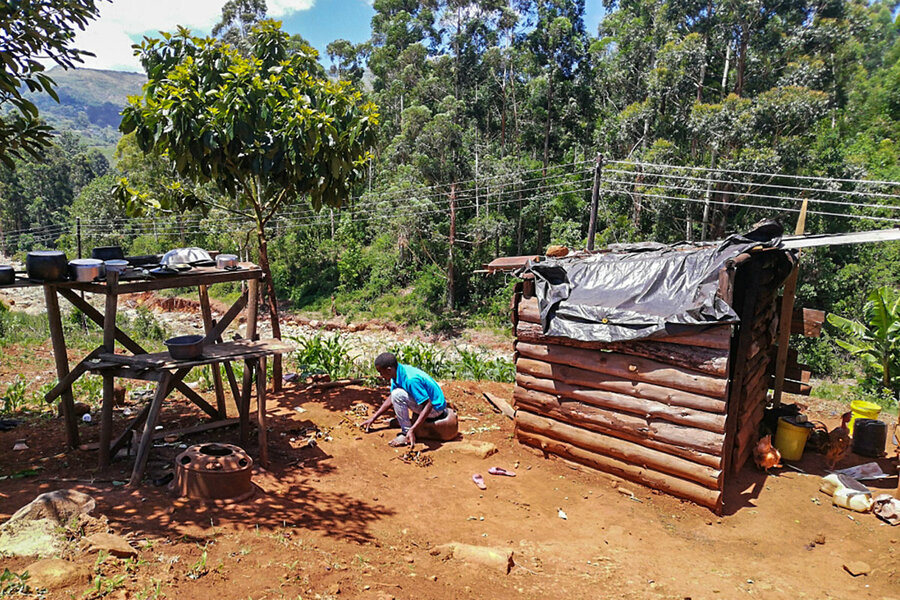 For Florence Panda, the best thing about her new home in eastern Zimbabwe is not its modern design or size, big enough for her family of nine.

It’s the fact that the house was built with cement bricks and mortar, so it should stand during a major storm—unlike her last home.

Ms Panda lost her previous home in the village of Ndiadzo, in Manicaland province, when Cyclone Idai swept through Zimbabwe in 2019, destroying an estimated 50,000 homes.

The house is built of farm stones – locally made from anthill soil – and silage mixed with water. The house was washed away by the heavy rain, leaving Mrs. Panda’s family homeless.

A year later, they moved to a site built by the government to a new set of standards aimed at making rural homes more resistant to extreme weather events and addressing the loss of trees that could be damaged by the effects of climate change, such as flooding worsens.

“It was devastating to lose our homes and everything that belonged to us in just one night,” Ms Panda told the Thomson Reuters Foundation by phone. “We lived in tents for over a year, so we were thrilled to get a new home — it was such a huge relief.”

As rising temperatures cause more and more devastating storms and flooding, Zimbabwe is rewriting the rules on how and where houses should be built to help rural communities weather the worst of the weather.

The new standards and policy recommendations in the National Human Settlements Policy also encourage Zimbabweans to move away from traditional building methods that rely heavily on timber and soil, contributing to widespread deforestation.

Percy Toriro, a town planning expert in Harare, said this is the first time rural house construction in the South African country has been regulated as carefully as urban housing.

“While urban housing has always been fairly safe due to strict planning and construction standards, rural housing has never been subject to standards or inspections,” he said. “Recent cyclones have made everyone realize that poor housing is vulnerable. Sustainability should be the goal in our settlements.”

Government data from 2017 showed that 80% of houses in rural areas were made in whole or in part from traditional materials such as farm stones.

In contrast, 98% of city houses were built with modern materials and techniques.

Since the policy was approved in 2020, Zimbabwe’s government has built 700 permanent homes for people displaced by natural disasters, said Nathan Nkomo, director of the Department of Civil Protection, the state’s disaster management agency that helped shape the new building standards.

With the help of partners including the International Organization for Migration, the World Bank and the African Development Bank, the construction campaign focuses on Manicaland and two western districts, Tsholotsho and Binga, all areas hardest hit by severe weather conditions.

“We need to devise settlements that meet the requirements of habitable architecture,” said Mr. Nkomo.

The Department of Housing and Social Services did not respond to requests for comment.

Most recently, in January this year, Tropical Storm Anna left a trail of destruction in 18 counties, affecting more than 1,300 households, according to Nkomo.

He said most of the houses destroyed by storms were of the type known locally as ‘paal and dagga’ huts, made of wood, anthill soil and reed, but without cement, so they quickly become soaked and weak in the incessant rains and falling apart.

The new settlement policy is not enshrined in legislation, but it creates the legal framework for local authorities to enact ordinances to adapt homes in rural Zimbabwe to national and international standards, said David Mutasa, chairman of the Makoni Rural District Council.

The policy says municipalities must ensure that all new buildings use materials and methods that are “economical, sustainable, [and] resilient” – for example, by insisting that houses be built with cement bricks and that all construction be recorded.

To curb the negative effects of housing on the environment, the policy prohibits the use of temporary wooden huts in mining and agricultural complexes and prohibits building on wetlands, vital ecosystems that provide a natural buffer against flooding.

Mr Mutasa, who also chairs the Association of Rural District Councils of Zimbabwe, said the Makoni council is already making all new houses from cement bricks and fines anyone who cuts down trees for wood to bake farm bricks.

The process of making farm stones is a major contributor to deforestation in Zimbabwe, said Violet Makoto, spokesman for the country’s Forestry Commission.

“It’s a concern — it’s always been a big industry and continues to grow,” she said.

Not everyone is happy with the new housing policy, with some local authorities saying they have faced pushback.

Cost is the biggest issue, especially when people using traditional methods can get most of their materials — such as wood and soil — for free, said Mr Toriro, the planning expert.

After the government built her house in the village of Ndiadzo, Ms. Panda spent $500 to add three more rooms that meet the new guidelines.

“Some people don’t have the money to build modern homes, let alone to the required standards,” she said. “My husband and I survive by doing odd jobs, but we’ve worked hard to raise money to expand our house.”

Mr Mutasa, chairman of the Makoni council, said he had no plans for the government to help people cover the cost of building to the new standards.

Still, he added, local authorities must remain resolute in their efforts to slow deforestation and halt the practice of makeshift construction.

Otherwise, allowing people to continue cutting down trees to build flimsy houses will “keep chasing us,” he said.

This story was reported by the Thomson Reuters Foundation.