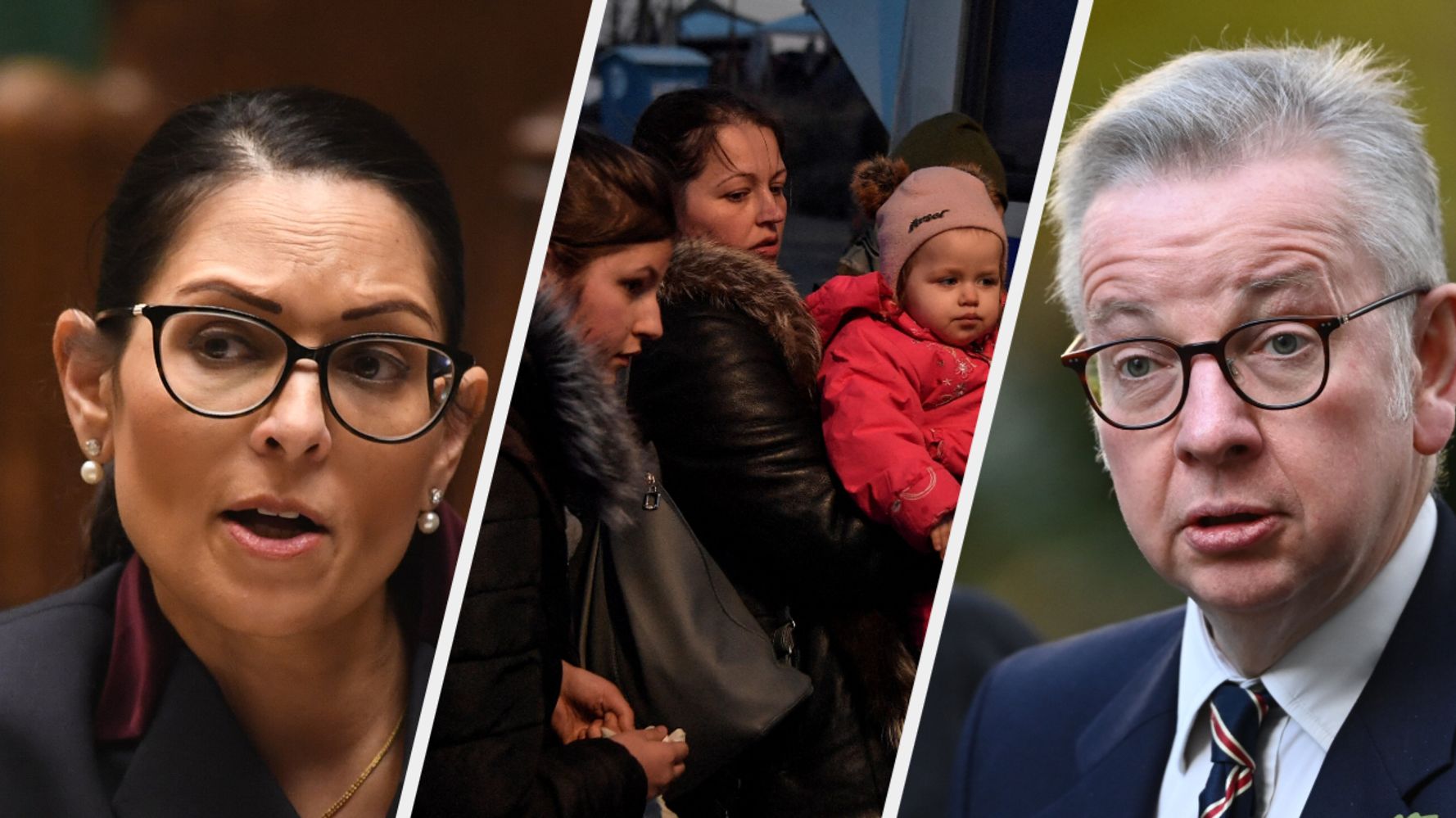 Ukrainians will soon find it slightly easier to come to the UK now that the government has just unveiled a new sponsorship scheme – but, as people have pointed out, there are still significant faults with the programme.

The Homes for Ukraine system enables both individuals and organizations to sponsor refugees so they can live (rent-free) and work in the UK even if they do not have any family settled in Britain.

The sponsors receive £350 tax-free a month in exchange – and Downing Street has confirmed there is “no cap” on the number of Ukrainians who could be welcomed with this system.

The scheme is certainly more welcome than the government’s initial efforts to help with the emerging refugee crisis in Ukraine, but a few people have pointed out that No.10 should still not take too much credit for the new system.

Here’s a breakdown of the top four issues which Downing Street has glossed over now that more than 100,000 people have expressed interest in housing Ukrainian refugees.

As the UK is the only European country asking for visas, it’s still difficult for very Ukrainians to get to Britain.

It is now possible for Ukrainians to apply for visas online but those who have gone through the process have complained about the English-only forms and the absurd questions they have to answer.

Labor dubbed it a “DIY” asylum scheme, and shadow communities secretary Lisa Nandy criticized her government counterpart Michael Gove after he suggested families try to get themselves noticed on social media so they could get a UK-based sponsor.

She said: “He can’t seriously be asking Ukrainian families who are fleeing Vladimir Putin, who have left their homes with nothing, to get on Instagram and advertise themselves in the hope a British family might notice them. Is this really the extent of this scheme?”

Nandy described the system as a “DIY asylum scheme where all he [Gove] does is take the credit”.

The shadow frontbencher also said she believes the “excessive bureaucracy could be cut”, to prevent the “months of delay” while people wait for officials to approve their applications.

It’s heart-warming to see so many British people coming forward with offers of help for Ukrainians.

But all we appear to have is a DIY asylum scheme where sponsors and refugees have to find each other.

The Govt needs to play its part. pic.twitter.com/mz7JyGK71H

2. What about the rest of the world’s refugees?

Downing Street took a long time to come round to the idea of ​​welcoming Ukrainian refugees into the UK.

Initially, the Home Office insisted they would still have to enter the country through the points-based system established for those fleeing Russia’s invasion.

There has since been a large change of heart in the government, after significant public and political pressure, and No.10 rolled out two new systems – the sponsorship program and the family visa scheme.

The speed of this response from the government did not unnoticed by its critics.

Activist Dr Shola Mos-Shogbamimu tweeted: “Why aren’t Black/Brown refugees getting the same instead of dehumanizing hostile environment and deportations?

“Why are Ukrainians treated better than Windrush? They. Are. White.”

Some have pointed to the other, most recent refugee crisis the UK has faced.

A new scheme to welcome Afghans fleeing the Taliban was unveiled in August, but around 12,000 were still waiting to be matched up with a new home by the new year, according to the Guardian.

Why aren’t Black/Brown refugees getting the same instead of dehumanizing Hostile Environment & deportations?

why are #Ukrainians treated better than #Windrush†

Others have referred to the Nationality and Borders Bill (dubbed the Anti-Refugee Bill by campaigners), which seeks to bring widespread reforms to the UK’s immigration and citizenship system.

The government claims turning this bill into law would tackle people-smuggling gangs who encourage refugees to take dangerous routes to the UK.

Asylum seekers arriving by boats could also face up to four years in prison, while almost six million people could have their British citizenship removed without notification by the government and off-shore detention for refugees and asylum-seekers could become a possibility if the bill gets through Parliament.

This alarming bill has prompted fears of Windrush 2.0, and appears to send the opposite message No.10 has prompted when it comes to the Ukrainian refugees.

As the CEO of the Scottish Refuge Council Sabir Zazai tweeted: “We cannot be welcoming on one hand and hostile on another. We need an asylum system that will treat all refugees equally with compassion. Wars don’t discriminate, so shouldn’t we.”

The elephant in the room is the #AntiRefugeeBill, which basically shuts the door on refugees. We cannot be welcoming on one hand and hostile on another. We need an asylum system that will treat all #refugees equally with compassion. Wars don’t discriminate, so shouldn’t we.

3. What does this have to do with the cost of living?

The generosity of the general public who are willing to take on refugees as a cost of living crisis looms has impressed many.

However, the government has also presented the soaring cost of living as a necessary consequence to the war in Ukraine, with prime minister Boris Johnson claiming the public would have to take some of the “pain” of defeating Putin through soaring energy bills.

While it’s true that reducing our dependence on Russian oil and natural gas will increase energy prices, it’s important to remember that there was a cost of living crisis looming even before the Russian invasion.

From April 1, the maximum amount a utility company can charge is set to increase dramatically by an average of £693 per customer due to climbing wholesale gas prices around the world.

Bills would have increased even had the invasion not happened and commentators including financial expert Martin Lewis have said the government should not be conflating the cost of living crisis with the war in Ukraine.

No.10 has promised that sponsors who take in Ukrainian refugees will receive £350 tax-free per month, which could go someway to helping households with the cost of living crisis.

This the conversation PM began last week when I asked him to level with public about what energy sanctions meant. Johnson said it’s going to “bumpy” & said the public would have to take some of the “pain” of defeating Putin (my add: cost of living crisis began before Ukraine) https://t.co/aSN05vRF63

4. The responsibility has shifted to the public

The government has put the burden of responsibility for the refugees mainly on the shoulders of the general public.

While there has been an overwhelmingly positive response and local councils are aimed to assist with the influx of refugees, it means the government is stepping away “from the idea of ​​universal refugee protection”, according to writer Daniel Trilling.

There is “no cap” on the number of refugees that can be accepted, meaning it is simply up to the extent of the public’s generosity.

This echoes the messaging the government has now adopted over Covid, where all legal obligations for the general public to self-isolate when they test positive have been dropped.

The UK’s scheme for hosting Ukrainians relies on the generosity of ordinary people. That generosity is a great thing. But by circumventing the asylum system, the scheme represents a further step away from the idea of ​​universal refugee protection and of a universal welfare state.

5. What about DBS checks?

Critics have raised concerns about safeguarding when it comes to the people who have agreed to take on a Ukrainian refugee.

Anti-trafficking charities have warned that “red flags could be missed” under the new schemes despite the vetting sponsors have to go through.

Lauren Agnew, human trafficking policy expert at Care, said the scheme’s logistics had to be “weighed carefully” even though the system is “well-motivated”.

The vast majority of refugees fleeing the warzone at the moment are women and children – most men have stayed on to fight and defend Ukraine – meaning they could be more vulnerable to trafficking.

Daniel Sohege, director of pro-bono consultancy Stand For All, pointed out the new scheme “sidelines important local authority mechanisms and it puts vulnerable people not just in danger of not having their needs met, but also of being exploited and even trafficked”.

He tweeted that the new scheme is something “which a trafficker could only have previously dreamed of happening”.

Sohege claimed the main way around this is “rapid investment into local authority system”, provision of right to work for all refugees immediately and installing protective measures.

“Organisations that currently ‘match’ refugees to potential homes conduct multiple checks. The speed and scale of this scheme means it is nigh on impossible to properly carry out those checks,” Sohege concluded.

It’s absolutely brilliant that there has been such a huge response from the British public to accommodate refugees, and it is truly disturbing that we are in a place where 44,000 could feasibly to do so without even being DBS checked. #r4today† 1/