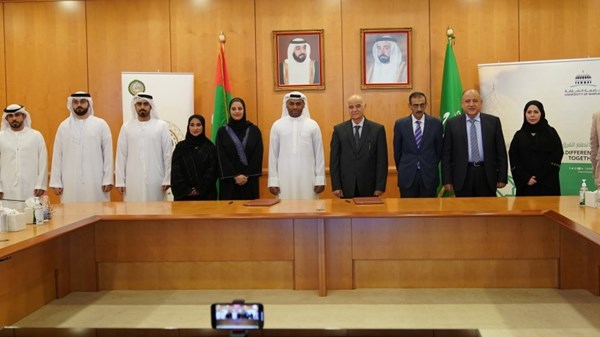 The Arab Parliament for the Child, one of the institutions affiliated with the League of Arab States, has signed a cooperation agreement with the University of Sharjah aimed at strengthening aspects of the Parliament’s joint cooperation to benefit from the training programs which are organized by the university through the Center for Continuing Education and Professional Development, which is reflected in the development of the capacities of children in the Arab world. The agreement, which was concluded at the headquarters of the University of Sharjah, was signed by His Excellency Ayman Othman Al-Barout, Secretary General of the Arab Parliament for the Child, and His Excellency Dr. Hamid Majul Al-Nuaimi, Director of the University Al-Nuaimi welcomed this ongoing and ongoing collaboration between the University of Sharjah and the Arab Parliament for the Child, which resulted in the implementation and preparation of a large number of diplomas and training programs that would contribute to increasing the research and parliamentary capabilities of children and workers in this area. It is provided by the Center for Continuing Education and Professional Development of the University of Sharjah, with its diverse scientific and academic capabilities and expertise in various academic disciplines. The president of the university stressed the need to pay attention to these programs, and to the issue of sustainability and its importance, and to educate young people about them and how it can contribute to the development and development of societies, especially that the University of Sharjah received this year’s gold rating for its sustainability achievements to become the first university in the Arab world to achieve this category.
His Excellency Al-Barout emphasized the importance of concluding this agreement with one of the renowned universities locally and internationally so that joint work takes place in accordance with the signed plans of the Cooperation Agreement for the Service of Arab Youth in the provision of academic programs, courses and training that promote the interests of the child now and in the future. He pointed out that the agreement provides a broad horizon for academic cooperation that Parliament aims to rehabilitate children from the Arab world in general and children of MPs and women MEPs in particular to meet children’s needs for advanced education programs enabling them to fulfill their role and contribute to raising their level and skills and understanding the necessary knowledge and science in relation to their age.
dr. Radi Al-Zubaidi, Director of the Center for Continuing Education and Professional Development at the University of Sharjah, confirmed that the center is constantly working to develop the cognitive and cultural skills of MPs participating in these courses, through modern and cutting-edge subjects that commensurate with the technological developments the world is currently experiencing, in addition to topics such as artificial intelligence, space sciences, astronomy and others.
The agreement comes after the university has over the past two years offered a number of training programs to parliamentarians and counselors of children from Arab countries, among other programs for children in the Arab world in specialized diplomas. from His Highness Sheikh Dr. Sultan bin Muhammad Al Qasimi, Member of the Supreme Council, Ruler of Sharjah, and founder of the University of Sharjah “may God protect him” in caring for children and providing suitable rehabilitation programs by elite faculty members at the University of Sharjah.
The agreement will work to organize bilateral relations between the Arab Parliament for the Child and the University of Sharjah, as it is a pioneering university in its field and is able to serve Parliament in accordance with the latest international standards, its ability to take on challenges and flexibility in dealing. The agreement provided an opportunity to take advantage of the expertise of the university’s lecturers and experts to communicate information to target audiences aged 12-18. The agreement emphasized the launch and management of skills training programs with the aim of providing them to members nominated by parliament, affiliated organizations or the public to serve the objectives of establishing the Arab Parliament for the Child. Under the agreement, it will continue to offer, implement and coordinate training programs that serve the Parliament, in addition to working to develop the capacities of members of the Arab Parliament for the child, while designing and delivering programs to all children of the country, on a way that creates common trends in the extension of parliamentary work to the academic aspect.
The signing ceremony was attended by the university, Dr. Youssef Al-Hayek, Vice President for Academic Affairs, and Dr. Radhi Al-Zubaidi, Director of the Center for Continuing Education and Professional Development.