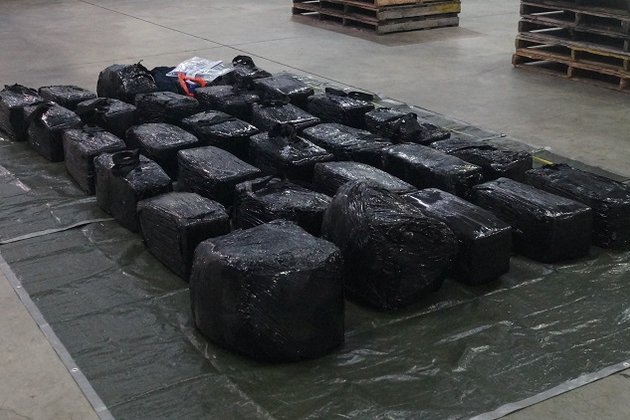 Editor’s Note: Images of the seized drugs are available via hightail.

Police are seeking information on the criminal syndicate responsible for the importation of 700 kilograms of cocaine found hidden on a cargo ship in Sydney Harbor Botany.

Australian Border Force (ABF) agents discovered the drugs on July 22, 2022, during an inspection of sea containers on the container ship Maersk Inverness, which had docked the day before. The loot was found packed in nail bags in a shipping container described as containing wood products.

AFP investigators later seized 28 nail bags, each containing about 25 kg of brick-shaped cocaine. Forensic examination of the drugs identified several decals on the cocaine bricks, including the numbers “5” and “365” and the word “Netflix.”

Anyone with information on this matter is urged to call Crime Stoppers at 1800 333 000.

AFP Detective Inspector Luke Wilson said the container ship had stopped in ports in Central and South America before heading to Australia.

“We are still investigating where the drugs were loaded and who planned to collect them in Australia,” Detective Luke Wilson said.

“Intercepting this amount of drugs would be a major blow to a well-equipped syndicate and prevent millions of dollars in drug profits from flowing back into the syndicate to fund their lavish lifestyle or next criminal venture.

“The AFP estimates that this seizure saved the community more than $451 million in drug-related damage, including associated crime, health care and lost productivity.”

“This seizure demonstrates the technical expertise of our dedicated ABF officers who made the initial detection and prevented this large shipment of cocaine from entering our community,” Chief Inspector Yeats said.

“We continue to work with our law enforcement partners to ensure the Australian community is protected from the importation of dangerous drugs.”

Buyers on the east coast of Australia can pay up to $400,000 for a kilogram of cocaine, depending on availability and purity, with this amount of cocaine representing at least $280 million dollars.

Media are encouraged to include help-seeking information in stories about illegal drugs to minimize any negative impact on people in the community. The following services provide people with access to support and information.

For free and confidential advice on alcohol and other drug treatment services, call the National Alcohol and Other Drug Hotline on 1800 250 015. Access free 24/7 drug and alcohol counseling online at counselingonline.org.au. For information on treating or supporting drug and alcohol addiction, visit turnpoint.org.au. Media questions