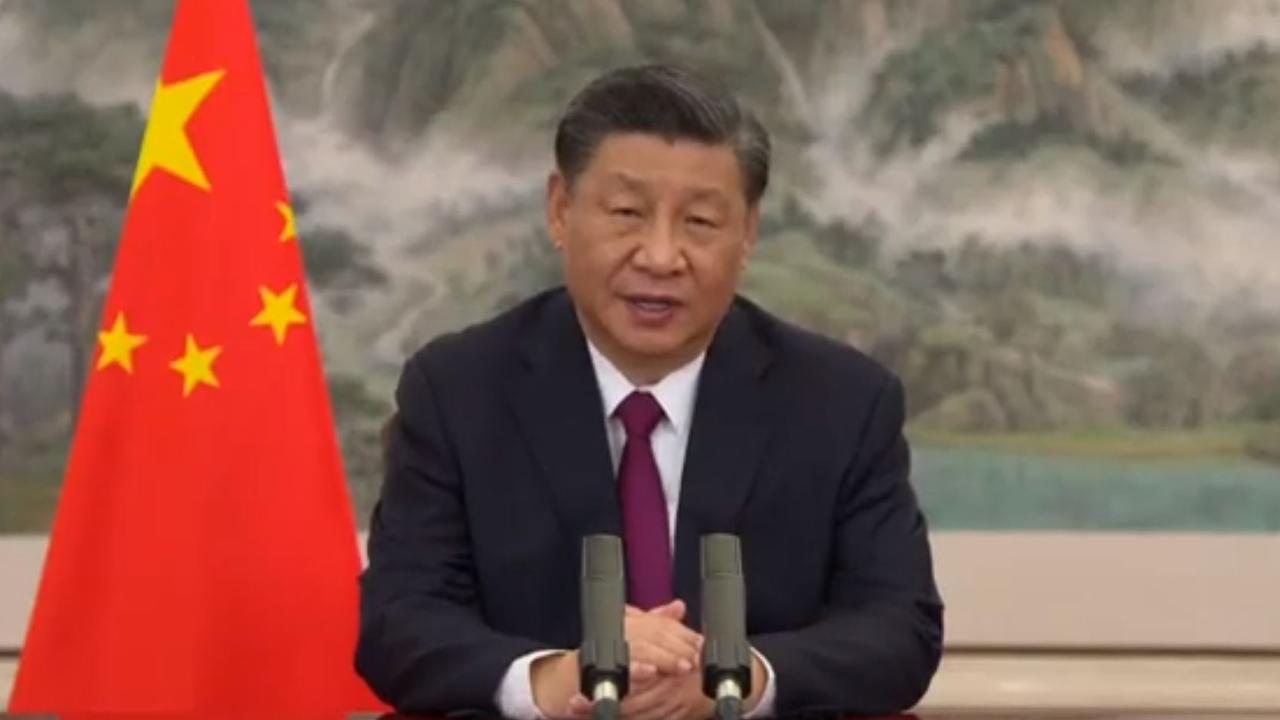 Xi appeared via video link to deliver the keynote speech at the opening ceremony of the Boao Forum for Asia Annual Conference 2022, and began his speech by admitting the theme: The World of Covid-19 and Beyond: Working Together for Global Development and a Shared Future — “couldn’t be more relevant”.

Xi spent much of his speech urging the world to work together against the Covid-19 pandemic, despite Beijing itself being criticized for being notoriously secretive.

Despite the pleas for peace, there were other contradictions. He never mentioned another country by name, but there were clear comparisons to the US, Ukraine and Russia.

“Right now, the changes of the world, of our time, of our history are unfolding in ways like never before,” he said.

“These changes pose challenges that must be taken seriously by humanity.

“We have yet to emerge from the shadows of a once-in-a-century pandemic, but new traditional safety rules are already emerging.

“The weak and faltering global economic recovery is being exacerbated by a widening development gap.

“Countries around the world are like passengers aboard the same ship sharing the same fate. In order for the ship to navigate through the storm and sail into a bright future, all passengers must work together.

“The thought of throwing someone overboard is just not acceptable. Today, the international community has evolved to become a sophisticated and integrated device. Actions to remove a single part will cause serious problems for its operation.”

In what has been called a “thinly veiled rebuke” to the United States, though never specifically mentioning it, he made reference to the “Cold War mentality,” a Communist Party expression used to describe it by the U.S. managed alliance network.

“Safety is the precondition for development. We humans live in an indivisible security community,” he said.

“It has been proven time and again that the Cold War mindset would only destroy the global peace framework, hegemonic and power politics would only endanger world peace, and bloc confrontation would only exacerbate security challenges in the 21st century.”

Details of the Chinese leader’s global security proposal were sketchy, but there were some indications that he blamed the US for the war in Ukraine.

Mentions of “block confrontation” are also used by the Chinese about groups such as AUKUS and NATO and he noted his opposition to what he called “abuse of unilateral sanctions”.

Xi urged the international community to respect “legitimate security concerns of all countries,” a common phrase China has been using to defend Russia since Feb. 25.

“It is important that we remain committed to the vision of common, inclusive, cooperative and sustainable security, and work together to maintain world peace and security; remain committed to respecting the sovereignty and territorial integrity of all countries, maintaining non-interference in internal affairs and respecting the independent choices of development paths and social systems made by people in different countries.

He also spoke of “the principle of indivisible security,” a topic raised by Vladimir Putin in a telephone conversation with Boris Johnson in the same month.

First set out in the Helsinki Act of 1975, but used by Putin in his war with Ukraine, he argues that if the actions of one state threaten the security of another, the principle of indivisible security is violated.

He emphasized his commitment to “resist the pursuit of one’s own safety at the expense of the safety of others; remain committed to the peaceful resolution of differences and disputes between countries through dialogue and consultation, support all efforts conducive to the peaceful settlement of crises, reject double standards and oppose the deliberate use of unilateral sanctions and prolonged jurisdiction.

He also pledged to “work together on regional disputes and global challenges such as terrorism, climate change, cybersecurity and biosecurity.”

Xi quoted “an old Chinese adage” discussing how one should not change one’s devotion or give up one’s pursuit, even in the face of danger and risk.

“A survey of human history teaches us that the more difficult things get, the greater the need to remain confident. Problems are not something to be afraid of, for it is one problem after another that has driven the progress of human society.

“Faced with the many challenges, we must not lose confidence, hesitate or flinch. Instead, we need to build confidence and push through against all odds.

“To break through the fog and embrace a bright future, the biggest threat comes from business and the most effective way is through solidarity.

“Over the past two years and more, the international community has worked extremely hard to respond to the Covid-19 challenge and drive global recovery and development.

“The hardships and challenges are yet another reminder that humanity is a community with a shared future where all people rise and fall together and that all countries must follow the trends of the times regarding peace, development and willing cooperation , moving in a direction of building a community with a shared future for humanity and meeting challenges and building a bright future for collaboration.

“We must work together to protect people’s lives and health. Safety and health are the prerequisites for human development and progress.

“More hard efforts are needed to bring humanity a final victory over the Covid-19 pandemic. It is essential that countries support each other, better coordinate response actions and improve global public health governance to form a strong international synergy against the pandemic.

“We need to ensure that Covid vaccines remain a global public good and ensure they are accessible and affordable in developing countries.”

He urged the need to “work together” to promote economic recovery, blaming the Covid pandemic for “seriously eroding the gains the world has made in manufacturing over the past decade”.

“Even recovery is exacerbating inequalities around the world, widening the gap between the north and south. We must remain committed to building an open global economy.”