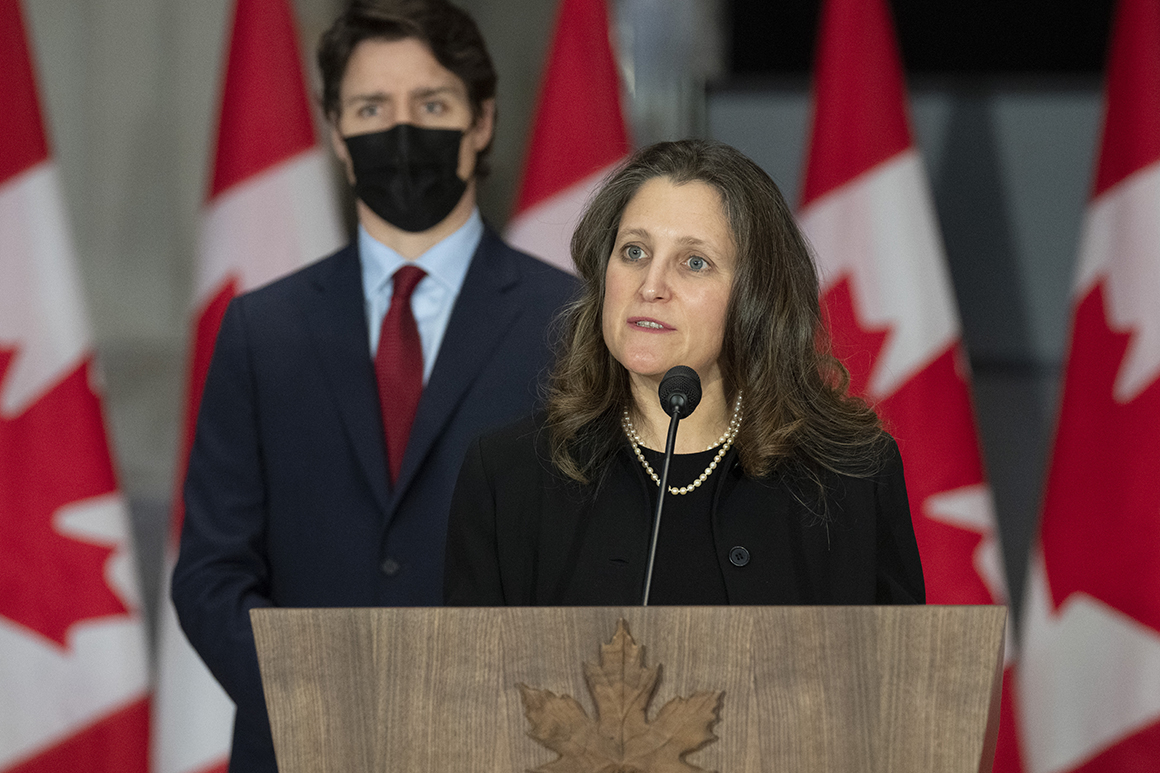 “They don’t understand where money comes from. They don’t know how wealth is created,” former BC premier Christy Clark said this week on the popular Curse of Politics podcast. “All they care about is Justin’s brand, keeping themselves in power, and they’re saying, ‘Après moi, le déluge† †

Not that Trudeau likely winces at being compared to King Louis XV — he’s been called much worse in recent weeks.

But the critics aren’t just his foes in the House of Commons.

C-suites complain that no one in the PMO listens to their pro-growth priorities. Old-school centrists pine for balanced books and fiscal restraint. Nearly seven in 10 voters support another party in a typical opinion poll.

Liberals reinforced the stereotype in the 2021 election with promises of C$78 billion in new spending over five years — a hefty hit to the bottom line for a government that ran consecutive deficits in the hundreds of billions.

They promised to dole out tens of billions in funding for childcare spaces, pledged billions more in post-pandemic stimulus, and promised to subsidize a universal pharmacare program down the road that would pay for prescription drugs.

Then Freeland dropped her 2022 budget on Thursday. To the surprise of many analysts, the word of the day was restraint.

Conservatives still tested it. Pierre Poilievre, a leading contender for the party leadership who is rallying big crowds with a promise of small government, accused the Liberals of having “turbo-charged” inflation by piling on new spending. Jean Charest, a former premier of Quebec who’s also running to be the Conservatives’ chief, complained that there was no path to a balanced budget.

But are they preaching to the wrong choir? An Ipsos Reid poll recently revealed only one in five Canadians listed deficit reduction as one of their top three priorities. Just 21 percent wanted to see a reduction in government spending. More than half wanted help coping with the cost of living.

A resurgent oil patch and a stronger-than-anticipated economic recovery boosted revenue to the tune of C$22 billion in corporate income tax alone this year. Over six years, the feds revised their revenue upward by C$85.5 billion.

So what will the tax-and-spend Liberals do with all the extra cash? Not much.

They promised just $C2.2 billion in new spending this year, and an average of C$5.8 billion every year for the next five.

In her budget speech, Freeland appeared to be speaking directly to anyone who doubted her commitment to responsibly minding the nation’s tiller — outside her party and within.

“Our pandemic deficits are and must continue to be reduced. The extraordinary debts we incurred to keep Canadians safe and solvent must be paid down,” she said. “This is our fiscal anchor — a line we shall not cross, and that will ensure that our finances remain sustainable so long as it remains unbreached.”

Freeland made restraint her personal mission. “Canada has a proud tradition of fiscal responsibility. It is my duty to maintain it — and I will.”

There’s precedent for her penny-pinching. The last time Liberals were in government between 1993 and 2006, they slayed the deficit after punishing cuts and “strategic program reviews.”

Freeland isn’t planning to ax much, but she did promise a strategic policy review that will eventually target federal property, travel, and increased digital service delivery. Treasury Board President Mona Fortier, the Cabinet minister assigned to keep an eye on every cent the government spends, will take on that challenge. The savings target is C$6 billion by 2027.

That was a signal to the centrists that their legacy isn’t toast.

The 2022 budget projects smaller deficits than Freeland promised in December — by 2027, it adds up to a combined C$50.4 billion less red ink. The plan also holds the line on direct program spending, which falls to 6.1 percent of GDP over the same period. That figure was 13.5 percent at the height of the pandemic.

That doesn’t mean the Liberals won’t be spend, however.

Thanks to a deal that secures the support of the left-wing New Democratic Party, the government is wading into a national dental care program to the tune of C$5.3 billion over five years. Another C$10.2 billion over the same period will be shoveled into housing affordability. A long-promised national pharmacare program, which could cost billions more, might be the government’s boldest move of 2023.

POLITICO spoke to Nathaniel Erskine-Smith, a Toronto Liberal MP with an independent streak, before the budget dropped. He’s a three-term Liberal who burst onto the scene when Trudeau swept to power in 2015.

He says the government’s goal should be simple: Do what it was elected to do.

“I don’t want to choose between global vaccine equity, climate action, reconciliation, affordable housing, the opioid crisis,” he said. “I think we can do all of those things in a fiscally sustainable way.”

Erskine-Smith hopes for an “adult conversation” not about cuts, but about “creative revenue tools” that could pay for programs. Taxing the wealthiest Canadians was on his list.

In her budget, Freeland fulfilled an election promise to do exactly that. She targeted banks and insurance companies who made off well in the pandemic with a one-time 15 percent tax on income above C$1 billion.

She also ratcheted up the corporate tax rate for those companies from 15 percent to 16.5 percent on income above C$100 million. Those measures could have netted C$6 billion in five years.

Freeland says a plan to crack down on tax avoidance will scoop up another C$5 billion.

The Liberals will also get cracking on a minimum 15 percent tax rate for wealthy Canadians who “typically find ways to have large amounts of their income taxed at lower rates.” They’ll offer more details in the fall.

The finance minister is walking a fine line that balances ambition and restraint. But as the Conservative Party fights for its soul in a bruising leadership race, Freeland and Trudeau appear to be stitching together a coalition that plays to both the fiscal hawks and doves in their party’s ranks.

Even the big business lobby offered tacit approval. “The direction is positive,” said Goldy Hyder, who heads up the Business Council of Canada. “What’s needed now is a genuine partnership between government and the private sector to ensure these initiatives are successful and sustainable.”

But with Covid creeping back across Ottawa and a land war raging in Europe, the future is hard to predict. A senior government official, speaking on background to reporters, was blunt. “The word ‘uncertainty’ is a big piece of our thinking, the government’s thinking, in the formulation of this budget,” the official said.

“It’s a very big issue — and it has big and complicated roots and no single budget is going to solve it,” the official said.

The official said there are three global factors at play amidst all the other unknowns — China’s ambitions, widening protectionism and the fallout of the war in Ukraine. The speed and “simultaneity” of their emergence is whipping up the most worry, the official said.

Inflation is a persistent concern for Canadians, and the Bank of Canada is poised to raise interest rates next week in an attempt to contain it.

Most economists acknowledge that inflation is a global problem that no Canadian government can control on its own. But macroeconomic theory isn’t much comfort when gas costs upwards of C$2/liter at the pump and the average home price is north of C$800,000.

The next fiscal update could present a bleaker, even more uncertain future that forces the government to make tougher choices about what it can afford and what it can’t. But at least this budget killed a stereotype.

The tax-and-spend label that dogged Trudeau and Freeland is, for now, a thing of the past.