Bobby LeFebre became Colorado’s eighth poet laureate back in 2019, making him the youngest and first person of color to be appointed to the prestigious position in the program’s 100-year history. This honor followed an already impressive career in award-winning slam poetry and theatre, the latter with his play Northsidewhich focused on Denver gentrification.

Much of his current work, according to LeFebre, is done on Instagram, and in the last week he’s posted two pieces of writing — call them micro-essays, narrative poems, whatever you like — that call out what’s going on in the world today . Specifically, the attack on Ukraine and the State of the Union address.

“As someone who has the gift of someone’s ear from time to time,” says LeFebre, “I want to make sure certain things are hyper-present and at the forefront of how we’re considering politics and policy and how the world views war . Everything is connected.” The format of LeFebre’s posts are as stark as their messages, with a square white field written over in black Courier font. “These are things I don’t edit,” LeFebre explains. “These are just things that literally just come out. But I feel like that’s the responsibility of the poet: to respond to the moment in a way that distills and creates conversation and discourse around what we’re living through.”

LeFebre isn’t a suggesting policy; he’s not advocating for a position. “I just want to ask the question,” he says. “I’m asking for people to look at other world conflicts, other places of war and suffering and encroachment, with the same lens through which we’re looking at the current conflict in Ukraine. I think we have selective compassion, collectively. You see it playing out in the news, [with] reporters saying that Ukraine is this seemingly civilized place where things like this shouldn’t be going on, and what they really mean is that these folks are white.” 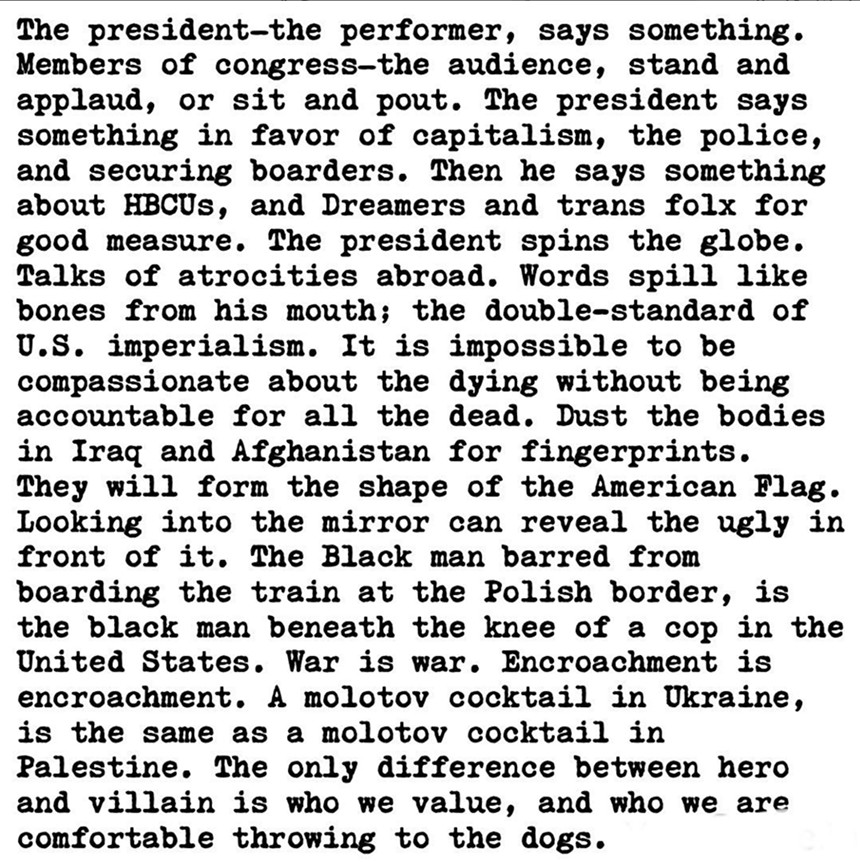 It’s not just white supremacy worldwide that’s driving our myopia regarding Ukraine and other conflicts around the world, says LeFebre. But it’s a reason. “And it’s one we can point to across the world,” he adds. “It begs the question of value: What does the world value? What do we value? why? Where does that come from? How do we undo that? How do we ask people to see everyone in the same way in a time of crisis?”

LeFebre is quick to point out that he’s not trying to minimize the struggle happening currently in the Ukraine, or anywhere in the world. “It’s complex, and you can’t write a dissertation in an Instagram post. But I try to capture the way I feel, and hope people will resonate with it. I think we’re doing our best with what we have. I don’t know what the answer is, but what we can do is question the words that our leaders say, and tie them to historical behavior and see if they’re congruent or not. If they’re not, we have to ask ourselves why, and it’s in that why that we can learn about other important stories.”

Read more of Bobby LeFebre’s writings on his Instagram.