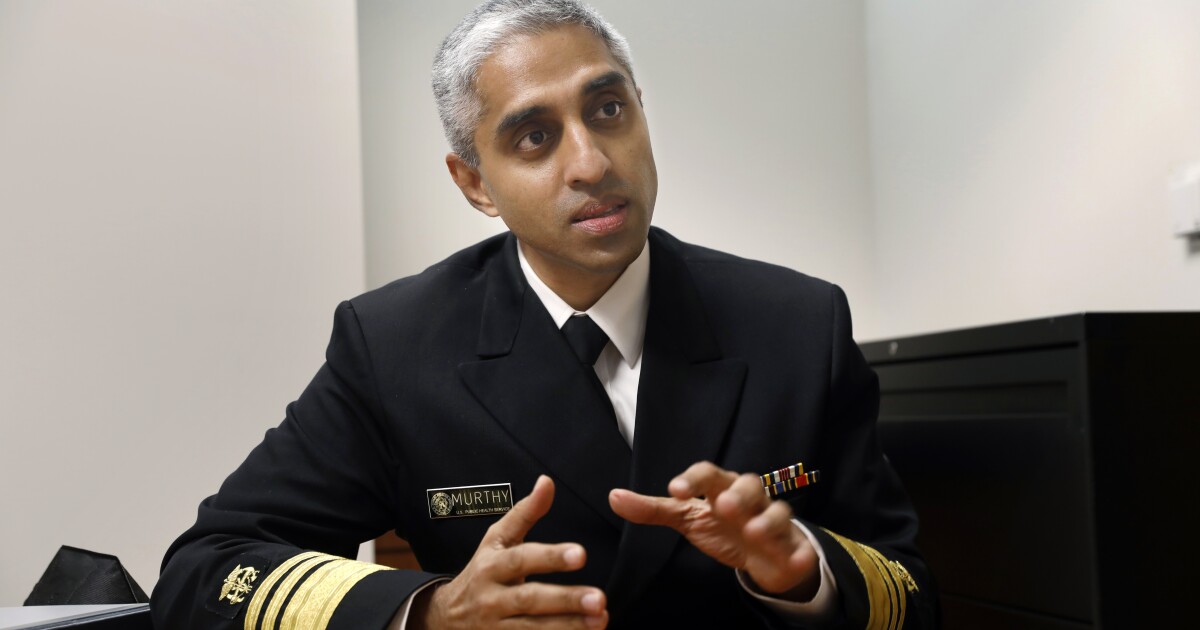 During a visit to Los Angeles on Tuesday, Surgeon General Dr. Vivek Murthy lists at least 30 entities with promising intentions.

“What led to the youth mental health crisis was complex,” Murthy said, “and there should be many different sectors working together — from educational institutions to policymakers to foundations to technology companies and much more.

“However, it is a first step of many that we need to take,” he added, to address the higher suicide rates, untreated mental disorders and anxiety and stress exacerbated by the COVID-19 pandemic.

Pivotal Ventures, an investment and incubation firm founded by Melinda French Gates “to advance social progress,” will work to expand access to mental health services for young people of color, as well as LGTBQ youth and their families.

In addition, the Black Sheep Agency will design a “youth-focused brand campaign” to destigmatize conversations about mental health; the Miami Heat will use basketball players for the same purpose.

“When I talk to young people and ask them, ‘Why don’t you feel comfortable telling someone you’re feeling down?’ they say, ‘Well, you know, I just don’t want people to think I’m broken in some way. I don’t want them to think there’s something wrong with me, that I’m not worth living with anymore,” Murthy said.

That stigma needs to be overcome, he added.

TV network the CW has committed to addressing the issue on its shows, “which will be very powerful in changing the mental health story for young people and demystifying mental health treatment and conversations,” Murthy said.

Locally, the California Endowment is deploying $1 million in new funding for a “youth mental health and coalition building campaign,” and Friends of the Children-Los Angeles is expanding its training and clinical support for professional youth mentors.

Some of these contributions are new or in the making, while some represent the ongoing efforts Murthy wants to encourage to continue and expand.

Funding for the effort can be difficult to quantify. In some cases, the contribution focuses on using existing resources, although the Vistria Group, an investment company, has pledged $250 million to fund youth mental health providers.

In some cases, he noted, solutions have to come from tech companies that are arguably part of the problem.

The Surgeon General praised Meta, the parent company of Facebook and Instagram, for its continued efforts, including rolling out “nudges” that encourage teens to “take a break” from social media or move to other areas of potential interest. These “are based on expert guidance, as well as internal and external research suggesting that nudges can help change behavior online,” according to a statement from the surgeon general.

In one study, 65% of respondents said nudges had a positive effect on the way teens use social media by making them more aware of how they spend their time on the platforms.

Meta has come under fire for allegedly suppressing internal research that Instagram “exacerbated body image problems for one in three teenage girls,” according to an internal presentation reviewed by the Wall Street Journal.

“We just haven’t seen enough transparency there,” Murthy said of Big Tech. Independent researchers “have been looking for years to understand and study the impact of technology and youth mental health. They tell us clearly and consistently that they don’t have access to the data they need from tech companies to assess the impact on the world.” fully understand the mental health of young people. … The longer we wait, the more young people suffer.”

Tech companies are under fire on several fronts, including Congress, where antitrust laws could break them or otherwise change the way they do business.

Google on Tuesday streams the 2022 Youth Mental Wellness Now via YouTube! Summit, which will take place in San Pedro. Google has also pledged to publicize the upcoming 988 hotline, intended as a national emergency hotline for those suffering from a mental health crisis.

A surgeon general’s advice is a public statement intended to draw national attention to an urgent health problem and make recommendations on how to address it. The surgeon general has limited direct power, but traditionally speaks as the executive’s medical voice of expertise.

Murthy is on his second draft after serving as a general surgeon appointed by President Obama from 2014 to 2017.

Under President Biden, his first health advisory signaled the “urgent threat” of medical misinformation and called on technology and social media companies to act more responsibly. Less than a month ago, he released his last advisory, warning about health worker burnout and the dangers it poses.

“All three pieces of advice — health misinformation, youth mental health, and health professionals’ well-being — all focus on issues exacerbated by the pandemic, but they also all predate the pandemic,” Murthy said.