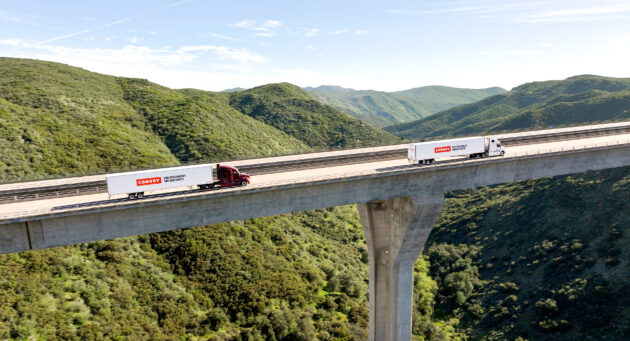 Trucking marketplace Convoy pours a lot more fuel into its tank and raises $260 million as the Seattle company looks to bolster its growing network of truck drivers and shippers.

The new money will help Convoy invest more in its technology that automates transactions between carriers and shippers. It comes at a time when other tech-focused companies, including Uber Freight, are looking to disrupt the trucking industry and invest traditional brokers in their own technology.

Convoy, backed by the likes of Bill Gates and Jeff Bezos, expects to hit more than $1 billion in revenue this year. Sales for the first quarter were up 51% year-over-year.

The volatility caused by the pandemic helped shine a light on Convoy’s value proposition, said Ryan Gavin, the company’s chief growth officer. Several of Convoy’s services, such as the drop-and-hook marketplace Convoy Go, have seen demand surge over the past two years as shippers faced unpredictability in the marketplace.

“Having a technology-focused effort around productivity and efficiency becomes incredibly crucial in times of high volatility,” said Gavin.

This resulted in an increase in the number of smaller transport companies to meet the demand. Independent truck drivers and small businesses make up a majority of U.S. freight carriers and are Convoy’s target market.

The $800 billion US truck industry is huge, but Convoy faces stiff competition. Uber Freight generated $1.08 billion in the fourth quarter, a 245% year-over-year increase, supported by the acquisition of logistics giant Transplace. Uber expects its freight business to generate positive adjusted EBITDA in 2022.

Convoy is “on a clear path to profitability,” a spokesman said.

Traditional middlemen, such as freight brokers who have been catching up for years on newer, technology-driven services, Vise said. “Startups have certainly disrupted the market, but they will have to work hard to maintain their competitive edge,” he said.

The network has more than 400,000 trucks and a large number of shippers, including Home Depot, Procter & Gamble, Unilever and Anheuser-Busch.

Convoy’s key vertical markets are consumer packaged goods; food and drink; manufacturing and industry; and retail/wholesale. The startup makes money by keeping a percentage of every trade made through its marketplace.

Convoy’s core thesis is that it can increase revenues for truck drivers while reducing costs for shippers by eliminating inefficiencies in the existing supply chain and helping to reduce emissions in the process.

“We’re in this place now where we have the automation, we have the technology underpinnings,” Gavin said. “Now we can really start scaling our business.”

The massive funding infusion is also giving Convoy a bigger inventory as some tech startups begin to cut jobs to save money, while venture capitalists slow their dealmaking speed, as reported by The Information this week.

Convoy will use the money to grow its 1,300 workforce and attract more technical talent. Some of the company’s leaders have left in recent years to pursue their own startups, such as Outgo and Common Room.

Gavin, a former general manager at Microsoft and Amazon, said this is a point of pride for the company.

“I think it’s a reflection of the culture we’ve built here,” Gavin said. “We have a lot of people who are excited about using blank whiteboards and turning them into incredible value for customers. You can never really turn off that entrepreneurial spirit.”

Convoy is led by co-founders who previously worked at Amazon: CEO Dan Lewis and Chief Experience Officer Grant Goodale. They started the business by hanging out at truck stops and being thrown out of warehouses while doing market research when Convoy was just a core of an idea.

RELATED: How Global Supply Chain Problems Could Be an Opportunity for Seattle Shipping Technology Companies

Convoy is rumored to be an IPO candidate given its growth and funding to date. It also hired John Murrow as general counsel in October; he previously helped two companies to go public.

Convoy is one of the few startups in Seattle worth more than $1 billion, or “unicorns.”

The latest investment included a $160 million equity round led by Baillie Gifford and accounts advised by T. Rowe Price Associates, Inc., and a $100 million investment in venture capital from Hercules Capital. The line of credit came from JP Morgan.

“The pandemic has highlighted how important trucking is and how volatile and inefficient this industry can be,” Lewis said in a statement. “We know we can do better by using modern technology and algorithms to orchestrate freight logistics, improve service, reduce waste and help drivers. That is Convoy’s mission.”