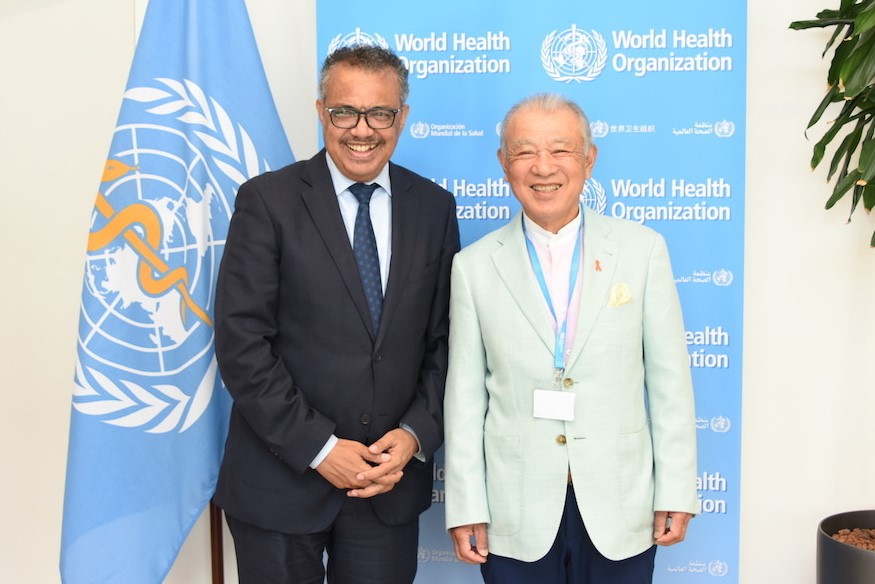 Nairobi, Jun 07 (IPS) – When Yohei Sasakawa visited a remote village in South America, he found 23 people there. It was no ordinary village, as all the inhabitants had been stigmatized and shunned by society for having leprosy.

Yet this is not a unique story, says Sasakawa, the WHO’s goodwill ambassador for leprosy eradication. This is the story of individuals affected by leprosy, where there are over 100 laws worldwide that discriminate based on the disease.

While traveling to at least 122 countries in Africa and South America, he discovered that the story of individuals living with leprosy is marked by stigma, discrimination and exile.

Against this backdrop, Sasakawa delivered a message of hope and encouragement during the sixth “Don’t Forget Leprosy” campaign webinar series entitled Elimination of Leprosy: Initiatives in the Americas and Africa.

He said the elimination of leprosy “was in its final stages. Continued pressure is desperately needed despite and because of the ongoing challenges, including the COVID-19 pandemic and the myths and misconceptions surrounding leprosy.

Keeping in mind the universality of the challenges of leprosy, the WHO Goodwill Ambassador, the Nippon Foundation and Sasakawa Health Foundation are working under the Sasakawa Leprosy Initiative in a coordinated approach to achieve a leprosy-free world.

dr. Carissa Etienne, director of the Pan American Health Organization, WHO’s regional office for the Americas, stressed the need to continue the fight to achieve zero leprosy cases by 2030. She called for a doubling of efforts. The Global Leprosy Strategy 2021-2030 is both a health and economic strategy as it aims to promote Sustainable Development Goals (SDGs).

The webinar provided a platform for health officials, NGOs and representatives of organizations of individuals affected by leprosy. Participants heard how countries in the Americas and Africa are stepping up prevention initiatives in line with WHO guidelines to accelerate the annual decline in new leprosy cases.

Experts stressed that innovative approaches are desperately needed to support leprosy detection, contact tracing and treatment, especially against the backdrop of COVID-19, which continues to shift the focus of the disease.

Speakers emphasized that a WHO-recommended regimen of timely screening and treatment of eligible single-use rifampicin contacts is vital. When the single dose is given as prophylaxis after exposure to contacts of newly diagnosed patients, it results in a 50 to 60% reduction in the chance of developing leprosy over the next two years.

The WHO registered a total of 202,185 new cases of leprosy worldwide in 2019. India, Indonesia and Brazil record the highest number of new leprosy cases – more than 10,000 cases each.

The webinar was held in line with the Global Leprosy Strategy for 2021-2030, on track with the new Roadmap on Neglected Tropical Diseases. To eradicate leprosy, new cases worldwide need to be reduced to about 63,000.

dr. Carmelita Ribeiro Filha Coriolano of the Brazilian Ministry of Health spoke at length about the spread of new cases in America in 2020. Department of Chronic Diseases and Sexually Transmitted Infections Secretariat Health Surveillance

Coriolano provided a detailed sociodemographic profile of new cases of leprosy disease and indicators of physical disabilities picked up by the Secretariat of Health Surveillance of the Department of Chronic Disorders and Sexually Transmitted Infections. She noted that Brazil recorded the highest new cases of leprosy in 2021. Yohei Sasakawa,

In Africa, too, the cases remain a source of concern.

“In 2015, leprosy was eliminated as a public health problem in Angola. But the disease is still a high priority as the latest data shows that 797 new cases have been detected,” said Dr Ernesto Afonso, coordinator of the National Leprosy Program at the Ministry of Health in Angola.

“It is estimated that more than 30,000 people are living with leprosy-related disabilities across Nigeria,” he said.

Lucrecia Vasquez Acevedo, president of the Felehansen National Federation of the Associations of Persons Affected by Leprosy in Colombia, said the stigma persisted.

“We cannot forget about leprosy because of the myths, misconceptions and lies that have been created around leprosy. It is important to teach other people the truth about leprosy. During the pandemic, we learned how to use technology to teach and overcome the challenges of accessing information presented by the pandemic,” Acevedo said, suggesting the same should be true for leprosy.

Professor Takahiro Nanri, Executive Director of Sasakawa Health Foundation, facilitated a question-and-answer session and provided the opportunity to answer questions from the participants. During the session, issues of myths, misconceptions and stigma were raised as they remained an obstacle to eliminating leprosy.

Global community urged not to give in in latest effort to eradicate leprosy, Inter Press ServiceTuesday, June 7, 2022 (posted by Global Issues)