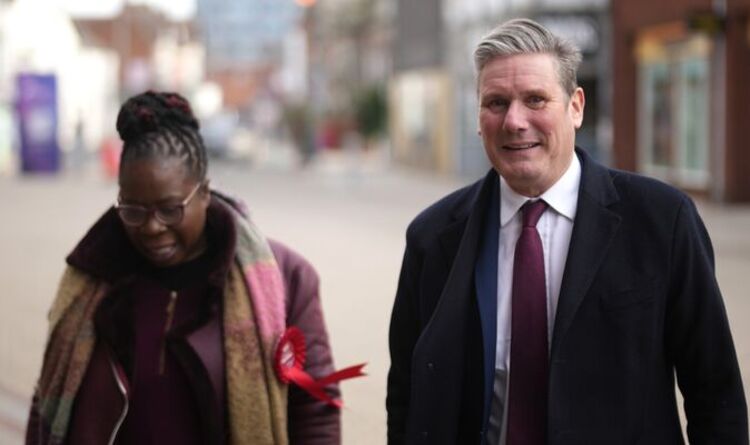 Voters in Birmingham Erdington will today decide who they want to succeed ex-MP Jack Dromey in the House of Commons. The by-election is the first which will be contested by all of Britain’s major parties since the Liberal Democrats romped to victory in North Shropshire last December.

But the Labor candidate, who is the bookies’ favourite, has landed themselves in hot water after it was revealed she made some controversial comments in 2015.

Ms Hamilton said: “Although I believe in the votes, and I believe in our right to use that vote or destroy that vote, I’m not sure that we will get what we really deserve in this country using the votes.

“But I don’t know if we are a strong enough group to get what we want to get if we have an uprising.

“I think we will be quashed in such a way we could lose a generation of our young people.

JUST IN: GB News: Nigel Farage opens up on possibility of nuclear war – ‘Could Putin be stopped?’

Ms Hamilton also suggested Labor’s Muslim MPs in Birmingham were not looking after “the needs of the community”.

The Labor candidate appeared to indicate ethnic minority communities could “lock down” and increase their vote turnout through postal ballots.

She said: “The postal vote is the way some of our ethnic minority communities actually lock it down. Because what they do is whole families just have the postal vote.

“Whoever comes in says hold this one, tick, postal vote goes back, and in one household we can have eight votes and it’s locked down.”

In response to the postal vote claims, Reform UK leader Richard Tice took to Twitter to express his frustrations.

The ex-Brexit Party MEP said: “Truly shocking …. But we saw this Postal Vote behavior by Labor in Peterborough 2019 by-election, we have no doubt fraud took place when we investigated people has been intimidated into silence.”

The Brexit Party, then led by Nigel Farage, lost the 2019 by-election in the leave-voting bellwether seat by just 683 votes.

Conservative candidate Robert Aldern, who has stood in Birmingham Erdington in every election since 2010, responded to the footage of Ms Hamilton by saying: “I’m sure many people will find these comments attributed to the Labor candidate shocking and concerning.”

Tory MP Gary Sambrook has since called on Sir Keir Starmer to suspend Paulette Hamilton if she is elected to the Commons.

The Birmingham Northfield MP, who has a majority of just 1,640 votes, said: “I have written to Keir Starmer this afternoon asking him to suspend Paulette Hamilton due to deeply concerning comments which have this morning come to light.”

However, a Labor source said: “These attacks on a black woman seeking to become the city’s first black MP are deeply disturbing.

“Her comments are being misrepresented and taken out of context as part of a deliberate attempt by the Conservatives and their allies to hijack a democratic election.”

The Birmingham Erdington by-election was triggered following the death of ex-MP Jack Dromey in January.

Mr Dromey, who served as Treasurer of the Labor Party from 2004 until 2010, represented constituents in the Commons for little over a decade.

Birmingham Erdington, which voted to leave the European Union in 2016, has been a Labor seat since 1945.