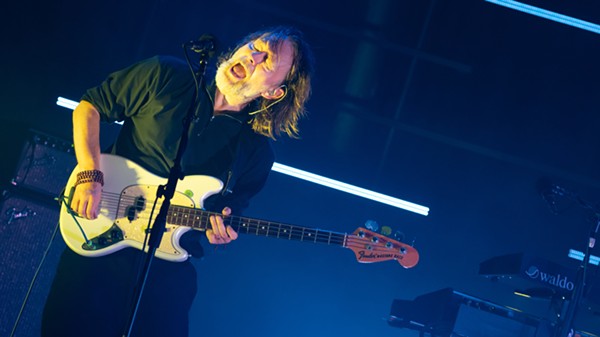 Thom Yorke will perform with his band The Smile in May 2022.

For whatever reason, English rock band Radiohead avoided playing in the Detroit area for years, finally after a 1997 show at what is now the Fillmore with a concert at the former Palace of Auburn Hills in 2012.

If the band ever had a boycott against Detroit, apparently they are officially over it. A new side project called The Smile – featuring Radiohead’s Thom Yorke and Jonny Greenwood, along with jazz drummer Tom Skinner – has now announced a tour with a stop in the Motor City.

The band will perform at the Masonic Temple Theater in Detroit on November 28. Tickets go on sale Friday at 10 a.m. via axs.com.

The Smile has released its debut LP, A light to attract attentionlast month to critical acclaim.

The reason for Radiohead’s years of skipping Detroit was never made clear, leading to fan rumors that the band must have had a bad experience here, such as perhaps breaking into a tour bus. While reports attributed to an anonymous source suggested the reason for the boycott was that the band simply couldn’t find a suitable location in the Detroit area without heavy corporate branding, that doesn’t sound quite right either. Radiohead returned to Detroit again in 2018 for a concert at Little Caesars Arena, which is plastered with logos, including the pizza company’s mascot.

Yorke returned to Detroit again in 2018 as a solo artist at the Masonic Temple Theater. Regardless of the reason for the absence, we’re just happy that Yorke and his company seem to be cool with Detroit now.