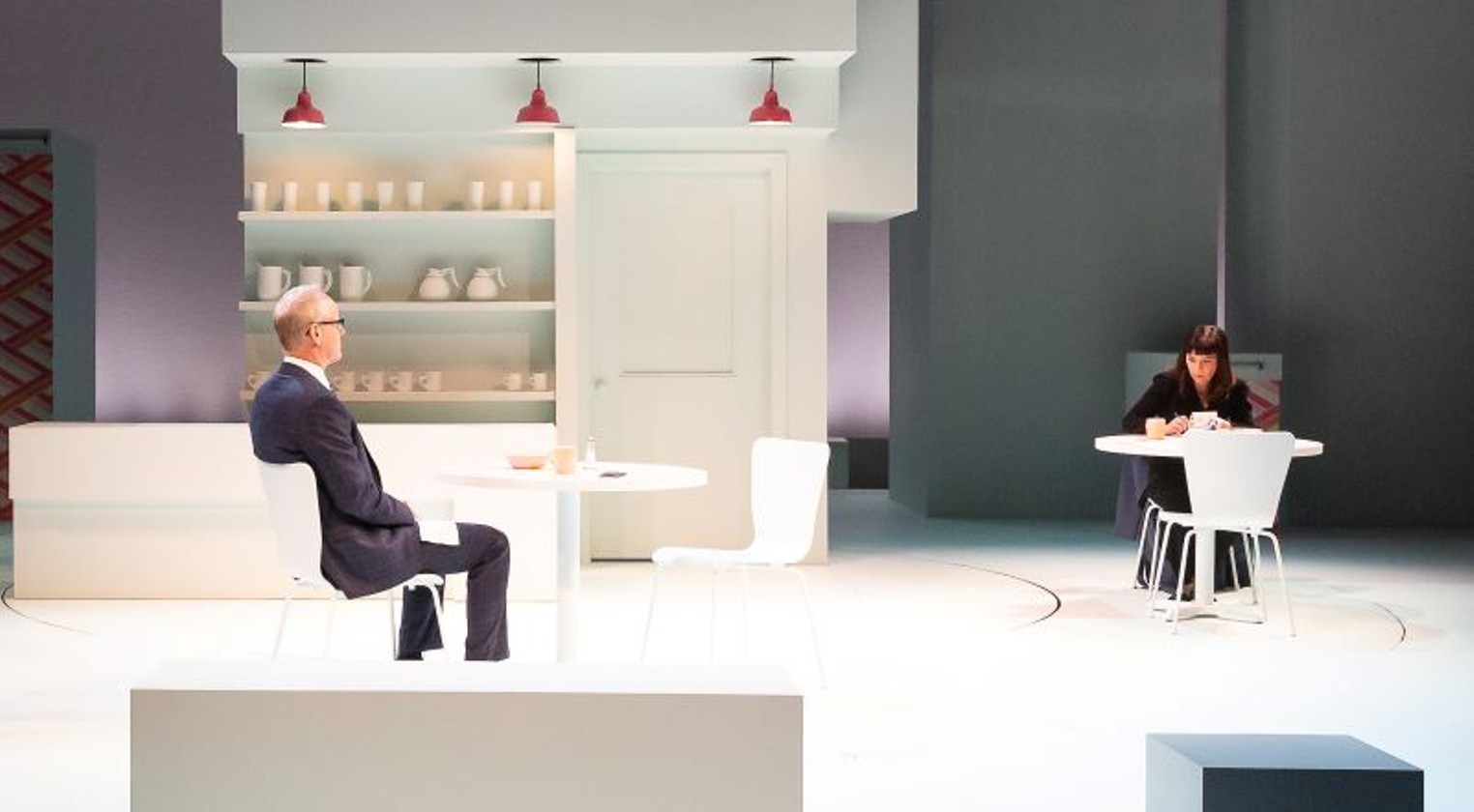 I would just die without my phone. All of us walking around with the world in our pockets, which depends on the information, organization and connection it provides, has once thought this. These machines have become not only the conduit through which we live our lives, but to some extent our very life.

But what happens when you die and your phone lives on?

This question is the top note in Sarah Ruhl’s, Dead man’s cell phone, now on stage in the Alley. It’s a fantastic perfume of a show (directed by Brandon Weinbrenner) whose mid and base notes dry up to something much less tech-obsessed, revealing the distinctly human desires of memory and connection.

Jean (Elizabeth Bunch) is in a cafe minding her own business when she is distracted by the incessant ringing of a cell phone from a nearby table. Upon closer inspection, Jean realizes that the phone belongs to a well-dressed man, who is sitting up and looking straight at her. Yet he does not answer. Closer inspection learns that the man’s name is Gordon (Chris Hutchinson) and is quite dead.

“When the phone rings, we have to answer it,” Jean says several times during the show. Strange for a woman who is against taking a phone herself, who wants to avoid being “there” all the time. Preferring silence over revealing privacy, which results in these often overheard public conversations.

Yet something forces her to answer. Over and over. She vows to keep doing this until the day she dies, pledging love and loyalty to this man she never met.

It is not without reason that Ruhl appoints Jean as an employee of the Holocaust Museum, where he focuses on the tragic memory of that past. Unlike work, here Jean is allowed to bring sad news firsthand and, by bending the truth and clever confabulation, creating meaningful memories for those who mourn.

Or, to put it more bluntly, Jean is lying. Ruhl’s play may be peddling on rambunctious topics, but comedy is the delivery method here. As such, Jean has a plan, whether he receives calls from and/or a later meeting with Gordon’s mistress (Melissa Pritchett), mother (Todd Waite), wife (Michelle Elaine), and brother (Christopher Salazar). To make it seem like Gordon’s last thoughts were loving, kind memories of every person she meets.

Give them what they want to hear and make them feel good. Even if it’s morally questionable. It’s a major ethical dilemma that Ruhl throws back at us once she reveals what Gordon did for a living and how little he thought of anyone but himself.

Does a bad person deserve to be well remembered? Knowing what he was doing, does his family deserve to feel loved by him? Jean becomes so obsessed with taking care of Gordon’s memory, the connection she gains from operating his phone, blurring the lines between what she wants and how she makes it through the nefarious methods Gordon uses in his profession.

The truth is, there isn’t much plot here to work with. Most of what Ruhl gives us is scenario, situation, or dispatch. Which is hard to translate elegantly for the Alley audience, who are more familiar with straightforward storytelling.

It’s wise to have director Winebrenner at the helm, no stranger to making comedy with a dash of the serious business for the company. In his efforts with Stephen Karam’s, The peopleIn the 2019 season, Winebrenner tap-danced fear and disillusionment in the show’s comedic ballroom. Here he sweetly marries old school yuks with Ruhl’s more surreal kind of humor to keep things universally appetizing.

As exhausted as some of us are to see Todd Waite play in drag breed, there’s no doubt that audiences love it. Clad in multiple monochromatic jewel-toned silks and crepe ensembles, Waite romps around with Ruhl’s biting lines and just enough cheekiness to keep people laughing… at least if they’re eager for that kind of humor.

But it’s the rest of the cast that really does the work justice, leaning more deftly into the surreal conditions Ruhl places them in. Two performances in particular span the sweet spot of humor and the spicy honeypot of cleverly tantalizing observations Ruhl gives.

Can we all agree that Chris Hutchinson is most divine when he plays terrible men? It’s no spoiler to say that Gordon, the dead man, is getting his moment to shine on this show. Hutchinson opens the second act in a stand-up comedy fashion, delivering Gordon’s flowing monologue with hilarious bastards.

Unsolicited, he spits on everything from how to eat sushi (no soy sauce you gentiles) to the zombie effect of mass transit (no soul can keep up with that speed) Gordon unleashes a delightfully funny dark diatribe that punctures everything in his path.

Please give this actor a biting one man show to sink his teeth into. 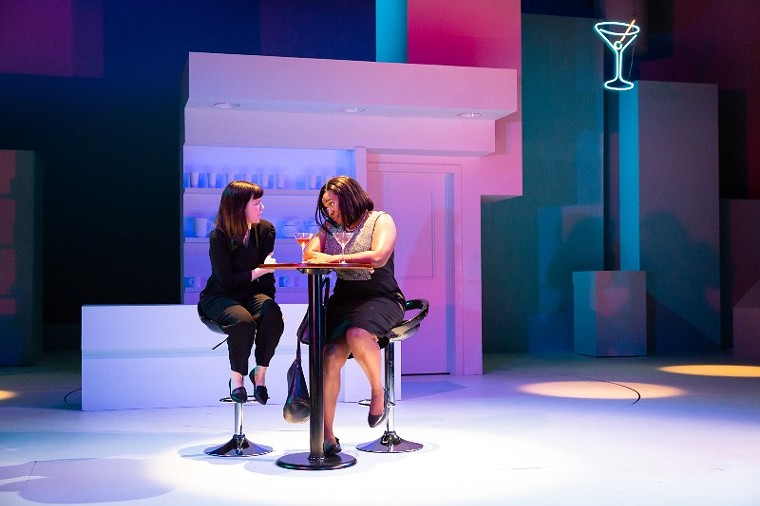 Less abrasive but no less comically unexpected is Michelle Elaine as Gordon’s wife, Hermia. Especially when the booze kicks in and she confesses to keeping it warm in the bedroom with her husband all these years. It’s arguably the most fluidly funny drunken scene we’ve seen in a long time, with Elaine perfectly balancing the physical humor with Ruhl’s devastatingly pointed dialogue.

While Elaine is not a regular actor, she has appeared in Alley productions several times this season, a trend that will hopefully continue.

If there’s one more star on this show, it’s Michael Locher’s set design, as remarkable for what it is as it is for what it isn’t.

We’ve given a pass to the stagnant (and often awkward) industrial-looking two-level set the Alley has been working with all season, a cost-saving measure after being shut down for two years. But hallelujah, that design is gone, and instead we have a new sharp set to consider.

Locher gives us here a predominantly white on white, modern, form-dominated set, meant to evoke everything from the cafe where Gordon dies to his mother’s formal dining room to an otherworldly setting.
Cold as it may seem at first glance, the design grows on us as we realize its function and see it punctuated by a no-nonsense and serene evocation.

On what other set design could Weinbrenner choreograph a confident but too long umbrella dance for a mobile conversation (writing a nod to Ruhl’s essay) and seem like it would fit right in? The blank canvas allows for some of the show’s more thriving attempts to work as well as possible.

When the show closes, we’re not necessarily sure if what we’ve seen is a play or a collection of musings wrapped up in a surreal storyline. Anyone familiar with Ruhl’s writings knows that can often be the case.

But we laughed. Hopefully we have thought. Certainly, we are endowed with some outstanding achievements. And perhaps most interestingly, we’ve seen the Alley achieve something a little out of the norm for their main space stage.

And isn’t that worth showing up and turning off your own cell phone?