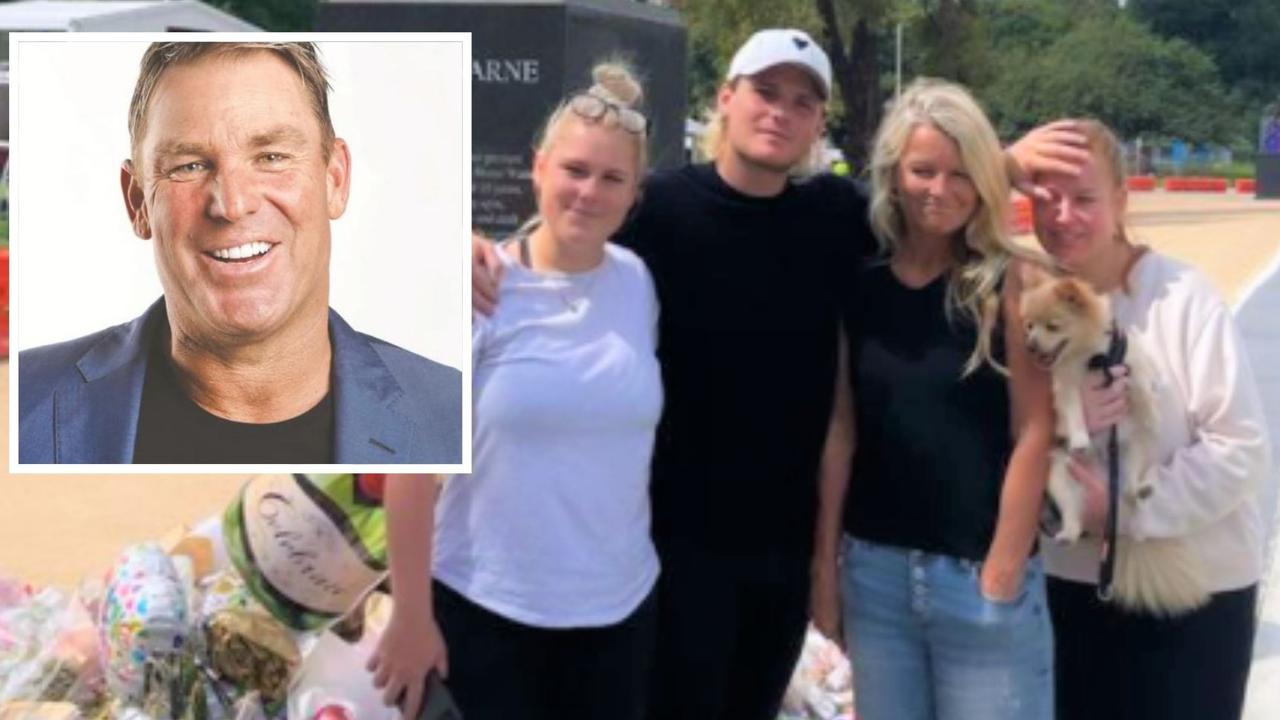 Shane Warne’s three children have visited his statue at the MCG with one posting on social media that their dad was “always here with us”.

The children of the late Shane Warne have made an emotional visit with their mother to a statue of the cricket great outside the Melbourne Cricket Ground.

Warne died on March 4 on the island of Koh Samui in Thailand. He was 52.

Since then his statue in the grounds of the MCG has been adorned with flowers from wellwishers and fans.

On Tuesday, Warne’s children Jackson, Brooke and Summer along with mum Simone Callahan also made the pilgrimage to the statue.

On her Instagram account, Summer Warne, 20, posted an image of the family at the monument with the caption “always here with us dad”.

She followed that up with an image of her father proudly standing beside the statue. That picture was captioned with a love heart emoji.

The statue of Warne, getting ready to bowl, was erected at the MCG in 2011.

“We are so grateful for everyone’s support, the messages and love we have received is so special and touching, everyone support around our Dad’s statue is beyond heartwarming thank you,” she wrote.

“We are so proud of our Dad,” she added.

Last week Brooke also posted another message accompanying a photo of her hugging her dad.

“Dad my heart it broken, This doesn’t feel real and doesn’t make sense that you are not here with us anymore, it doesn’t feel right, you were taken away too soon and life is so cruel, I will forever cherish our final memories together laughing and joking around with each other. We were happy,” Brooke wrote.

“I love you to infinity and back and I will miss you forever.”

Jackson Warne also posted to Instagram but with a simpler, poignant tribute. Next to an image of him beside the MCG statue he simply posted a love heart.

Warne was married to Callahan for a decade between 1995 and 2005. All three kids are from the pair’s relationship. Ms Callahan also put the image of her and the children at the statue on Instagram.

“Thank you for all the beautiful messages of love and support. Vale Shane,” she wrote.

An autopsy at the Surat Thani Hospital in Thailand found that the Australian sporting icon died of natural causes.

“Today investigators received the autopsy result, in which the medical opinion is that the cause of death is natural,” deputy national police spokesman Kissana Phathanacharoen said in a statement earlier this month.

“Investigators will summarise the autopsy result for prosecutors within the time frame of the law.”

Warne will receive as state memorial service on March 30 at the MCG.