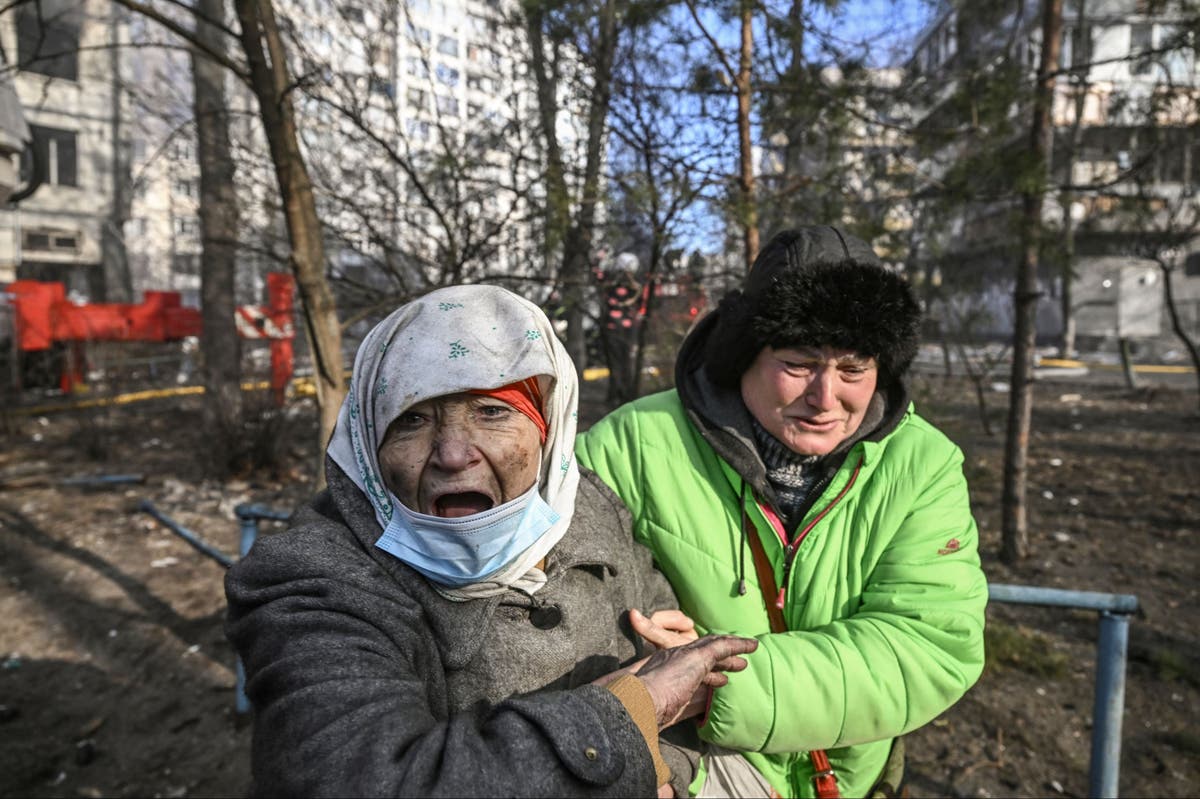 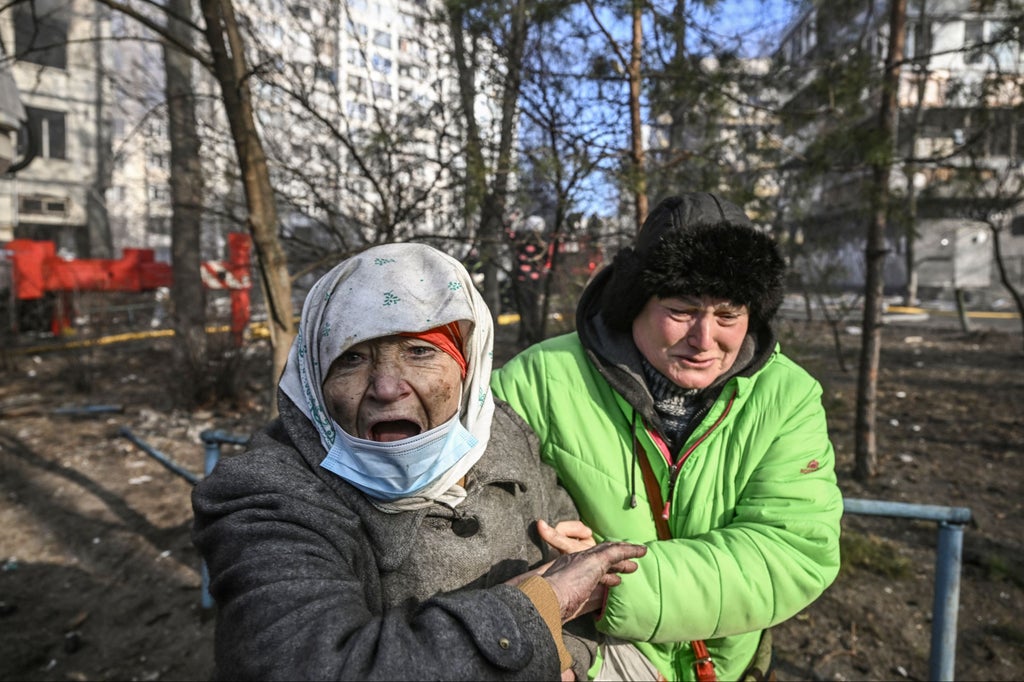 ayor Vitali Klitschko warned of a “difficult and dangerous moment” for Kyiv as Vladimir Putin stepped up bombardment of the city and a curfew began as Russian forces advanced upon the Ukraine capital.

Russia launched a flurry of strikes that blew out windows and ignited a huge fire in a 15-story apartment building.

Explosions around the city caused significant structural damage, with shockwaves from a blast tearing through the entrance of a central subway station that has been used as a bomb shelter.

Bombardment and attacks on other cities in Ukraine intensified.

Russian soldiers seized hundreds of civilians as hostages in a hospital in the besieged Ukrainian port of Mariupol, the regional governor said. “Russian occupiers have taken doctors and patients hostage,” Pavlo Kyrylenko, head of the eastern Donetsk region, wrote on his Telegram channel.

He said that one of the hostages had told local authorities that the Russians had herded 400 people into the hospital, including staff and patients, who had been unable to leave since yesterday. “We can’t get out of the hospital. They’re shooting a lot. We’re sitting in the cellar,” he quoted the unnamed hostage as saying.

There was some hope for the besieged city after days of shelling as authorities said 2,000 civilian vehicles had left along humanitarian corridor that ran 160 miles to the Ukraine-held city of Zaporizhzhia. A senior official later said 20,000 people had managed to leave.

Local officials estimate the siege of the city for more than fortnight has killed more than 2,300 people and said it had left residents desperate for food, water, heat and medicine.

Nearly three weeks into a Russian invasion, the number of Ukrainians fleeing abroad has approached 3 million, half of them children, according to estimates from the UN Refugee Agency

Despite entering an unstable warzone, the prime ministers of Poland, Slovenia and the Czech Republic arrived on Tuesday evening from Poland by train as Kyiv went under its curfew in a show of support and solidarity,

The first international leaders to visit President Vladimir Zelensky and the Ukrainian prime minister since Russia unleashed war on its neighbor on 24 February.

Poland’s leader Mateusz Morawiecki tweeted: “It is here, that freedom fights against the world of tyranny. It is here that the future of us all hangs in the balance.

“We must stop the tragedy”, he added.

Ukraine’s parliament voted to extend martial law for another month, until April 24. Under the measure, requested by Mr Zelenskyy, men between 18 and 60 are barred from leaving the country so they can be called up to fight.

In other developments a cameraman and a journalist working for Fox News had been killed, staff at the US network said.

Pierre Zakrzewski, 55, and Oleksandra Kuvshinova, 24, were killed when their vehicle was struck by incoming fire in Horenka, on the outskirts of Kyiv.

While a Russian journalist who protested against the war in Ukraine on a live TV news program was given a fine.

Marina Ovsyannikova, an editor at state-controlled Channel 1, was detained after she ran on to the set on Monday holding a sign saying “no war”.

She said she had been questioned for 14 hours and not slept for two days, and was not given access to legal help.