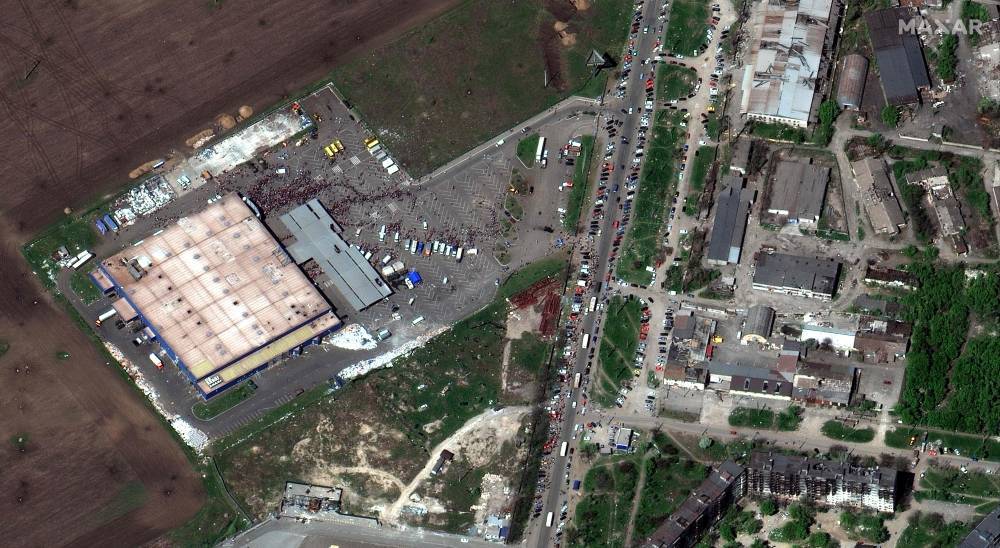 Kyiv – AFP
Early Saturday morning, a first group of civilians were evicted from the Azovstal steel factory, the last enclave of the Ukrainian resistance in Mariupol, eastern Ukraine, the area where the Russian army concentrates most of its forces.
Leaving 20 underground civilians out of this massive industrial complex is a first of its kind, as all previous evacuation attempts failed in this southeastern coastal town, which was almost completely destroyed after weeks of siege.
“Twenty civilians, women and children have been taken to a suitable location, and we hope to be able to evacuate them to Zaporizhzhya, which is in the area under control of Ukraine,” said Svyatoslav Balamar, deputy commander of the Azov battalion that this country protects. industrial area.
Hours earlier, Russia’s TASS news agency reported that 25 civilians, including six children, had left the Azovstal industrial complex, where, according to Kiev, hundreds of Ukrainian fighters and civilians still hide in a network of Soviet-era tunnels.
“The Azov Battalion continues to clear the debris to get the civilians out,” Ballamer said. We hope that this procedure continues until we can evacuate all civilians.”
Ukrainian President Volodymyr Zelensky addressed the issue in a video address Saturday evening, saying: “We are doing everything possible to ensure that the evacuation mission is carried out from Mariupol.”
Recent satellite images from Maxar Technologies, taken on April 29, show damage to nearly all buildings in the Azovstal steel mill complex.
United Nations Secretary-General António Guterres emphasized during his visit to Kiev on Thursday that the international organization is doing “what it can” to evacuate civilians trapped in the southeastern Ukraine’s city of Mariupol, with a population of one half year. million people before the start of the Russian attack in late February.
Full control of this city allows Moscow to connect the land it occupies to the south, especially the Crimean peninsula, which it annexed in 2014, with the separatist republics of Donetsk and Lugansk loyal to it to the east.
Particularly in the Ukrainian east, the Russian army, which outnumbers its Ukrainian opponents and is better armed, is trying to besiege Ukrainian forces from the north and south to bolster its control over Donbass.
It concerns the “second phase” of the “special military operation” launched on February 24 by Russian President Vladimir Putin following the withdrawal of Russian troops from northern Ukraine and the Kiev region after their failure to to gain control.
“It’s not the same as in 2014, there is no specific front along an axis,” said Irina Rybakova, a media official with the 93rd Brigade of the Ukrainian Armed Forces, referring to the war in which Kiev faced pro-Russian separatists in this region eight years ago, and it didn’t quite stop.
She added: “A village for them and a village for us: we have to imagine a chessboard,” stressing that “we can’t push the enemy away now.”
Zelensky warned that the Russians “have formed fortifications in the Kharkov region in an effort to increase pressure in the Donbass.”
Zelensky confirmed that the Russians “sent reinforcements to the Kharkov region in an effort to increase pressure on Donbass.”