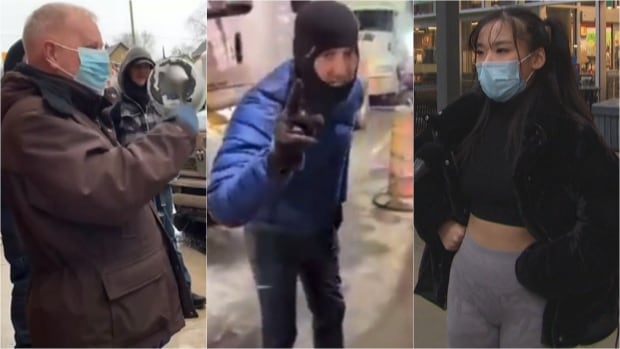 Some average Ottawans became internet sensations during the so-called Freedom Convoy protests over the past month as they expressed their frustrations toward protesters in their own, unique ways.

Since arriving at the end of January, truckers and protesters stayed for more than three weeks as protests evolved into an occupation of downtown Ottawa streets. Over the Family Day long weekend, police forces from across Canada helped Ottawa’s force clear out remaining trucks and protesters.

Meanwhile, some small and big acts from counter-protesters — like blocking the path of a dump truck on a residential street or banging a pot in the face of protesters — has not gone unnoticed by fellow local residents.

While many have posted online about the group, calling them Ottawa’s “Avengers,” others have stepped up to recognize Centretown’s popular counter-protesters in person.

We missed you all so much 💙

We would like to invite Blue Jacket guy, Balcony Man, Pot & Ladle man, 3 grannies and of course Zexi Li to dinner on us any time.

If you know them please pass this along ⚜️

“We would like to invite Blue Jacket guy, Balcony Man, Pot & Ladle man, 3 grannies and of course Zexi Li to dinner on us any time,” North and Navy restaurant tweeted this week.

Co-owner Adam Vettorel wanted to reach out while his Centertown restaurant reopened after disruptions caused by the protest.

“It just put a smile on our face and made us laugh at a time when there wasn’t a lot of that going around, and we just wanted to extend our thanks with the only way we know how,” Vettorel said.

Zexi Li is the face of a class-action lawsuit against some protesters, which brought about an injunction prohibiting participants in the convoy protest from using vehicle horns in the vicinity of downtown Ottawa.

The 21-year-old resident decided to lead the suit after she and her neighbors were subjected to relentless honking, random fireworks and choking diesel fumes from trucks parked near their homes.

“I kind of intentionally put a target on my back, but really, I’m more than happy to do so if it means that I can make a difference for the community,” Li told CBC News earlier this month.

When a small convoy of vehicles led by a dump truck tried rolling down their downtown residential street, Marika Morris, Lise Lebeau and Andrea Colbert decided to stand on the road and block their path.

“We just decided we had enough, and we thought we’d make a statement,” said Colbert earlier this month, as horns roared behind her.

“The only way to communicate with them was to stand in the middle of the road and make a thumbs down sign every time they honked,” Morris said at the time.

Last week, after all the trucks had left her neighbourhood, Colbert said “all I did was tell a truck to eff off.”

“I think that’s why it went viral. Because everyone wanted to do the same thing, and so we’re happy to do it for you,” she said.

“Blue Jacket Man,” as the internet calls him, took a slightly bigger risk than the Cooper Street ladies.

One evening he strode into the middle of a street full of big rigs to tell protesters they’d come to the wrong city.

My only regret about it … I wish I had not dropped as many F-bombs. My mom wasn’t really happy about that.– Paul Atkinson

“Go to talk to Doug Ford!” hey yells in the video, using profanities. “Do you know anything about civics?”

Paul Atkinson told CBC he and a few neighbors decided to go out and stand up for residents after seeing a Tweet showing a counter-protester holding a sign that said: “We will not be held hostage in our own city.”

“That’s when the guy in the big rig got on their horn and whaled on it, for, it must have been two-three minutes,” Atkinson explained in the moments leading up to his angry rant.

“I was able to channel my rage into a bit of a diatribe,” Atkinson said.

“My only regret about it, and I only have one, was that I wish I had not dropped as many F-bombs. My mom wasn’t really happy about that.”

In a video tweet captured by a CBC reporter, a man is seen banging on a pot in a street corner as what appears to be convoy protesters try and convince him to stop.

“I was walking to a pre-arranged meeting with a group of cross-border truckers on Lyon and Queen [streets] when I walked by this situation,” said the CBC’s Jorge Barrera.

“I couldn’t get a word in on the individual banging the pot. He just kept banging.”

The video Barrera posted of the pot-banging man “exploded” on social media, he added, with over one million views.

CBC has tried contacting the individual, but wasn’t able to get an interview.