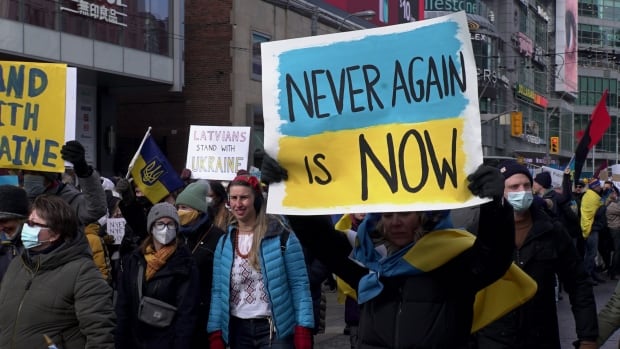 Thousands of people marched in downtown Toronto on Sunday to protest the Russian invasion of Ukraine.

The event, billed as “Mega March for Ukraine,” began at Yonge-Dundas Square. It was organized by the Toronto branch of the Ukrainian Canadian Congress.

Demonstrators marched west on Dundas Street West, then south on Bay Street to Nathan Phillips Square. Speakers are addressing thousands of people who have gathered in the square.

Chrystia Freeland, Canada’s deputy prime minister who walked at the front of the march, told the rally that Ukraine needs weapons and ammunition to fend off the Russian invasion.

“The Ukrainians are making such a brave stand but they need weapons to fight this fight,” Freeland said.

During the march, the crowd chanted: “Stand with Ukraine!”

Hundreds of people at a rally in support of Ukraine in Toronto pic.twitter.com/gSAu12I1Ls

More from the rally in support of Ukraine in Toronto. The couple in the last photo are Russian pic.twitter.com/DqY2xw32mx