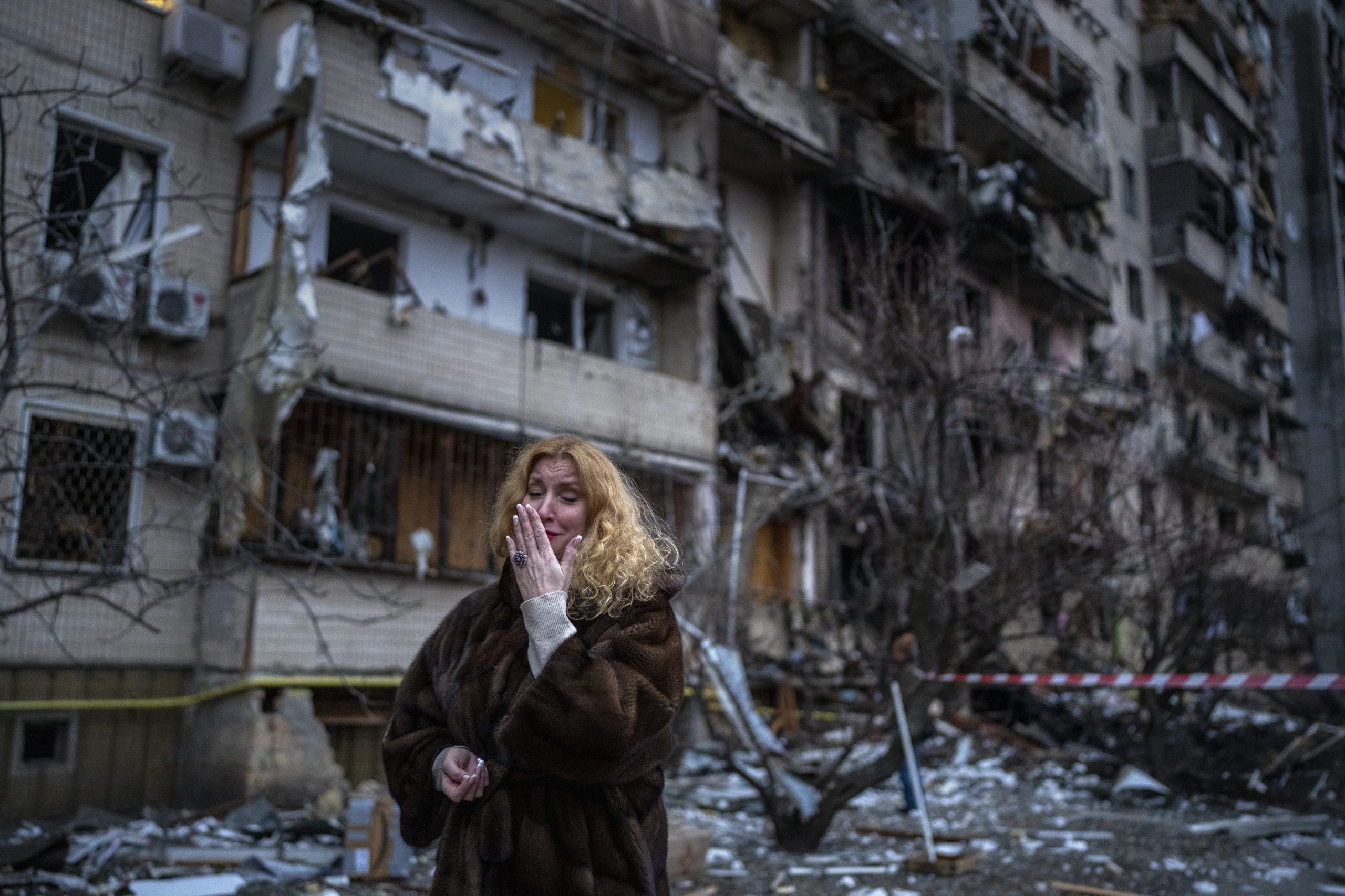 On the fourth day of the biggest assault on a European state since World War Two, the Ukrainian president’s office said negotiations between Kyiv and Moscow would be held at the Belarusian-Ukrainian border. They would meet without preconditions, it said.

Thousands of Ukrainian civilians, mainly women and children, were fleeing from the Russian assault into neighboring countries.

The capital Kyiv was still in Ukrainian government hands, with President Volodymyr Zelenskiy rallying his people despite Russian shelling of civilian infrastructure.

View from a building in Kyiv after a Russian Strike. A fire broke out at an oil storage facility in the city of Vasilkov near the Ukraine capital early on February 27, 2022. Photo by Raphael Lafargue/ABACAPRESS.COM.

But Putin, who has described the invasion as a “special military operation”, thrust an alarming new element into play on Sunday when he ordered Russia’s deterrence forces – a reference to units which include nuclear arms – onto high alert.

He cited aggressive statements by NATO leaders and economic sanctions imposed by the West against Moscow.

“As you can see, not only do Western countries take unfriendly measures against our country in the economic dimension – I mean the illegal sanctions that everyone knows about very well – but also the top officials of leading NATO countries allow themselves to make aggressive statements with regards to our country,” Putin said on state television.

US Ambassador to the United Nations Linda Thomas-Greenfield said that “President Putin is continuing to escalate this war in a manner that is totally unacceptable and we have to continue to stem his actions in the strongest possible way”.

Russian soldiers and armored vehicles have rolled into Kharkiv, Ukraine’s second-largest city, and witnesses reported firing and explosions. A natural gas pipeline was blown up before daybreak, a Ukrainian state agency said.

But city authorities said Ukrainian fighters had repelled the attack.

“Control over Kharkiv is completely ours! The armed forces, the police, and the defense forces are working, and the city is being completely cleansed of the enemy,” regional Governor Oleh Sinegubov said.

SA Labor has promised to deliver 350-extra ambos and 36 more ambulances if they win the next state election.

The Opposition’s latest health pledge, costing $107.8m in additional funding, would see 278 paramedics and 72 ambulance officers join the SA Ambulance Service over the next four years.

Labor says the “unprecedented’ investment will allow the creation of eight 16-person emergency crews in metropolitan Adelaide and 17 across regional South Australia, including in “priority locations” such as Mount Barker, Victor Harbor, Goolwa and the Limestone Coast.

Over the weekend, Labor also promised to build a new $120m central SAAS headquarters in Adelaide which would include a new emergency operations centre, ambulance station and state health control centre.

The Opposition has now racked up close to $1b in health spending promises, following pledges last week to recruit 300 more nurses, 100 more doctors and build 300 more hospital beds across the state.

Labor said the latest investment was based on “feedback from frontline paramedics on the specific areas of greatest need”.

Opposition leader Peter Malinauskas, who last week tempered expectations that his party would be able to end ramping once and for all, said the state “need(s) to look after our emergency responders who do some of the most difficult and challenging work in caring for our community”.

“Labor will invest in this vitally important service for South Australians, boosting numbers of paramedics and ambulance officers and providing new infrastructure – and ultimately providing a better service for our community,” he said in a statement.

The Liberals are pledging $19m towards a range of transport investments – including “high-performance buses” – to improve commuting between the city and the burgeoning Adelaide Hills, but are facing criticism from a local MP for the time it will take for the package to come online.

Transport Minister Corey Wingard on Sunday unveiled a Hills transport spending package which includes $10m for a fleet of 15 “dedicated, higher-performance buses” designed to operate at higher speeds in the Hills, along with $6 million to expand the Park ‘n’ Ride at Crafers with 140 extra parking spaces.

The remaining $3 million will be spent on a depot for the new bus fleet and a study to investigate a new Park ‘n’ Ride facility near Bridgewater.

The new package, however, does not include a passenger rail transport option on the existing rail corridor, after an Infrastructure SA report released last month it would “not come close” to buses and cars on reliability and travel time.

The new buses and expanded Crafers Park ‘n’ Ride are due to be in place by 2024.

“The new high-frequency express service will see buses run between Hills Park ‘n’ Rides and the city every 6-8 minutes during peak period, every 10-15 minutes interpeak and 20-30 minutes at night, with the journey in each direction expected to be about five minutes quicker,” Wingard said.

“Faster and more regular services, together with improved Park ‘n’ Ride facilities, will make public transport a much more attractive option for people commuting between the Hills and the city.”

But Kavel MP Dan Cregan, who defected from the Liberals in October and was later elevated to the speakership as an Independent, criticized the Government for the timeframe of the investments.

“While I strongly support investments in Hills public transport, including buses, it is incredible that it will take until 2024 to deliver,” Cregan said in a statement.

“As well, Onkaparinga Valley communities still have no Sunday bus service at all.

“My community remains deeply skeptical of promises on bus services after proposed cuts to Hills bus routes in 2020. At that time, over 600 people signed our petition to save the 841F bus service.”

Cregan’s seat of Kavel is one of the most prized at this year’s election. The Liberals are running local fitness studio operator and Mayo Federal Electorate Conference president Rowan Mumford to win it back.

Another person has died in floodwaters in Queensland taking the death toll to seven, as the state braces for more heavy rain as a week-long flood crisis continues to impact thousands of residents in the state’s south-east.

The 59-year-old Carseldine man died at Fitzgibbon, a suburb north of Brisbane, on Sunday afternoon, Queensland Police said this morning.

He was trying to cross Cabbage Tree Creek on foot when he was swept away.

Two witnesses raised the alarm and went to his aid but despite their best efforts and those of attending paramedics he died at the scene.

Almost a thousand schools will be closed in 13 local government areas on Monday, and residents are being warned to avoid all non-essential travel.

Transport and Main Roads Minister Mark Bailey said there will be significant road closures and limited public transport options across the region.

“We’ve had to close parts of the Gateway Motorway, Ipswich Motorway, Bruce Highway, and dozens of major roads across southeast Queensland,” Bailey said in a statement on Sunday night.

Prime Minister Scott Morrison was due to give a speech in Brisbane on Monday to the Queensland Media Club but the event has been postponed due to extensive flooding across Brisbane.

“This is a serious natural … flooding event that we are seeing impact right throughout everywhere from Bundaberg to the border,” Morrison said in Brisbane on Sunday.

“All the way out to Toowoomba and particularly in places like Gympie, this is a very serious situation.”

Severe weather warnings remain in place as a new system of storms track towards the state’s battered southeast, heightening fears that the long-running flood emergency could worsen, especially in Brisbane.

More than 1400 homes along the Brisbane River are expected to be inundated, with more heavy rain forecast for the city stoking fears its swollen river could rise even further.

A young woman has died after her car crashed into a tree north of Adelaide yesterday afternoon with police now seeking information about a large fluid spillage they believe was on the road.

Police say emergency services were called to Redbanks Road in Kangaroo Flat, near Gawler, shortly after 1.30pm on Sunday following reports a Honda sedan had left the road and crashed into a tree.

A 23-year-old woman from Wasleys, the driver and sole occupant, died at the scene.

Police say Major Crash Investigation officers are now seeking information about “a large fluid spill/leak from a vehicle” along Redbanks Road that they believe occurred sometime on Sunday.

The road was due to reopen at 6.30am this morning, according to Traffic SA.

A hotel in Price on the Yorke Peninsula is the latest to be identified as a “high-risk location” by SA Health, after a number of COVID-19 exposure sites were listed in Port Lincoln over the weekend.

In an update late yesterday, SA Health said the Wheatsheaf Hotel in Price has been associated with positive cases of COVID-19.

Anyone who was there from Saturday, February 19 from 4.00pm to 12.30am the following morning is asked to closely monitor for symptoms and get a PCR test as soon as they develop.

It comes after four locations in Port Lincoln – the Ravendale Community Sports Centre, Grand Tasman Hotel, Pier Hotel and Hotel Boston – were all listed as “high risk locations” by SA Health on Saturday.

Exposure times for the four locations range from Friday February 18 to Sunday February 20.

Full details of exposure site locations and times can be found on SA Health’s website.

South Australia recorded two COVID-19-linked deaths and 1467 cases on Sunday, with the number of people in hospital down to 114.

– With AAP and Reuters