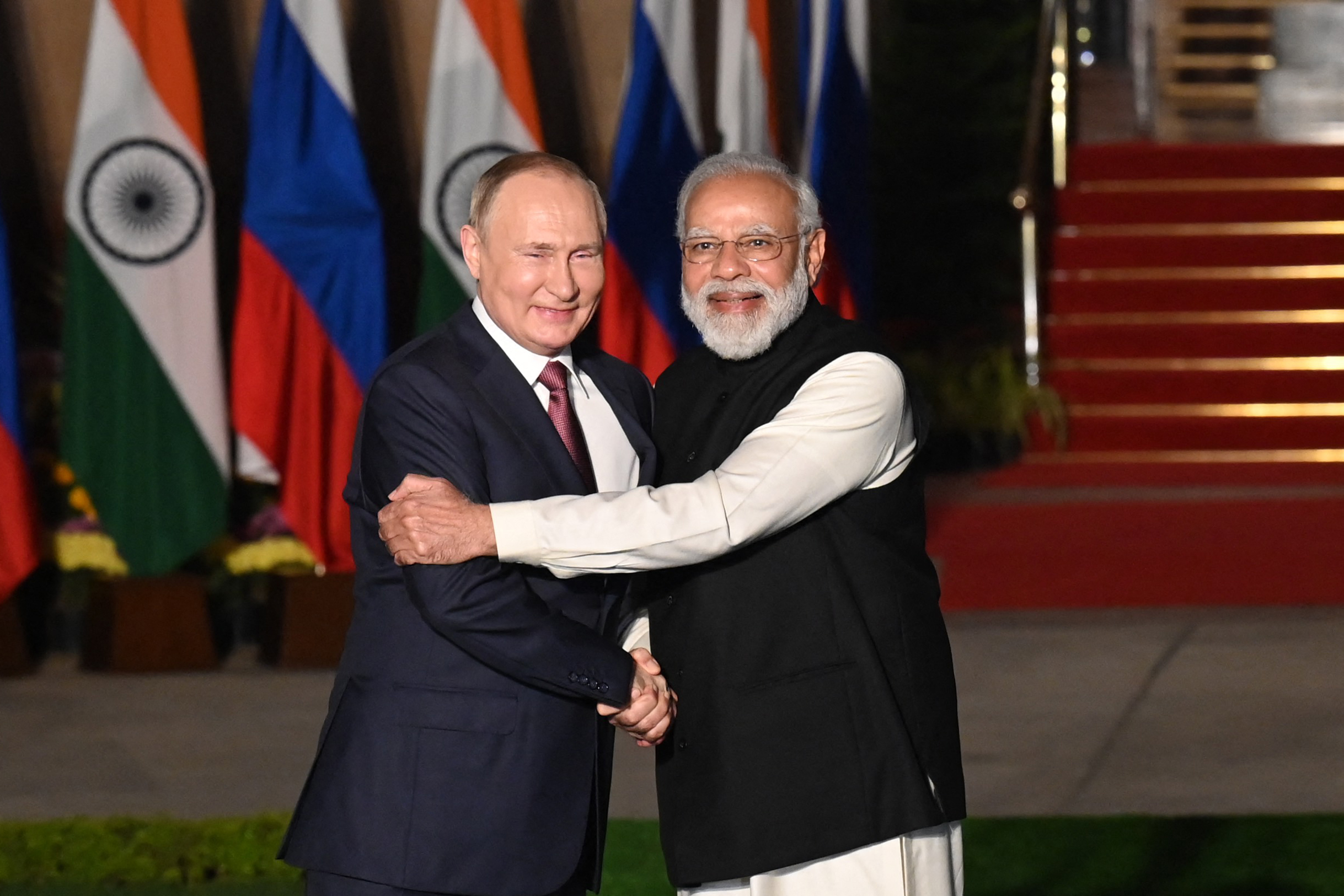 The United States’ effort to condemn Russia’s military operations in Ukraine at the United Nations Security Council was unsurprisingly vetoed by Moscow, but three other powers spoiled a consensus as well, including two partners of Washington along with its top rival.

As China, India and the United Arab Emirates doubled down on their abstentions Sunday during another vote that ultimately passed despite Russia’s opposition on holding an emergency session of the UN General Assembly, news week spoke with leading experts from the trio of countries to determine why their nations opted to stay neutral and still pursue closer ties with Moscow.

Russian President Vladimir Putin’s decision to conduct a “special military operation” to “demilitarize” and “de-Nazify” Ukraine was met with widespread backlash among US allies and partners across the globe. At a fiery UN Security Council gathering on Friday, France and the United Kingdom, along with the sole Eastern European representative Albania voted alongside their ally the US to censure Russia, as did neutral fellow Europe’s Ireland and Norway, Africa’s Gabon, Ghana and Kenya along with Latin America’s Brazil and Mexico.

Despite Washington’s efforts to court India in recent years as an effort to counter Beijing in the Asia-Pacific region, New Delhi took a neutral stance, a likely nod to its longstanding partnership with Moscow that stems back to the Cold War.

Harsha Kakar, a retired major general of the Indian Armed Forces who also led the department of strategic studies at India’s College of Defense Management, told news week that his country’s decision was rooted in “India’s traditional ties with Russia, including defense deals and continued dependence on weapon spare parts and imports including S-400 missile systems.”

“This makes Russia a close ally,” he said.

India’s decision to acquire the S-400 surface-to-air missile system and foster closer military ties with Russia has been a sticking point in the U.S’. attempt to further integrate the South Asian power into its broader geopolitical goals. However, unlike Turkey, a US NATO ally that also purchased the S-400, India has not yet faced sanctions for its decisions, highlighting the country’s importance to US strategy.

Kakar also pointed to other areas of critical ties between Moscow and New Delhi, including their interactions as part of BRICS alongside Brazil, China and South Africa, as well as the trilateral RIC forum with China.

“Growing strategic relations with the US cannot imply India dumps its ally Russia,” Kakar said. “The US would understand Indian compulsions.”

He also referenced India’s relations with Ukraine, noting they “involve defense deals including spares for naval gas turbine engines and upgrading of the AN [Antonov] fleet of aircraft.” But he cited the words of India’s top diplomat in illustrating these ties were dwarfed by the need for positive ties with Russia.

Elsewhere in Asia was another holdout from U.S’. hopes to present a united front against Russia.

Former US Defense Secretary James Mattis famously nicknamed the UAE “little Sparta” due to its outsized posture in the fraught security situation of the Persian Gulf region. But in addition to seeking US military support in the face of tense times with nearby Iran, Abu Dhabi has also eyed closer ties with Moscow in a number of sectors, including defense.

The trend was on full display in recent UAE arms expos in which an array of Russian weapons were showcased. Parallel to this has been a greater US hesitance to sell military equipment to the UAE due to concerns of civilian casualties in the ongoing war in Yemen and of Abu Dhabi’s growing relationship with Beijing.

Frustration over China’s footprint in the UAE appeared to be a central factor in the stalling of the Pentagon’s plans to sell F-35 fighter jets to the Arab state. After months of uncertainty, Abu Dhabi informed Washington in December that it was suspending plans to acquire the advanced warplane.

Abdulkhaleq Abdulla, a professor of political science in the UAE, told news week that the UAE’s decision to abstain from weighing in on Russia’s actions in Ukraine “is consistent with the new UAE foreign policy activism, which stems from being confident of its decisions and its approach to global and regional politics.”

“Confidence has a lot to do with this vote,” Abdulla said, “that finally we are independent enough, competent enough to take this kind of position, which is consistent with our own way of doing things and it does.”

“Maybe it doesn’t resonate too well in Washington,” he added, “but that’s the way things are going to be from now on.”

As the UAE’s top diplomat prepares to visit the Russian capital, Abdulla said that the UAE has been in touch with Washington including in recent calls between Sheikh Abdulla and US Secretary of State Antony Blinken. The Emirati expert said he did not believe the trip “is going to be of any surprise to Washington” and even suggested there may be a peacekeeping capacity to the high-level trip.

“This visit is important and maybe there is a way for the UAE to do some kind of mediation between Moscow and Washington to ease tension,” Abdulla said. “That’s primarily why he’s going.”

And while the UAE continues to consider the US an important partner, he argued that the focus of this relationship has been tempered by Washington’s endeavor to shift foreign policy priorities from maintaining security in the Middle East to countering China in Asia, and more recently shore up efforts against Russia in Europe.

“I think it’s dawning on us,” Abdulla said. “It is becoming like something on the near horizon, America is pulling back.”

In response to what he termed a “retreat” from the region, Abdulla said that the “UAE, like many countries in the region, are positioning themselves for this post-America, Middle East and post-Gulf Middle East, so I think this thinking is sinking in.”

As a result, Abdulla said that “Asia is definitely the future, and I think, if that is so, then Asia has become bigger and bigger in our strategic thinking.” While “China is only one” aspect of this new trajectory, he indicated it would be an increasingly important one.

“If there is this post-American world post-America Gulf, correspondingly there will be more of China,” he said. “Less of America probably translates into also more of China, in the region and throughout, by the way.”

With China assuming an increasingly central role on the world stage, even the US had appealed to the People’s Republic to use its influence with Moscow to deescalate the crisis that ultimately led to war in Europe.

But as relations between Beijing and Washington have eroded in recent years, fewer areas of common ground have emerged. At the same time, Putin and Chinese President Xi Jinping have only fortified their “comprehensive strategic partnership of coordination for the new era,” an unprecedented bond between the two that was reinforced during their high-profile summit at the beginning of the Winter Olympic Games in Beijing earlier this month.

The two countries have often joined forces to wield their vetoes at the UN Security Council on issues proposed by the US and, while Beijing opted to abstain on Friday, Chinese officials have also backed Moscow’s concerns regarding NATO expansion and US military support for Ukraine as being central factors that have inflamed the crisis and ensuing war.

And while President Joe Biden’s administration has sought to prove inconsistencies between Beijing’s stated commitment to respect sovereignty and its tacit backing for Moscow’s intervention in Ukraine, the stark worsening of the US-China relations on a range of issues, most critically Taiwan, has left little room for common ground between the two leading powers.

On Saturday, local time, the US Navy’s Arleigh Burke-class guided-missile destroyer USS Ralph Johnson transited the Taiwan strait as part of a “routine operation” designed to challenge China’s claim to the waterway between the mainland and the self-ruling island Beijing considers a part of its territory.

People’s Liberation Army spokesperson Senior Colonel Shi Yi issued a statement in response saying that the Eastern Theater Command mobilized its forces to closely monitor the US warship’s passage, an act considered a provocation by Beijing.

“The US has carried out this provocative act, trying to support the ‘Taiwan independence’ forces by making some gestures, which is both hypocritical and futile,” Shi said. “The theater troops maintain high alert at all times and resolutely safeguard national sovereignty and security and regional peace and stability.”

The South China Sea Probing Initiative, a Chinese observer group that monitored and reported on the USS Ralph Johnson‘s movements, said that, even as Washington sought to address an explosive situation in Europe, the US has kept up challenges to China in the Asia-Pacific.

“Based on our observations in the recent two months, the US military presence and activities around China have not weakened, but have continued to increase,” the South China Sea Probing Initiative told news week† “We agree that the United States still wants to focus its Indo-Pacific strategy while dealing with the crisis in Ukraine.”

Chinese officials have emphasized, including to news week, that there was no comparison between Russia’s approach to Ukraine and China’s toward Taiwan, and Taiwanese officials have also sought to downplay an association between the two situations. At the same time, the Chinese monitor pointed out the likely concerns in Taipei as another US partner came under direct attack by a nation questioning its sovereignty.

“Taiwan authorities have openly stressed ‘the difference between Taiwan and Ukraine’ and showed confidence on the situation of Taiwan Strait, however, at heart, they must be very worried about the credibility of US commitment now,” the South China Sea Probing Initiative said .

The Chinese monitor added that Washington’s approach to Taiwan had influenced Beijing’s stance in Europe.