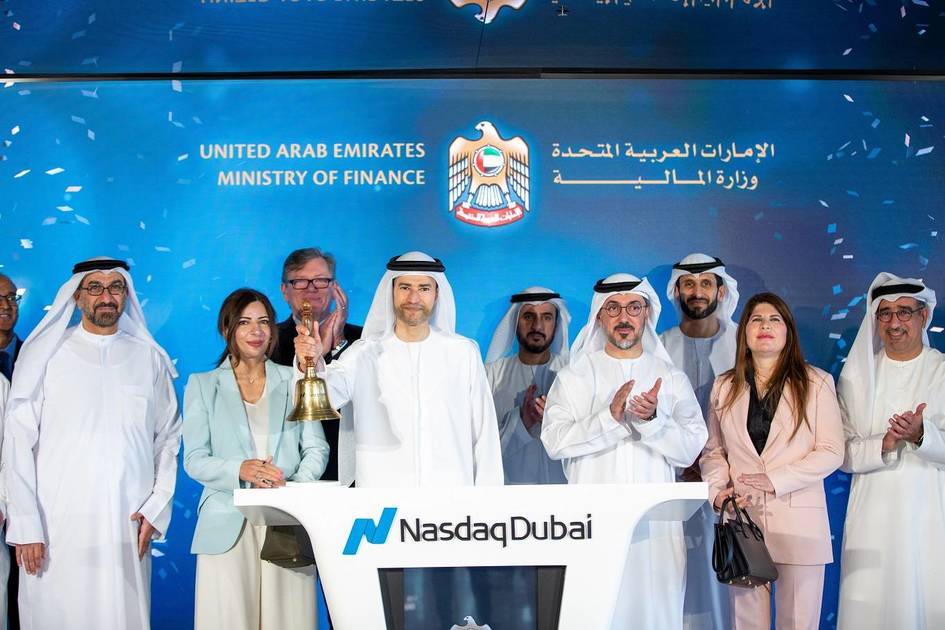 Plans to spend 6 chips for 9 billion dirhams
†
Dubai: “The Gulf”
On Thursday morning, Mohammed bin Hadi Al Husseini, Secretary of State for Financial Affairs, rang the bell at Nasdaq Dubai to celebrate the listing and circulation of the first government bond issue denominated in the local currency, the dirham, issued by the federal government. government through the Ministry of Finance, with a total value of 1.5 billion dirhams.
This issuance is part of an ambitious strategy that includes a series of government bond issuances to develop the fixed income market in the United Arab Emirates by providing investors with investment opportunities in government bonds, and an appropriate measure of the yield curve on investments in debt instruments.
The whistleblowing ceremony was held in the presence of Ibrahim Al Zaabi, Assistant Governor of the UAE Central Bank – Monetary Policy and Financial Stability, Hamed Ali, CEO of Dubai Financial Market and Nasdaq Dubai, and CEOs of the six main participating banks, in addition a number of senior officials from different participating entities.
The inaugural issuance of the dirham-denominated program of federal treasury bonds received a wide response from investors across the region and the world as subscription volume reached 6.3 times in the first auction, which closed successfully this week. The Ministry is working to issue 6 government bonds in 2022 worth 9 billion dirhams, with the value of the two tranches (for two and three years) in the first auction being 1.5 billion dirhams, with an interest rate of 3. 01% and 3.24% respectively, while the issue will be. The other tranches are later this year with different periods up to 5 years.
Economy Strength
Al-Husseini stressed that the success of the first federal government bond auction is another step to strengthen the strength of the national economy and achieve sustainable economic development, and comes as a continuation of the efforts of the UAE government to financial market and improve the investment climate, which is a testament to the strength of creditworthiness it enjoys. The country is one of the most competitive and advanced economies in the world.
He pointed out that the demand for government bonds confirms the position and confidence the UAE enjoys as the ideal investment destination for investors and entrepreneurs in the region, due to the extensive logistics and infrastructure it offers. His Excellency said: “The Federal Treasury Bonds program is helping to revitalize the local financial and banking sector, providing alternative financing options for investors and reflecting the strength of indicators for economic development, the stability of the financial system and the resilience of national economy will continue its momentum and leadership during the next phase in the context of the transition to the new economic model within projects The fiftieth year, establishing a diversified knowledge-based economy based on innovation, leadership and advanced industries .
capital markets
For his part, Khalid Mohammed Balama, Governor of the UAE Central Bank, said: “The issuance of UAE dirham bonds is part of the UAE’s willingness and commitment to develop capital markets activities and enhance its position as a global financial to consolidate the institution. It also reaffirms the strength and stability of the financial system and the confidence of local and international investors in the UAE’s ability to develop the financial sector according to monetary policy and strategic plans.
For his part, Hamed Ali, Chief Executive Officer of NASDAQ Dubai and Dubai Financial Market, said: “NASDAQ Dubai is pleased to make an effective contribution to achieving the strategic objectives of the UAE Government in developing the capital markets in the country government bonds denominated in the local currency dirham confirms the strategic commitment to strengthen the capital market activities, especially the debt market, through the issuance of government bonds Nasdaq Dubai welcomes the second listing of bonds by the federal government in six months the best proof of the great faith in the world-class integrated financial markets structure afforded by the exchange, which supports the issuance and listing of fixed income instruments issued by sovereign and commercial entities, both locally and globally.
It is noteworthy that in October 2021, the Ministry of Finance had listed the UAE’s government bonds worth US$4 billion as the first issue of UAE government bonds on Nasdaq Dubai. The listing of government bonds today bolsters Nasdaq Dubai’s position as the leading platform for listing fixed income instruments both locally and internationally in the Middle East for a total of $102 billion. The Ministry of Finance has appointed six agent banks as primary distributors for participants in the first T-bond auction and is responsible for secondary market development, including Abu Dhabi Commercial Bank, Emirates NBD, First Abu Dhabi Bank, HSBC, Mashreq and chartered by default.