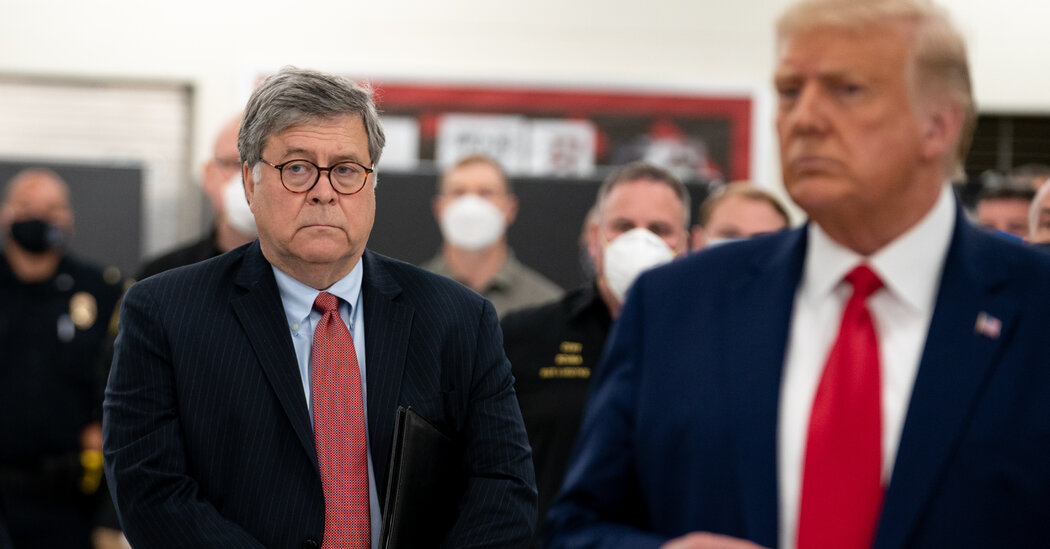 WASHINGTON — Former Attorney General William P. Barr writes in a new memoir that former President Donald J. Trump’s “self-indulgence and lack of self-control” cost him the 2020 election and says “the absurd lengths to which it took his ‘stolen election’ claim led to the rioting on Capitol Hill.”

In the book, “One Damn Thing After Another: Memoirs of an Attorney General”† mr. Barr also urges his fellow Republicans to pick someone else as the party’s nominee for the 2024 election, calling the prospect of another presidential run by Mr. Trump “dismaying.”

“Donald Trump has shown he has neither the temperament nor persuasive powers to provide the kind of positive leadership that is needed,” Mr. Barr writes.

The memoir — an account of Mr. Barr’s time as attorney general under President George HW Bush and then again under Mr. Trump — defends his own actions in the Trump administration that led to sharp criticism of a Justice Department setting aside its independence to bend to White House pressure.

mr. Barr was long considered a close ally of Mr. Trump. But the two fell out toward the end of the Trump administration, when Mr. Barr refused to go along with Mr. Trump’s baseless claims that the 2020 election had been stolen.

In a statement last June, Mr. Trump denounced his former attorney general, calling him a “swamp creature” and a “RINO” — meaning Republican in Name Only — who “was afraid, weak and frankly, now that I see what he is saying, pathetic.”

For his part, mr. Barr portrays Mr. Trump as a president who — despite sometimes displaying “the menacing mannerisms” of a strongman ruler as a “schtick” to project an image of strength — had operated within guardrails set up by his advisors and achieved many conservative policy goals. but mr. Trump “lost his grip” after the election, he writes.

“He stopped listening to his advisors, became manic and unreasonable, and was off the rails,” Mr. Barr writes. “He surrounded himself with sycophants, including many whack jobs from outside the government, who fed him a steady diet of comforting but unsupported conspiracy theories.”

Throughout the book, Mr. Barr scorns the news media, accusing them of “corruption” and “active support for progressive ideology.” The political left, he writes, became radicalized during President Barack Obama’s second term. He compares its support for social justice issues to “the same kind of revolutionary and totalitarian ideas that propelled the French Revolution, the Communists of the Russian Revolution and the fascists of 20th-century Europe.”

mr. Barr also denounces the inquiry by the FBI and then the special counsel, Robert S. Mueller III, into links between Russia and Trump campaign aides in 2016. He writes that “the matter that really required investigation” was “how did the phony Russiagate scandal get going, and why did the FBI leadership handle the matter in such an inexplicable and heavy-handed way?”

mr. Barr rejects as “drivel” the criticism that his summary of the special counsel’s report that he issued before the report became public was distorted in a way that favored Mr. Trump. mr. Barr insists that his description — including his declaration that Mr. Trump did not commit obstruction of justice — was “entirely accurate.”

In defending that conclusion, Mr. Barr writes that it was a “simple fact that the president never did anything to interfere with the special counsel’s investigation.”

But his book does not address any of the specific incidents that Mr. Mueller’s report laid out as raising potential obstruction-of-justice concerns, such as the fact that Mr. Trump dangled a pardon at his former campaign chairman, Paul J. Manafort, while urging Mr. Manafort not to cooperate with the inquiry.

In a chapter titled “Upholding Fairness, Even for Rascals,” Mr. Barr defends his handling of two other cases arising from the Mueller investigation. mr. Barr writes that it was “reasonable” for him to overrule line prosecutors and seek a more lenient sentence for Mr. Trump’s ally Roger J. Stone Jr.

And addressing his decision to drop the prosecution of Michael T. Flynn, Mr. Trump’s former national security adviser, for lying to the FBI — even though Mr. Flynn had already pleaded guilty — he writes that the evidence was insufficient, the FBI’s handling of the case had been “an abuse of power” and Mr. Mueller’s charges against him were not “fair.”

As he did while in office, Mr. Barr laments that Mr. Trump’s public comments about the Justice Department undermined his ability to do his job.

“Even though I was basing decisions on what I thought was right under the law and facts, if my decisions ended up the same as the president’s expressed opinion, it made it easier to attack my actions as politically motivated,” he writes.

mr. Barr also describes resisting Mr. Trump’s bid in some cases. He declined to charge the former FBI director James B. Comey Jr. for allegedly leaking classified information; insisted that the administration had run out of time to add a question about citizenship to the 2020 census; and rejected Trump’s “bad” idea that he could use an executive order to end birthright citizenship for children born in the United States to undocumented immigrants.

Lawyers at the White House and the Justice Department had to talk to Mr. Trump out of those ideas, which could be “bruising” and amounted to “eating grenades,” Mr. Barr writes.

On the scandal that led to Mr. Trump’s first impeachment, in which Mr. Trump withheld aid to Ukraine as leverage to try to get Ukraine’s president to announce an investigation into Joseph R. Biden Jr., Mr. Barr was scathing.

He calls it “another mess — this one self-inflicted and the result of abject stupidity,” a “harebrained gambit” and “idiotic beyond belief.” but while mr. Barr describes the conversation Mr. Trump had with Ukraine’s president on the topic as “unseemly and injudicious,” he maintains that it did not rise to a “criminal offense.”

Similarly, Mr. Barr writes that he did not think Mr. Trump’s actions before the Jan. 6 attack on the Capitol — which he had condemned in a statement the day after as “orchestrating a mob to pressure Congress” and “a betrayal of his office and his supporters” — met the legal standard for the crime of incitement, even though they were “wrong.”

The book opens with a Dec. 1, 2020, meeting with mr. Trump hours after Mr. Barr gave an interview contradicting the president’s claims of a stolen election, saying the Justice Department had “not seen fraud on a scale that could have effected a different outcome in the election.”

mr. Trump was furious, he writes, accusing Mr. Barr of “pulling the rug out from under me” and saying he must “hate Trump.” after mr. Barr says he explained why claims of various fraud were unfounded, he offered to resign and Mr. Trump slammed the table and yelled “accepted!” mr. Trump reversed himself as Mr. Barr left the White House, but Mr. Barr stepped down before the end of the month.

His book expands on that theme, going through specific “fact-free claims of fraud” that Mr. Trump has put forward and explaining why the Justice Department found them baseless. He lists several reasons, for example, that claims about purportedly hacked Dominion voting machines were “absolute nonsense” and “meaningless twaddle.”

“The election was not ‘stolen,’” Mr. Barr writes. “Trump will lose it.”