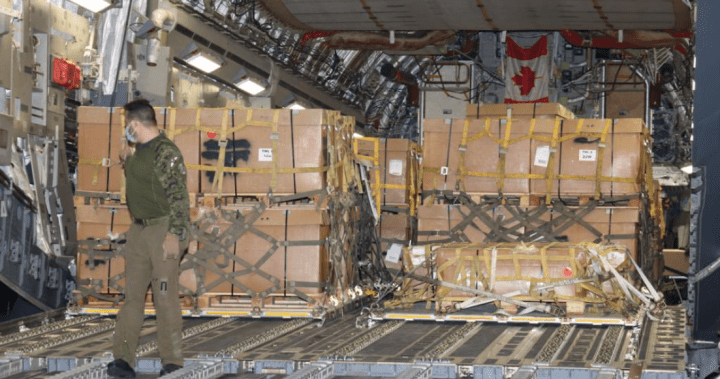 Joly said at a virtual press conference that the equipment will include body armour, helmets, gas masks, and night vision gear as requested by Ukraine.

“We will send more,” said Jolly, adding that Canada is working with allies to “suffocate” the Russian regime.

She also said that the Russian regime is being hit from all angles for its ongoing attacks on Ukraine and that “soon there will be nowhere left for them to hide.”

Canadian Defense Minister Anita Anand also announced that as of Sunday additional airlift support facilitated by the Canadian Armed Forces has been approved.

She said the first aircraft will depart for Europe ​on Monday to be used by NATO in delivering the protective gear to Ukraine.

Anand said Canada will also be providing Ukraine with experts in cyber security, including cyber threat intelligence, to help Ukraine defend its networks against cyber​-attacks.

The Associated Press reported that Ukrainian government and banking websites were knocked offline with another wave of distributed-denial-of-service attacks on Feb. 23. The targets included the defense, foreign and interior ministries, as well as Privatbank, the country’s largest commercial bank.

“Cyber-attacks are increasingly forming a part of modern-day warfare. I want to reassure Canadians that we do have the tools to keep Canadians and Canada’s own cyber environment secure,” said Anand.

​She ​again ruled out the possibility of a combat mission where ​Canadian troops would be sent to fight in Ukraine. However, she said that the lethal aid previously sent to Ukraine has been delivered in full.

The lethal equipment and ammunition sent earlier in February were worth $7.8 million.

Anand said there remains​ 3,400 Canadian military members ​from all branches who are ready to be deployed to the NATO response force if called upon.

When asked by the press about what Putin’s next steps ​might be, she said “only Putin knows what Putin will do.”

In the meantime, she said Canada will work hard with its allies to deliver the protective gear as quickly as possible.

“The world has undoubtedly become a more dangerous place, ​(even) while these dangers can sometimes seem far away to Canadians,” she said.

“Our insularity is eroding as geopolitical fractures … sow chaos and uncertainty through these tumultuous times. We must unite as a country and redouble our efforts to support our alliances and trusted international partners.”

-With files from The Associated Press