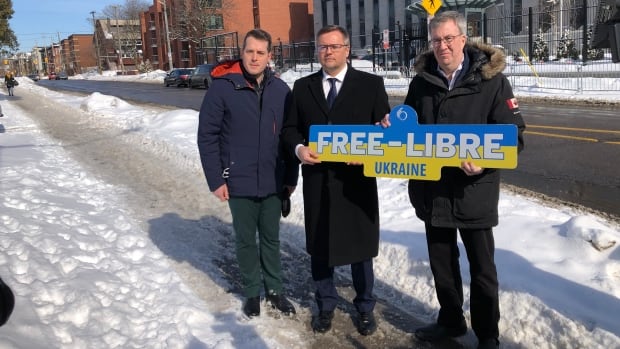 In a show of solidarity and support for Ukraine and its people, the City of Ottawa has installed street signs reading “Free-Libre Ukraine” along Charlotte Street in the Sandy Hill neighborhood — right in front of the Russian Embassy.

Eight yellow and blue signs — the colors of the Ukrainian flag — went up along the street Wednesday afternoon.

“This is a small symbol of defiance,” said Ottawa Mayor Jim Watson, who held the signs for a photo-op.

“Every single day a Russian employee goes into that building, they will be reminded with these signs looking down on them that they are engaged in war crimes, and an illegal war and an illegal invasion of a beautiful, peaceful country.

Watson said he has not spoken to anyone at the Russian Embassy and has no plans to contact anyone while the invasion is ongoing. He called the ambassador’s earlier comments trying to justify the invasion as “nonsense.”

“It was really disgraceful behavior for a diplomat. So, I consider the ambassador and those people supporting the Russian government as persona non grata,” he said.

“We’re absolutely aghast and angry at this war crime that is being committed by Mr. Putin.”

Yesterday, I sent a letter to Minister Fraser to work with the Department of Immigration, Refugees and Citizenship to identify resources and opportunities to welcome Ukrainians to Ottawa. See letter below: pic.twitter.com/GjJ7WC4PV4

Watson said he had also written to federal Immigration Minister Sean Fraser offering Ottawa as a place for Ukrainians fleeing their homeland.

“We welcome those individuals and families who wish to come to our country and join the 1.4 million Ukrainians already calling Canada home,” he wrote.

He also pointed out Ottawa has previously been a place for other refugees from Vietnam, Somalia, Syria and Kosovo to settle.

Nazar Zhyhalskyi, who came to Canada from Ukraine about seven months ago, says he worries for the safety of his family members, who remain in Ukraine, since Russian forces invaded the country. 6:12

Beyond the street signs, NDP MP Charlie Angus has proposed renaming Charlotte Street to Zelensky Boulevard in a show of solidarity with Ukraine and President Volodymyr Zelensky.

“It’s just a symbol, maybe, but what we’ve learned from the fight in Ukraine is that symbols really matter,” Angus said.

“The symbol of President Zelensky, the symbol of Ukrainian people standing up to defend their democracy in the face of horrific levels of violence.

The MP said other countries might pay attention to the gesture if the Canadian capital renames the street.

“When you rename something in recognition of a worldwide struggle, you are giving a stronger sense of legitimacy.”

NDP MP Charlie Angus has proposed renaming Charlotte Street, the site of the Russian Embassy in Ottawa, to Zelensky Boulevard to signal support for Ukraine and President Volodymyr Zelensky. 1:04

Organizations around the world have already started collecting monetary and other donations for Ukraine. Volunteers at the Assumption of the Blessed Virgin Ukrainian Orthodox Cathedral in Ottawa were already sorting through donated items Wednesday, days before its official collection was set to begin.

Olenka Reshitnyk-Bastian said the church had received donations ranging from toothpaste and gauze to hospital gowns and sheets.

Meanwhile, owner of local bakery Life of Pie has also come up with a unique way to honor his heritage — Ukrainian flag cookies.

He’s also matching any individual donations to the Red Cross made to his bakery.

“I think it’s absolutely horrific what’s going on,” he said.

Although he believes Ukrainians are a stubborn people who won’t give up without a fight, he’s still worried about what lies ahead.

She also had a message to her fellow Ukrainians back home.

“We will support you as much as you need, for how long you need. We will try to do what we can,” she said, as her voice broke. “We don’t want to have any more people dying. We just want peace and independence and freedom.”