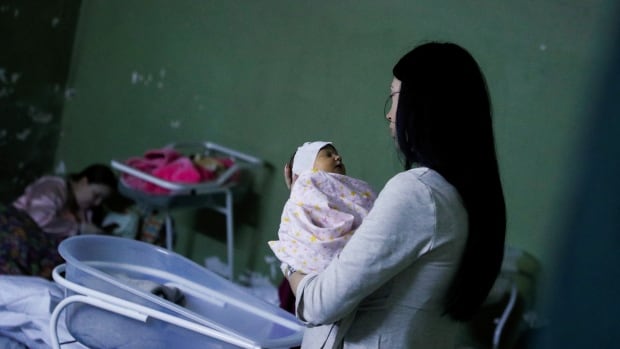 The week-long Russian invasion of Ukraine has sent more than 874,000 people fleeing to neighboring countries and forced families who remain in the country to protect their young in makeshift shelters.

Here’s a look at what they have had to endure amid the bullets, missiles and shelling since the war began on Feb. 24.

A couple with their newborn baby take shelter in the basement of a perinatal center as air raid siren sounds are heard in Kyiv, Ukraine, on Wednesday.

Other patients rest in the basement of the perinatal center.

Kateryna Suharokova kisses her newborn son, Makar, in the basement of a maternity hospital converted into a medical ward/bomb shelter in Mariupol, Ukraine, on Monday.

At a children’s hospital

Patients of Ohmatdyt Children’s Hospital in central Kyiv are taken to a bus headed to Poland on Wednesday.

A young patient rests on a couch in a basement being used as a bomb shelter at the children’s hospital on Monday.

Sergyi Badylevych, 41, kisses his child, as his wife, Natalia Badylevych, 42, right, looks on in an underground metro station used as a bomb shelter in Kyiv on Wednesday.

A pregnant woman and children sit on a bench in an improvised bomb shelter at a sports centre, which can accommodate up to 2,000 people in Mariupol, Ukraine, on Monday.

At Kyiv’s central train station on Wednesday, a family waits to board an evacuation train to Lviv, Ukraine.

The central train station in Kyiv was crowded on Tuesday as well, with people waiting to travel to Lviv.

People arrive at the central train station as they try to leave Kyiv on Tuesday.

Ukrainian people leave a train carrying 275 people that arrived in Zahony, Hungary, a border town with Ukraine on Feb. 25.

People get off a bus as they arrive at a refugee shelter in Tiszabecs, Hungary, on Wednesday.

A child sits on a bus at the border in Siret, Romania, on Monday, where thousands of refugees have entered from neighboring Ukraine to flee the conflict with Russia.

Refugees from Ukraine, including this child, wait on a bus after arriving at the border crossing Vysne Nemecke, Slovakia, on Tuesday.

A woman, left, holds a baby after crossing the border from Ukraine at the Romanian-Ukrainian border in Siret on Feb. 25.

A woman cries next to her children after fleeing from Ukraine, at the border crossing in Siret on Feb. 28.

A child from Ukraine comforts his sibling while they rest at the railway station in Przemysl, Poland, on Tuesday.

A Polish border police officer holds a child near the border crossing with Ukraine in Medyka, Poland, on Tuesday.

People rest at the Ursynow sports and recreation center in Warsaw on Wednesday.

A boy who fled Russia’s invasion of Ukraine plays with a baby at a local resident’s home in Tiszabecs, Hungary, on Wednesday.

Refugee children hold toys given to them after arriving at the Medyka border crossing in Poland on Monday. The UN has estimated the conflict could produce as many as four million refugees.

A child from Ukraine sleeps in a tent at a humanitarian center for refugees at the Moldovan-Ukrainian border in Palalanca, Moldova, on Feb. 25.

Children play at a temporary refugee shelter in Zahony, Hungary, near the Ukrainian border, on Feb. 25.