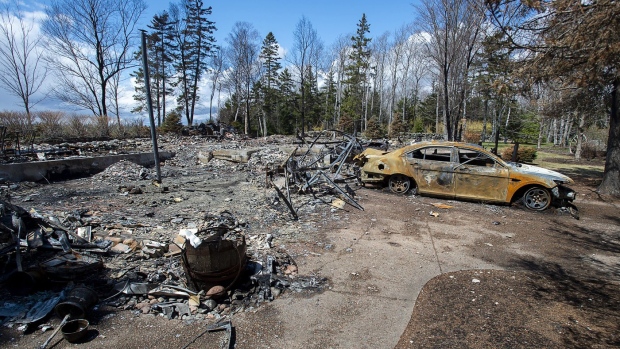 HALIFAX — A day after 22 people in rural Nova Scotia were shot dead by a man disguised as a Mountie, his common-law spouse described him as a controlling, abusive and manipulative man who had long warned he would be “going out with a anxious.”

The previously undisclosed comments from Lisa Banfield are contained in a transcript of a two-hour interview with an RCMP officer on April 20, 2020, released late Tuesday by an independent commission of inquiry investigating the mass shooting.

The results of the interrogation offer chilling new details about Banfield’s 19-year relationship with the killer and his deeply troubled personality and upbringing. It’s also the first time the public has been allowed to assess Banfield’s story in her own words.

During the interview, Banfield made it clear Gabriel Wortman was a “loving, kind and generous” man when they first met. But his volatile, unpredictable moods led to beatings and verbal abuse soon after they started living part time in an upscale “cottage” he had built in Portapique, NS, in 2003.

“In the past, he was abusive and I would appease him and say whatever I could to make it stop,” she told RCMP Staff Sgt. Greg Vardy during an interview at the Colchester East Hants Health Center in Truro, NS

“I never ever said anything (about the abuse) because I just didn’t want to get him in trouble. And in hindsight, I wish I would’ve, because maybe this wouldn’t have happened.”

At the time of the interview, Banfield was being treated for injuries she suffered on April 18, 2020, when Wortman attacked her at the cottage after they quarrelled about plans for their 20th anniversary as a couple.

The beating, which has been previously described in search warrant documents released by the RCMP, immediately preceded Wortman’s 13-hour killing rampage. The next morning, on April 19, 2020, he was fatally shot by a Mountie who spotted him at a gas station north of Halifax.

During the hospital interview a day later, Banfield — then 51 — described other “sporadic” beatings at the cottage, saying her spouse’s explosive rage was typically triggered by small disputes.

“When little things happened, he would lose his mind,” she said.

Aside from the most recent attack, Banfield said the last time she experienced intimate partner violence was three year earlier.

Among other things, the public inquiry’s mandate includes investigating the role of gender-based violence.

Banfield also spoke at length about Wortman’s childhood, which she said was marked by his bizarre relationship with his father, whom he grew to hate.

He was only three years old when his father first threatened him with a gun, she said. And when he was 10, she said his dad put a gun in his son’s hand and said, “I know you want to kill me, (so) kill me.” Her longtime partner also complained about being beaten, she said.

Years later, when there was a family dispute over financing for the cottage, Wortman set in motion a plan to kill his parents, she said. His scheme included a request to Banfield to help him shave off all his hair to prevent contaminating the crime scene with his DNA.

It’s unclear from the interview what actually happened, but Banfield confirmed police were involved, though there were no consequences.

Banfield said her spouse had learned to live with turmoil, which helped explain his unease with otherwise stable, healthy relationships.

At one point, Banfield told him, “When everything’s good, you always got to put a bump in the road because you don’t know how to deal with normal,” she said during the police interrogation. “But he knew how to deal with chaos.”

As a loner who had a hard time trusting people, Wortman developed fantasies about committing crimes and outwitting police, she added.

“He used to always say, ‘When I go out, I’m going out with a bang. It’ll be in the news,’” she told Vardy. “I would just dismiss it …. I knew he had crazy in him but I never thought it would get to that point.”

And she marveled at how an otherwise healthy, independently wealthy man could appear so lost, alone and angry.

“He had all the toys he wanted,” she said, referring to his collection of motorcycles and his obsession with online shopping. “It still wasn’t enough … He was always trying to find the next thing to … fill the void in his life.”

Even though her life was “somewhat of a nightmare,” Banfield said she could still see the good in the 51-year-old denturist. She mentioned how he would go out of his way to help his neighbors in Portapique, sometimes fixing their dentures at no cost.

“I just feel bad for him and I feel bad for all the people that died,” she told the officer as she explained how she managed to escape from him just before he started shooting people in Portapique. “But I don’t know what I could’ve done. If I would’ve stayed, maybe he wouldn’t have shot all those people.”

In total, Banfield spoke to police four times, including immediately after she emerged from hiding all night in the woods.

The federal-provincial inquiry, which started hearings last week, has been tasked with determining the circumstances of the shootings and delivering a final report in November that will include recommendations on how to improve public safety.

On Wednesday, lawyers representing some of the victims’ relatives argued that Banfield must face questioning during the inquiry’s hearings, something that had yet to be confirmed by three commissioners overseeing the proceedings in Halifax.

Lawyer Sandra McCulloch said Banfield should be compelled to testify because there are gaps in her statements to police, which raise questions about her credibility.

McCulloch said the inquiry must learn more about what happened in the hours before the couple’s argument and Banfield’s subsequent nighttime escape into a wooded lot near the cottage.

One of Banfield’s lawyers, Craig Zeeh, said her police statements should be enough to inform the inquiry.

This report by The Canadian Press was first published March 3, 2022.