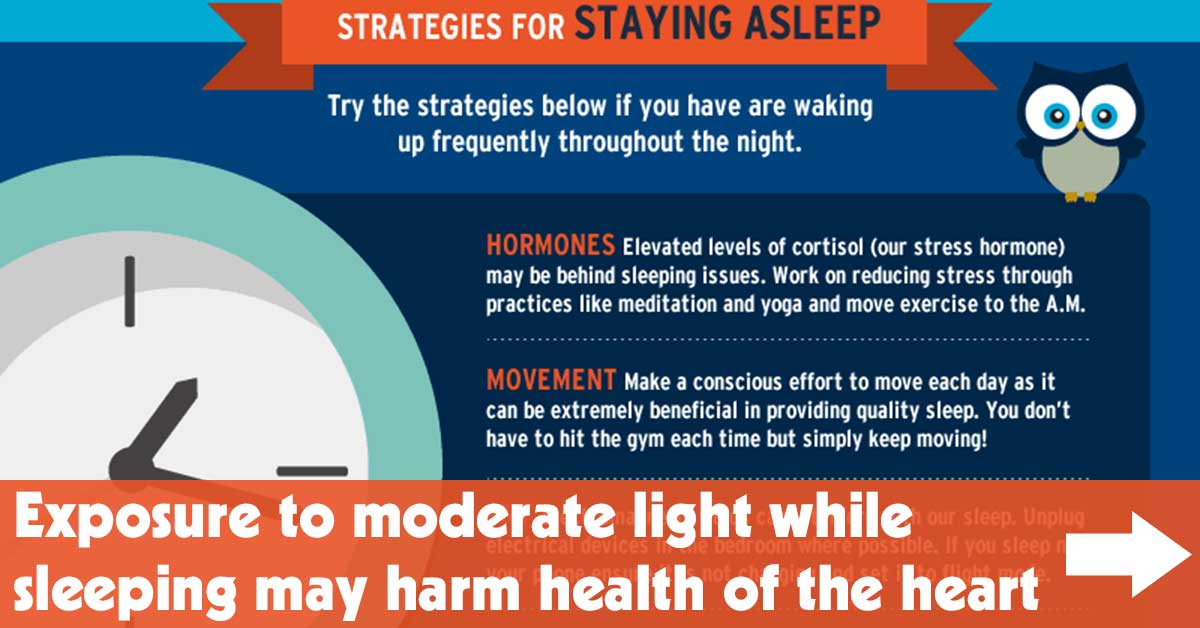 According to a study, even moderate ambient lighting exposure while sleeping at night, in comparison to sleeping in a dimly lit room, causes harm to cardiovascular function and increases insulin resistance the following morning.

These study results show that just one night of moderate lighting exposure in a room while sleeping can impair cardiovascular and glucose regulation, which are risk factors for diabetes, heart disease, and metabolic syndrome. Individuals need to avoid or reduce the amount of light exposure while sleeping.

There’s already evidence that daytime light exposure increases heart rate by way of sympathetic nervous system activation, which kicks the heart into high gear and enhances alertness to meet the day’s challenges. This study suggests that a similar effect is also present when light exposure happens while sleeping at night.

The researchers demonstrated that there was an increase in heart rate when study participants slept in a moderately lit room. Although asleep, the autonomic nervous system is activated, which is bad. The heart rate as well as other cardiovascular parameters are usually higher in the daytime and lower at night.

There are parasympathetic and sympathetic nervous systems for regulating our physiology throughout the day and night. Sympathetic regulates in the daytime and parasympathetic is supposed to regulate during the night, when it provides restoration to the entire body.

The researchers discovered that the participants experienced insulin resistance the morning after sleeping in a room that was moderately lit. Insulin resistance is when the muscle, liver, and fat cells don’t respond well to insulin and can’t make use of glucose from the blood for energy. To compensate for it, the pancreas manufactures more insulin, and blood sugar goes up with time.

Prior research examined a large group of healthy individuals who were exposed to light while sleeping and they were found to be more obese and overweight. This study shows that light exposure is impacting the ability to regulate glucose which suggests a mechanism that explains the weight gain.

Although the study participants weren’t aware of their bodies’ biological changes at night, their brains sensed it. It behaves similar to the brain of a person who has light and fragmented sleep. The sleep physiology isn’t resting the way it’s meant to.

Artificial light exposure at night either from indoor light-emitting devices or from outside sources while sleeping is common, especially in large urban areas. A significant percentage of people sleep with a light on in the bedroom and/or keep the TV on.

As well as sleep, exercise and nutrition, daytime light exposure is an important health factor, but the researchers show that even modest light intensity at night time can impair endocrine and heart health measures.

The researchers tested the effect of sleeping with a moderate light of 100 lux in comparison to a dim light of 3 lux in individuals over a single night. They found that the body went into a higher state of alert when exposed to moderate light. The heart rate increases in this state and also the force of heart contractions increase and the rate of how quickly the blood is transported to the blood vessels for oxygenation.

These results are especially important for individuals living in modern environments where indoor and outdoor nighttime light exposure is increasingly prevalent.

Want to use our images on your site? Right click on image for embed code