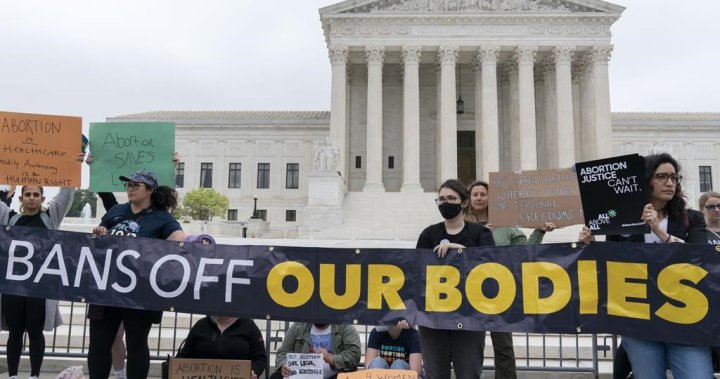 The leaked U.S. Supreme Court draft ruling suggesting that Roe v. Wade can be reversed puts a renewed focus on the state of abortion access across the country — and how it could change if the ruling becomes final.

While some states have legally protected access to abortion, many others have already put in place some sort of restriction, and some are pushing to restrict the procedure even further.

Roe v. Wade draft ruling puts US abortion rights in the crosshairs. Here’s what you need to know

The Roe v. Wade ruling in 1973 allowed states to regulate, but not prohibit, abortions up to the point of fetal viability, which is around the 24th week of pregnancy. Justices upheld the decision in 1992.

If Roe v. Wade falls, more than a dozen states will completely ban abortion immediately after the court’s decision is released. That number could increase if new so-called “trigger ban” laws are passed in the coming weeks.

Here’s a look at where abortion is allowed and restricted, and which states can ban it altogether.

Nearly every US state has some sort of abortion law that restricts access to abortion or protects a woman’s right to choose the procedure.

Yet these laws are far from equal in severity or scope. Some states with restrictions still allow abortions in the first or second trimester of a woman’s pregnancy, while others, such as Texas, have made it nearly impossible to have an abortion after six weeks — often before many women know that. they are pregnant.

The Texas law is the only one currently in effect because of its unique civil enforcement clause, which was ratified by the Supreme Court early this year.

Still other states are in an even more precarious position. Michigan, for example, has a law dating back to 1931 that prohibits abortion entirely, but the law has not been enforced in the 50 years since Roe v. Wade constitutionally protected abortion.

0:50
Biden Says Roe v. Wade Draft Leak Is ‘A Fundamental Shift in US Law’ If True

Biden Says Roe v. Wade Draft Leak Is ‘A Fundamental Shift in US Law’ If True

If Roe fell, the ban would likely go back into effect, which is what the Democratic state government of Gretchen Whitmer is currently trying to avoid.

The prospect of the Supreme Court overturning Roe has sparked a series of new abortion restrictions introduced by lawmakers since last year, some of which were recently passed.

Thirteen states have so-called trigger laws, which would ban abortion immediately if Roe is overturned and would presumably come into effect if the Supreme Court majority votes in favor of the draft in late June or early July.

Some laws, such as those in Idaho, explicitly state that the total ban would take effect 30 days after the Supreme Court decision.

Lawmakers in five other states — Iowa, Indiana, South Carolina, Ohio and Nebraska — have introduced legislation that would issue a trigger ban if passed. Most of those states, meanwhile, are also pushing to restrict access to abortion, or have already done so.

Nebraska’s proposed law was rejected last month due to tight conservative control of the state legislature, where some Republicans crossed party lines to vote to keep abortion legal.

Still, Republicans running for state office vowed to keep the fight alive in November’s midterm elections, and lawmakers who voted against the trigger ban have been condemned.

Sixteen states have passed some form of legislation that makes abortion a protected right under state law.

At least seven of those laws have only been passed in the past two years, as the prospect of Roe being destroyed grew ever greater. Protection laws in Washington and Maryland, for example, don’t go into effect until July.

Despite passing protections, some states are trying to go even further to ensure access to abortion is widely enforced.

1:13
Overthrowing Roe v. Wade would be ‘ultimate invasion of a woman’s right to privacy’: Senator Smith

Overthrowing Roe v. Wade would be ‘ultimate invasion of a woman’s right to privacy’: Senator Smith

Unlike other states that have protected abortion through legislation, Alaska’s highest court recognized a fundamental right to “reproductive choice” under the Constitution in 1997, effectively blocking any attempt to restrict access. A requirement for parental consent is not maintained.

Amid the looming prospect of Roe being destroyed, eight states have passed legislation to protect the right to abortion, including states without explicit laws like Pennsylvania and New Hampshire.

While those laws have a chance to pass, others — such as laws enacted in conservative states like Florida, Missouri, and Kentucky — are less likely to become law.