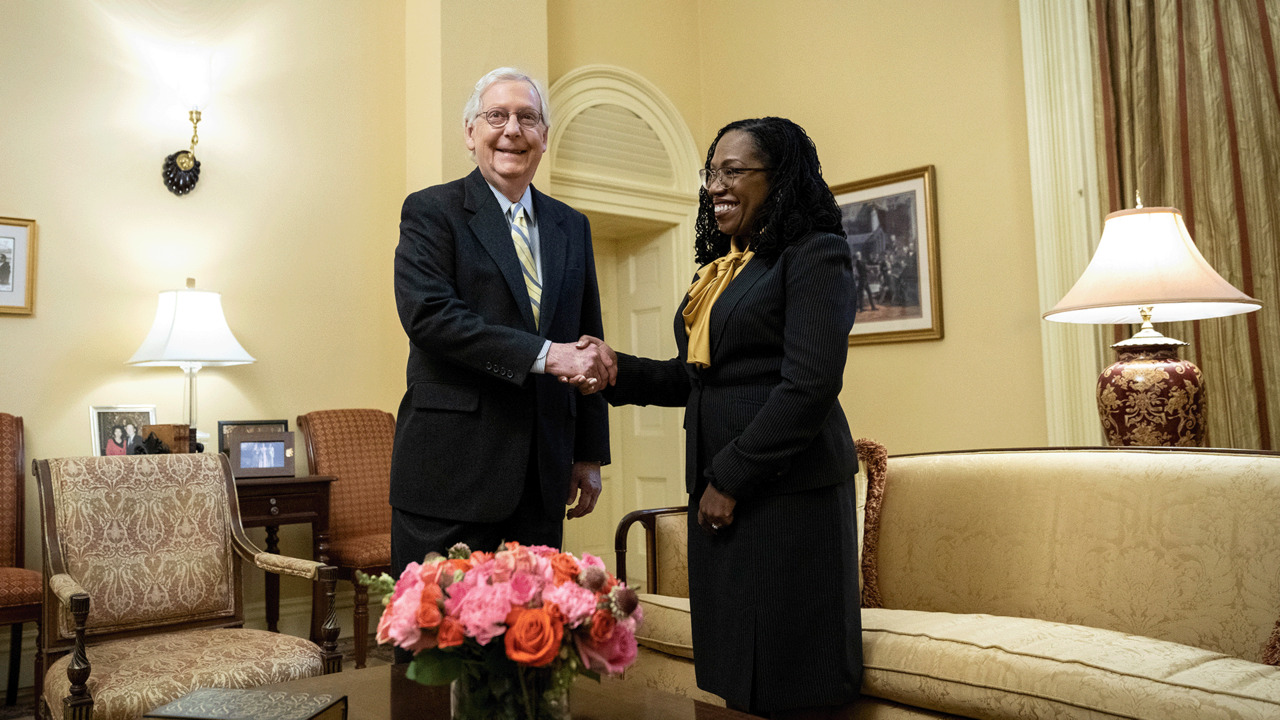 The CBC set up a “war room” to defend Jackson even before she was selected, according to Rep. Steven Horsford (D-Nev.).

“We’re ready to support her fair hearing, and expect a quick confirmation process from the Senate,” he said. “And we’ll do everything to make sure that she is confirmed, and that we push back on any attempts to weaken her in the process.”

The Senate Judiciary Committee is set to begin Jackson’s four-day confirmation hearings on March 21, and the panel will meet March 23 behind closed doors to discuss Jackson’s FBI background check. The final day, March 24, will include testimony from outside witnesses. Jackson, who currently serves as a judge on the DC Circuit Court of Appeals, already returned the extensive committee questionnaire this week.

Senate Judiciary Chair Dick Durbin (D-Ill.), who met with Jackson on Wednesday, said he’s talking to “about a handful” of Senate Republicans to ask them to consider supporting her. He also defended Democrats’ speedy timeline for confirming her, noting that her hearing will take place 24 days after Biden announced her pick, compared to the 16 days Republicans used in 2020 to get Justice Amy Comey Barrett in front of the committee.

“It’s a contemporary standard and it’s an analogous standard, a recent appointment to the circuit court moving to the Supreme Court,” Durbin said, noting Jackson appeared before the committee last year. “Many of the same players who were here for Justice Barrett’s nomination are still on the committee and so it’s tough for them to argue that we’re doing anything particularly different.”

Following his meeting with Jackson, Schumer praised her character and experience as a public defender and reiterated Democrats’ plan to confirm her before the Easter recession.

“She belongs on the court,” Schumer told reporters. “She reminds me in certain ways of Justice [Stephen] Breyer who she clerked for, that she is so thoughtful and even-handed and tries to look at both sides.” He added that the Democrats “want to do this fairly but expeditiously.”

In an interview on the Guy Benson Show, McConnell said there is “no question” that Jackson is qualified to be on the Supreme Court and described her as “intelligent and very likely progressive.”

He also recalled asking Jackson on Wednesday a question about adding seats to the high court, noting that Justices Stephen Breyer and Ruth Bader Ginsburg opposed the idea. “I didn’t get an answer to that but I’m sure she’ll be asked that again in her hearings before the Judiciary Committee,” McConnell said.

Senate Democrats can confirm Jackson with their 50-member caucus, but the White House and Democratic leaders are hoping for a bipartisan vote. Three Republican senators — Lisa Murkowski of Alaska, Susan Collins of Maine and Lindsey Graham of South Carolina — voted to confirm Jackson to the DC Circuit last year. Graham, however, pushed for Biden to nominate South Carolina district court Judge J. Michelle Childs to replace Breyer and has described Jackson as a pick for the “radical left.”

Jones predicted it would be “a very good process” and that “it’s going to be very respectful regardless of what may have happened in the past,” a reference to the partisan controversy surrounding the last three nominees to the Supreme Court.

Senators on both sides of the aisle aren’t expecting a contentious process, given Jackson’s confirmation wouldn’t shift the balance of the court.

Still, Democrats are counting on the nomination to energize voters, given Biden is fulfilling his campaign pledge to place a Black woman on the Supreme Court as his domestic agenda remains stalled.

Rep. Mondaire Jones (DN.Y.) predicted Wednesday that Jackson’s nomination “will help the president in terms of his approval within the Black community,” noting there are “a lot of members of the community who are frustrated by the fact that we didn’ t get to pass” police reform or a $15 minimum wage.

Nicholas Wu contributed to this report.