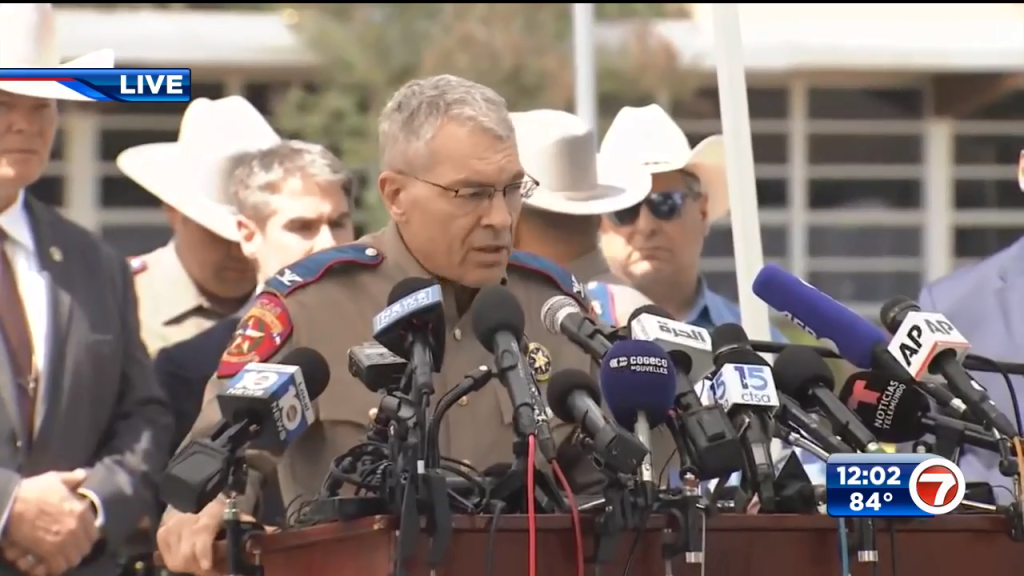 UVALDE, Texas (AP) — Nearly 20 officers were in a hallway outside the classrooms of a Texas elementary school for more than 45 minutes before officers used a master key to open a door and confront a gunman, authorities said Friday.

The site commander believed the gunman had been barricaded in a classroom at Robb Elementary School in Uvalde during Tuesday’s attack and that the children were not at risk, Texas Department of Public Safety director Steven McCraw said at a news conference.

“Of course it was not the right decision. It was the wrong decision,” McCraw said.

Children repeatedly called 911 for help, including one begging, “Please send the police now.”

THIS IS A BREAKING NEWS UPDATE. Following is AP’s earlier story.

UVALDE, Texas (AP) — The gunman who butchered 19 children and two teachers at a Texas elementary school was in the building for more than an hour before being killed by law enforcement officers, authorities say.

It was 11:28 a.m. Tuesday when Salvador Ramos’ Ford pickup slammed into a ditch behind the low-slung Texas school and the driver jumped out with an AR-15-style rifle.

But it wasn’t until 12:58 pm that police radio chatter said that Ramos had been murdered and that the siege was over.

On Friday, security officials have scheduled another briefing to clarify the timeline and address the anger at the response. But that came only after he refused to explain why officers hadn’t been able to stop the gunman sooner, while Victor Escalon, regional director of the Texas Department of Public Safety, told reporters on Thursday that he had “considered all those questions,” but was not ready to answer them.

But the first police officers did not arrive until 12 minutes after the accident and did not enter the school until four minutes later to chase the gunman. Inside, they were driven back by gunfire from Ramos and took cover, Escalon said.

“The information we have a few weeks after an event is usually very different from what we get the first day or two. And even that is usually quite inaccurate,” Dorn said. For catastrophic events, “usually it takes you eight to 12 months to really get a decent picture.”