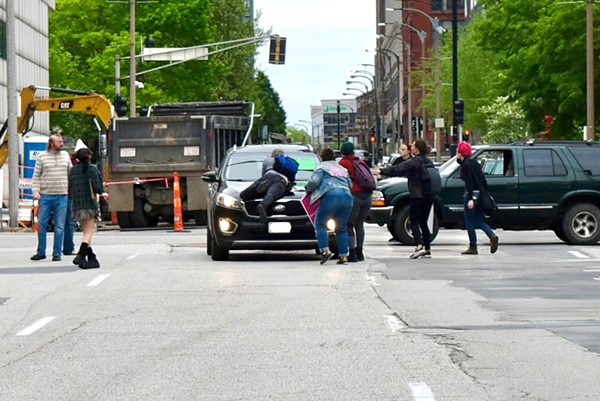 We hid the license plate of this vehicle. No other changes have been made to this photo.

Activists gathered in downtown on Tuesday afternoon to protest the possible overthrow of Roe v. Wade† Eyewitnesses report that a protester was hit by a car.

The RFT had a photographer, Reuben Hemmer, join the protest. This is what he said:

“Actually I heard what sounded like a big ‘clap’ and I looked back and saw this driver continue to drive forward with this person on their car. He didn’t jump on the car. Immediately behind the driver was a police car and as soon as the police turned on their lights, the driver stopped. People rushed by car and the police intervened. Initially, they put the driver in the back of their police car, but then allowed the driver to get back into his car to move it. He stayed in his car for quite some time and I’m not sure what happened after that. I assume he’s been arrested, but I’m not sure. The police then offered to use their car to close off the street so that something like this wouldn’t happen again.”

We’ve attached more photos of the incident below.

The police approach the vehicle.

Activists gather around the car.

The crowd gathers around the police car.

Protesters watch on the scene.