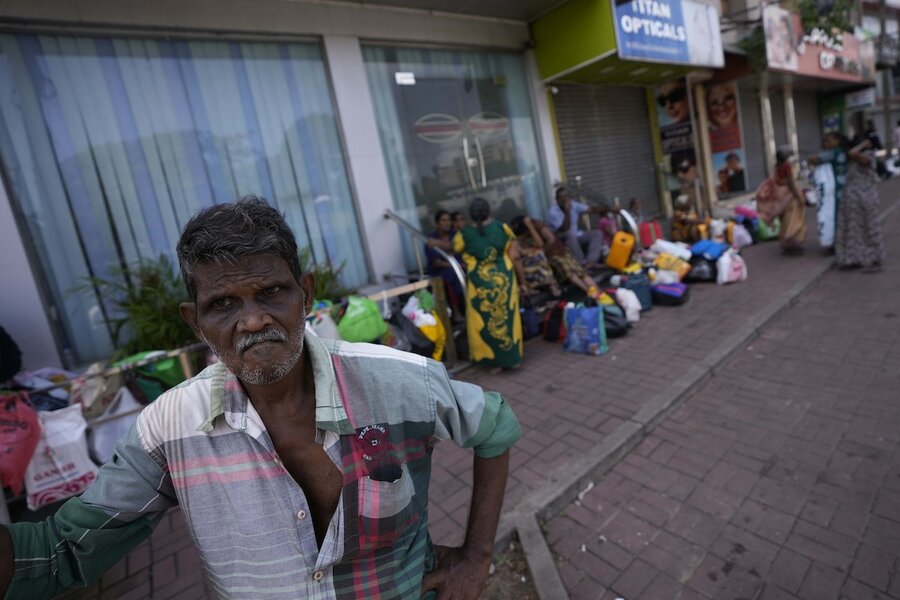 Sri Lanka’s Prime Minister said on Tuesday that the United Nations has launched a global public appeal to help the island’s food, agriculture and health sectors face severe shortages during the worst economic crises in recent history, but the expected funds are barely forthcoming. on the surface of the The country needs six billion dollars to survive the next six months.

Speaking to parliament, Prime Minister Ranil Wickremesinghe said the UN plans to provide $48 million in aid over a four-month period.

Mr Wickremesinghe said it will be difficult to get some essentials for the next three weeks and urged people to be united and patient, use scarce supplies as carefully as possible and avoid non-essential travel.

“That is why I urge all citizens not to think about hoarding fuel and gas during this period. After those difficult three weeks we will try to deliver fuel and food without further interruptions. Negotiations are underway with several parties to ensure this happens,” said Mr Wickremesinghe.

Lines to buy fuel and cooking gas have stretched for miles each day, winding around blocks, with Sri Lankans enduring heavy rains and scorching heat to buy essential items that cost three times as much as they used to. Often they have to wait for days, and many are left empty-handed anyway.

Jagath Chandana has been queuing for two days on the outskirts of the capital Colombo with a jerry can to buy cooking gas. “It’s been crazy. We are totally helpless. It seems that even Ranil cannot solve the crisis. She [politicians] just talk, but on the ground floor people suffer,” he said.

Sri Lanka is nearly bankrupt and has suspended repayment of its foreign loans. Foreign reserves are nearly exhausted, limiting imports and creating a serious shortage of essentials, including food, medicine, fuel and cooking gas.

The island nation must repay $7 billion this year of the $25 billion in foreign loans it must pay by 2026. Sri Lanka’s total external debt is $51 billion.

The authorities have started talks with the International Monetary Fund for a rescue package and Mr Wickremesinghe has asked the IMF to lead a conference to unite Sri Lanka’s lenders.

A decision taken last year to ban agrochemicals and make the country’s agriculture fully organic has cut rice production in half during the main growing season, though the ban has since been lifted. A lack of money to buy fertilizer also threatens future yields and creates fears of a food crisis.

“The task of rebuilding our declining agriculture must begin immediately. We are losing the international market for our export crops. Action must be taken to prevent this. Chemical fertilizers are needed to boost local agriculture,” he said.

Wickremesinghe took over after days of violent protests last month forced his predecessor, President Gotabaya Rajapaksa’s brother, Mahinda, to resign and seek safety from angry crowds at a naval base.

But time may not be on its side as reforms are slow and people now want results. He is also a one-man in parliament – ​​the only legislator from his party to retain a seat after suffering a humiliating defeat in the 2020 election.

“Someone who has no political base has to manage an unprecedented crisis,” said Dayan Jayatilleka, a former diplomat and political analyst.

“Japan is our old friend. A nation that has helped our country immensely. But they are unhappy with us now because of the unfortunate events of the past,” said Mr. Wickremesinghe. “Our country had not formally notified Japan of the suspension of certain projects. Sometimes the reasons for these suspensions were not even stated.”

Sri Lanka canceled and reinstated a port development project with India and Japan several times in the years following their first agreement of 2019.

“Despite alienating these friendly nations, India offered to help us in the face of the growing crisis. We extend our respect and gratitude to them at this difficult time. We are also working to restore old friendships with Japan.”

India has provided billions of dollars in aid to Sri Lanka through loans and credit lines since the start of the crisis.

Overseas labor remittances have been one of Sri Lanka’s main economic lifelines, along with clothing exports and tourism, but that income has fallen dramatically as authorities artificially detained the value of the US dollar and mandated the conversion of foreign currency into local currency. made, leaving many illegal channels to transfer money.

Mr Nanayakkara said Sri Lanka typically received $700 million a month in remittances from foreign workers, but that figure fell to $230 million in March.

The economic crisis has led to political unrest in the country. Protesters have camped outside the president’s office for more than 50 days, calling for the resignation of President Rajapaksa, whom they accuse of being responsible for the crisis.

While there are still signs of financial hardship and strife in Sri Lanka, there is growing hope among some that Mr. Wickremesinghe will help them through the hard times.

“He can’t work miracles, it will take time to resolve the crisis because previous ministers screwed up,” said Amila Prasanna, a carpenter. “He’s trying to solve the problems one by one, and I’m sure he will do something,” he said as he waited in a long line to buy petrol.