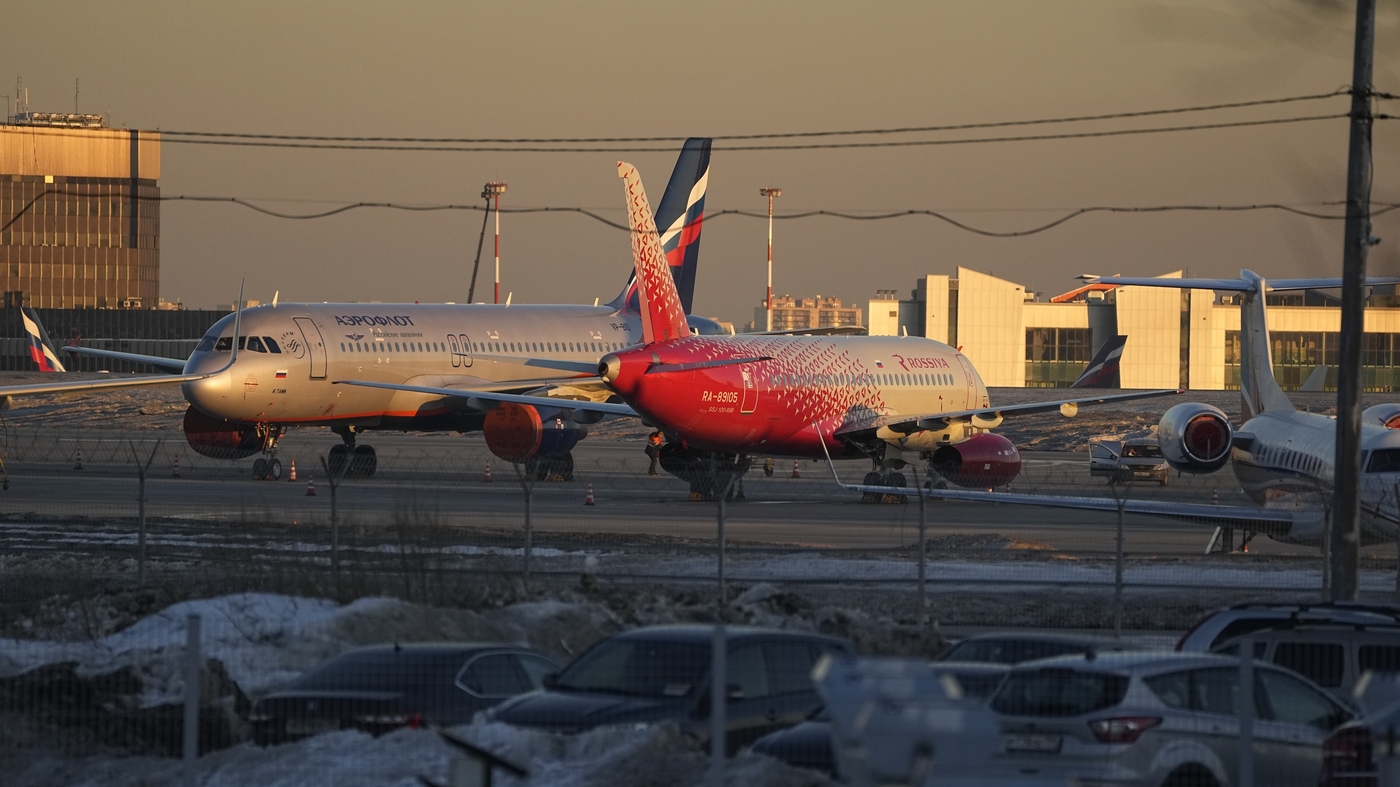 Aeroflot passenger planes are seen parked at Sheremetyevo Airport, outside Moscow, on Tuesday. Russia’s largest airline, Aeroflot, said Monday that it suspended flights to New York, Washington, Miami and Los Angeles because Canada had closed its airspace to Russian planes.

Aeroflot passenger planes are seen parked at Sheremetyevo Airport, outside Moscow, on Tuesday. Russia’s largest airline, Aeroflot, said Monday that it suspended flights to New York, Washington, Miami and Los Angeles because Canada had closed its airspace to Russian planes.

As of 9 pm Eastern Time Wednesday, Russian aircraft are prohibited from entering US airspace.

President Biden announced he was ordering that in his State of the Union address Tuesday night, joining the European Union and Canada in banning Russian planes, part of a worldwide effort to punish Russia for its invasion of Ukraine.

The Putin regime is expected to reciprocate and prohibit US aircraft from entering Russian airspace. That could mean longer flights as jets are rerouted around closed airspace, but aviation industry experts say Russians will likely feel the greater impact.

According to a statement from the US Department of Transportation, the order prohibits all passenger, cargo and charter flights on “all aircraft owned, certified, operated, registered, chartered, leased, or controlled by, for, or for the benefit of, a person who is a citizen of Russia.”

Any aircraft operators who violate the ban on entering US airspace “may be intercepted, and their pilots and other crewmembers detained and interviewed by law enforcement or security personnel, as appropriate.”

The airline that will see the most immediate impact is Russia’s Aeroflot, which had been flying into Miami, Los Angeles, New York, and Washington, DC, and had been flying over US and Canadian airspace to destinations in the Caribbean. Those flights to and from the US are now banned and Aeroflot will have to reroute flights to get to popular vacation destinations.

“So places like Punta Cana in the Dominican Republic, Cancun in Mexico, those destinations are not off limits,” says Ian Petchenik of the global flight tracking service FlightRadar24. “But the route to get there has become significantly longer for Russian airlines,” as they will have to fly through international airspace over the Atlantic.

An Aeroflot flight from Miami to Moscow on Sunday violated Canada’s ban on Russian overflights. Canadian air traffic control authorities told Reuters that Aeroflot had declared the flight as a “humanitarian” mission.

The country’s aviation authority, Transport Canada, said on Twitter that it is investigating the airspace violation. “We will not hesitate to take appropriate enforcement action and other measures to prevent future violations,” the agency said.

In addition, Petchenik says vacation destinations in the Caribbean will be harder to get to.

Russia is expected to return the favor and close off its airspace to US airlines, as it has with those from Canada and the EU, but Petchenik says the impact will be relatively small.

“It’s very few passenger flights. And the cargo flights that are affected are spending a little more time in the air, but most of these flights are still able to operate,” he said.

No US airlines currently fly into any Russian cities, and those that flew over Russia’s vast airspace to Asia had already been rerouting out of an abundance of caution. That adds time and burns a lot more fuel, increasing costs. So United Airlines has temporarily suspended flights over Russia to New Delhi and Mumbai, India.

And about 300 cargo flights a month are affected, most going from the West Coast or Anchorage, Alaska, to destinations in Japan, South Korea, China, and to Hong Kong, but Petchenik says they can divert their flight paths away from Russian airspace.

Airline industry sources say had this happened before the pandemic, the impact would have been much greater. US airlines few 1,400 flights a week through Russian airspace in 2019, but the pandemic sharply reduced international air travel.

European airlines are more greatly affected, as many are no longer flying to the Russian cities they served nor can they take shorter routes through Russian airspace to and from many Asian destinations.

Petchenik says Lufthansa’s flight from Frankfurt to Tokyo, for example, which used to loop high over Russia’s polar region, now has take a much longer path through south Asia. So a flight that used to take under 10 hours now takes nearly 13 hours.

So while experts say the airspace ban is largely symbolic, economic sanctions will likely cripple the ability of Russian airlines to operate their fleets, as it is becoming nearly impossible for them to get parts and make needed repairs to keep their planes flying

Aircraft manufacturers Boeing and Airbus, and GE, which makes and services airplane engines, both announced they are suspending parts, maintenance and technical support services for Russian airlines.

“The inability to access services and spare parts and all of the electronic support that come along with operating a modern airliner, all of those things are going to bring Russia’s commercial aviation industry to a halt very quickly,” Petchenik says.