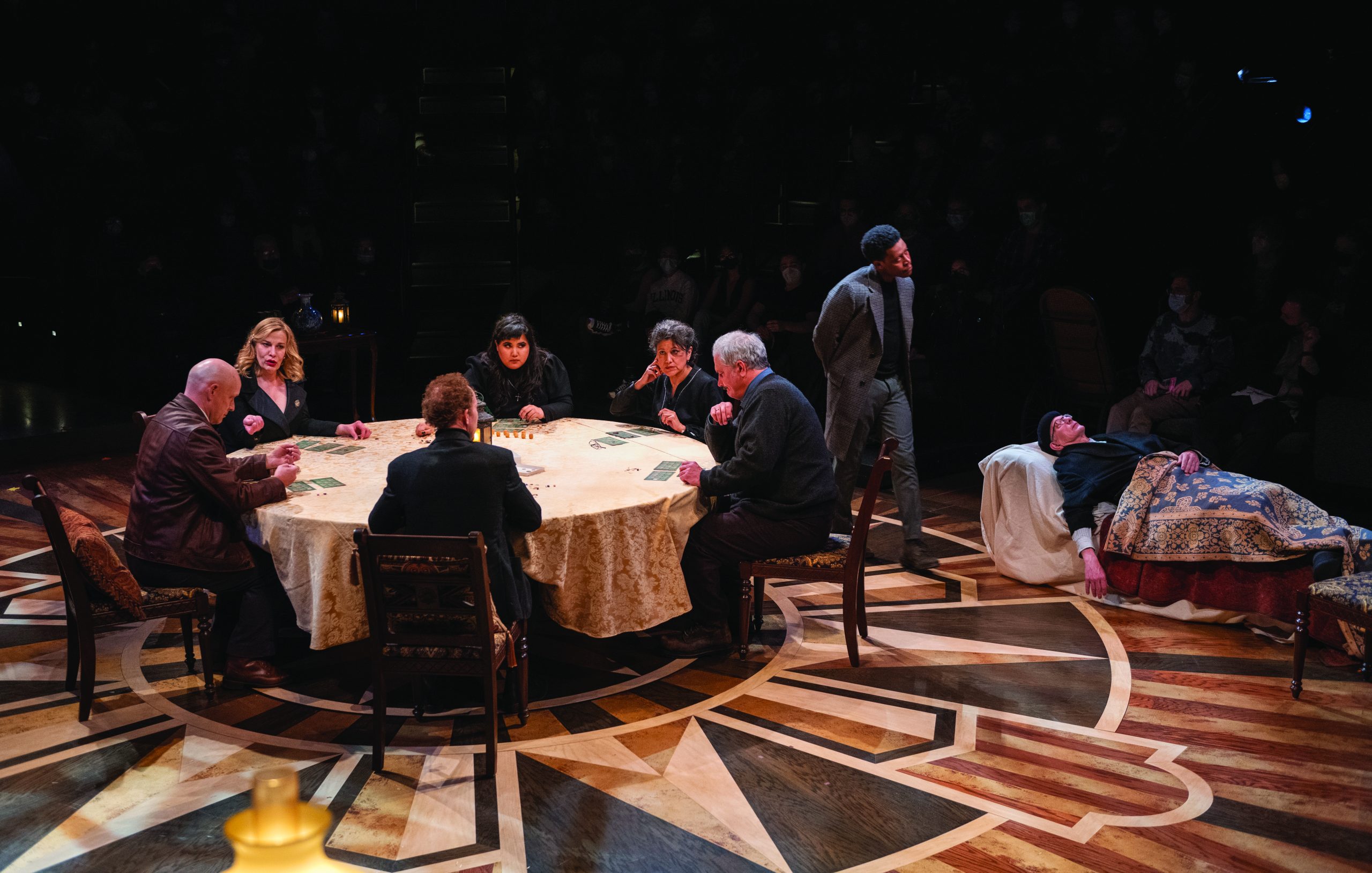 “Here is a theatre. No curtain, no wings, no landscape. Just an empty place.” Konstantin Treplev, the young and hungry artist manque in Anton Chekhov’s Seagull, speaks these words before the disastrous and failed premiere of his play for his family. But at the Saturday opening of ensemble member Yasen Peyankov’s production in Steppenwolf, it certainly felt like a clear-throat, point-to-the-room-around-you moment.

The room in question is Steppenwolf’s new Ensemble Theater (officially the Ensemble Theater in honor of Helen Zell, as multimillion-dollar complexes need generous donors), and it just happens to be in the rounds. So: No curtain. No wings. Obviously the benches on the podium for Treplev’s family are first lined up for a proscenium setup and then reconfigured for the round. But there is a setting in Treplev’s play, where his beloved Nina is first lifted from the wooden floor on a circular platform and then enveloped by a white cage-like structure that descends from the ceiling.

It’s a strange moment, and one that encompasses some of the incongruities in Peyankov’s staging. (He also translated and adapted the script; according to a program note by co-artistic directors Glenn Davis and Audrey Francis, he’s been working on it for 15 years.) Why would Treplev talk passionately about the importance of the empty stage, just to deploy mechanical constructions? ? Is it to show us that he lacks the power of his strongly formulated beliefs? Or is this staging choice to reassure the audience that semi-fancy stagecraft is still on tap in the new house? The former can be interesting to explore, but the latter gets in the way.

In reality, in this piece, there is often the feeling that Treplev (Namir Smallwood) is elaborating on the importance of new forms as a way of taking revenge on those he sees as artistic elect – namely his actress mother, Irina Arkadina (Lusia Strus ), and her lover, the popular writer Boris Trigorin (Joey Slotnick). Nina (Caroline Neff), on the other hand, sincerely idolizes both Arkadina and Trigorin. Not that it does her much good. Masha (Karen Rodriguez), the daughter of the caretaker of the estate where the action takes place, carries a torch for Treplev, while the dull schoolteacher Semyon Medvedenko (Jon Hudson Odom) walks miles towards Masha, despite her barely concealed disdain for it. Masha dresses all in black because she is ‘mourning my life’. (Aren’t we all?)

This is a play in which no one is completely satisfied, not even the seemingly smug Arkadina (until the brass hilt played by Strus, a welcome return to Chicago, where she cut her teeth with the Neo-Futurists and Peyankov’s European Repertory in the 1990s) . Peyankov’s editing feels contemporary and sharp, with sour lines landing when needed. Neff is a cooler and more stable version of Nina than the fluttering naives of other productions I’ve seen, where the impulse to play the title’s doomed seabird colors everything too quickly. We can almost believe that even with all her vulnerabilities, Neff’s Nina will somehow find a way to get by, even if it means selling her own values. Or maybe she was always more in love with the possibilities of fame that Arkadina and Trigorin’s careers offer than with Treplev’s reactive Angry Young Man demeanor.

Generational differences are present in the casting. Smallwood, Neff and Rodriguez are newer members of the ensemble, and it’s a pleasure to see them in the company of co-founder Jeff Perry (who plays Sorin, Arkadina’s abusive brother and owner of the estate) and longtime ensemble member Eric Simonson, who plays country doctor Dorn, the only one who really enjoys Treplev’s play. (Scott Jaeck will take over from Perry on May 24.)

But even with the intimacy afforded in the undeniably beautiful and comfortable new theater, there’s emotional distance in this show and a presentation quality for moments that should be as stripped-down and accessible as Peyankov’s lyrics. Part of that is the nature of the (feathered?) beast with this piece, which always sleeps uncomfortably between tragedy and comedy – a state of affairs implied by the poster, which features a cartoon bird with a toy gun to its head and a banner with the text “BANG!!!” splash out of the barrel. Everyone is a little out of step with the story, but that doesn’t mean the actors should feel like they’re in different plays, which happens here sometimes.

I think it goes back to the fact that we don’t have a clear idea of ​​Treplev, who is the catalyst for a lot of what does or doesn’t happen. He is loved by Masha (and at least for a while, by Nina). His tragedy may be that he cannot see the former at all and cannot see the latter for who she really is.

Smallwood’s Treplev nails the self-pity and welling anger within. But if we don’t get a sense of the life and pleasure he derives from trying to create even his clumsy attempts at “new forms,” ​​we’re left with a bit of a void, and Peyankov’s staging hasn’t given us that yet. He doesn’t seem completely confident that we can keep both sides of Treplev in mind. In this way, the rising platform and the falling cage in Treplev’s play might be appropriate metaphors after all. This is a Seagull strive for both sides: celebrating Steppenwolf’s past and pointing to his future, yet feeling a little trapped between the two.