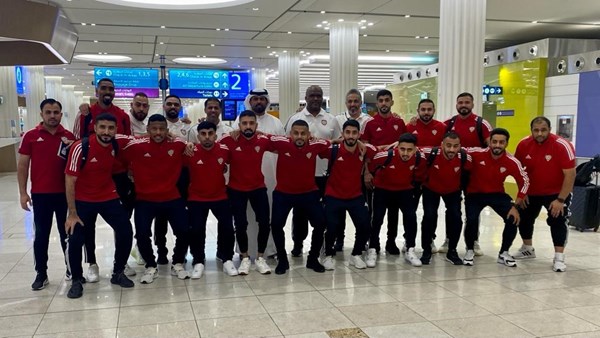 The delegation of our national futsal team arrived this morning in the state of Kuwait in preparation to participate in the fourth West Asian futsal championship, scheduled for the period from June 4 to 13, with the participation of 8 teams.
The delegation of our national team, led by Abdul Malik Jani, Chairman of the Futsal Executive Committee, consisted of 14 players: Rashid Obaid Muhammad, Abdullah Rashid Al Falasi, Abdullah Juma Al Muhairi, Khaled Muhammad Al Muhairi, Hassan Ali Al Hantobi, Abdullah Muhammad Al Hosani, Omar Ali Al Naqbi, Khaled Abdullah Al Hammadi, Hamad Hassan Al Balushi, Abdullah Abdul Majeed Al Balushi, Taher Hassan Tarish, Ahmed Hussein bin Hammad, Muhammad Obaid Muhammad, Omar Abdul Sattar Al Fahim.
The day after tomorrow, our team will open its campaign in the tournament against Oman, and Lebanon will meet on June 7, while the third match against Bahrain will be on June 9 and the championship matches will be held at Al-Nasr Club Stadium in Kuwait.
Eight teams participate in the tournament, divided into two groups: the first group included the teams from Kuwait (host country), Palestine, Saudi Arabia and Iraq, while the second group included the teams from the Emirates, Oman, Lebanon and Bahrain.
The semifinal matches of the tournament will be held on June 11, where the first of the second group meets the second of the first group, and the first of the first group meets the second of the second group, so that the two winners qualify for the last game scheduled for June 13.