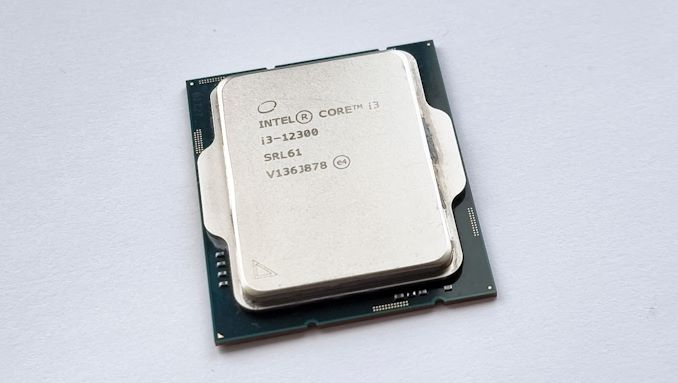 Just over a month ago Intel pulled the trigger on the rest of its 12th generation “Alder Lake” Core desktop processors, adding no fewer than 22 new chips. This significantly fleshed out the Alder Lake family, adding in the mid-range and low-end chips that weren’t part of Intel’s original, high-end focused launch. Combined with the launch of the rest of the 600 series chipsets, this finally opened the door to building cheaper and lower-powered Alder Lake systems.

Diving right in, today we’re taking a look at Intel’s Core i3-12300 processor, the most powerful of the new I3s. Like the entire Alder Lake i3 series, the i3-12300 features four P-cores, and is aimed to compete in the entry-level and budget desktop market. With prices being driven higher on many components and AMD’s high-value offerings dominating the lower end of the market, it’s time to see if Intel can compete in the budget desktop market and offer value in a segment that currently needs it.

Below is a list of our detailed Intel Alder Lake and Z690 coverage:

As a quick recap, we’ve covered Alder Lake’s dual architectural hybrid design in our Core i9-12900K review, including the differences between the P (performance) and E (efficiency cores). The P-cores are based on Intel’s high-performance Golden Cove architecture, providing traditional high single-threaded performance. Meanwhile the Gracemont-based E-cores, though lower performing on their own, are significantly smaller and draw much less power, allowing Intel to pack them in to benefit multi-threaded workloads.

Aside from the two top Core i5 models (i5-12600K and i5-12600KF), all of chips below that level, including the Core i3, Pentium, and Celeron series, only feature Intel’s Golden Cove P-cores. Intel’s 12th generation Core i3 processors feature four such P-cores, with 12 MB of L3 cache, and all but one (i3-12100F) uses Intel’s Xe-LP architecture-based UHD 730 integrated graphics.

At the time of writing, there are five Core i3 processors announced so far. While the interpretation of TDP can be taken in different ways depending on the company and how it is measured, Intel has gone one step further by offering both TDP at the base frequency and turbo frequencies. Three of these are standard non-K SKUs, while two of these feature the T naming moniker, which signifies that they have a base TDP of just 35W, perfect for lower-powered systems. 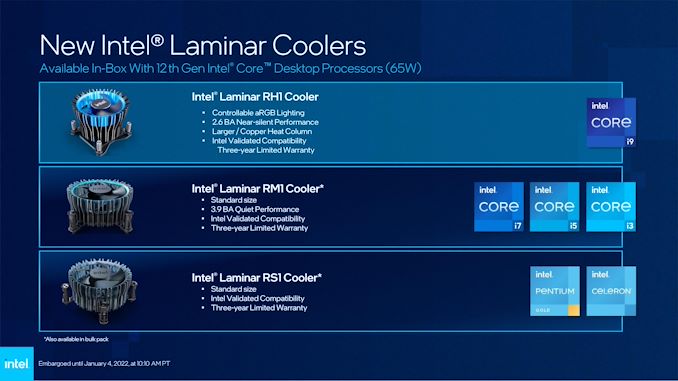 For this generation Intel has also refreshed its stock CPU coolers, which is the first time it has done this in quite a long time. Although none of the K-series processors include one, aftermarket cooling is necessary to utilize its Thermal Velocity Boost (TVB) and Intel’s new ‘infinite turbo.’ This means that the processor under heavier workloads will try and use turbo as much as possible, which can mean better cooling is needed on the parts with higher P and E-core counts. In the case of the Core i3 series, the maximum TDP figure Intel provides is 89 W, so any conventional CPU cooler should be able to sustain turbo clock speeds for a more extended period of time.

The Core i3 series is shipped and bundled with Intel’s new Laminar RM1 CPU cooler, which is similar in size to previous iterations of its stock cooler. Unlike the RH1, the RM1 doesn’t feature RGB LED lighting and uses a traditional push-pin arrangement to mount into the socket. Intel hasn’t stated which material it uses, eg, copper or aluminum, or a combination of the two, but regardless of the materials used, for sub 100 W workloads these coolers should be more than ample for the Core i3 series.

Users have lots of choices available in terms of LGA1700 motherboards, including Z690, B660, H670, and H610, as well as support for either DDR5 and DDR4 memory. Users can pair up the Core i3-12300 with the more expensive DDR5 and Z690 for the absolute greatest performance, but the target audience for the Core i3 is users on a budget. This means that users are more likely from a cost perspective to build a system with one of the more affordable B660, H670, and H610 chipsets and pair that with DDR4 memory.

In terms of the competition from AMD, the green team is effectively absent from the sub-$200 quad core market for the moment. AMD does have a more-or-less direct competitor to the Alder Lake i3s in the Ryzen 3 5300G. However, as that chip is OEM-only (and terribly expensive on the gray market), as far as the retail market and individual system builders are concerned, it’s all but unavailable. Which means that, at least amidst the ongoing chip crunch, Intel has the run of the market below $200. That said, we are including it in our graphs for completion’s sake, and to outline where AMD would be if they could provide their quad core chips in greater volumes.

The next best competitor for the i3-12300 then is arguably the Ryzen 5 5600X, which is an ambitious task and admittedly somewhat lopsided task. The AMD Ryzen 5 5600X is based on its Zen 3 architecture and has six cores versus the four of the i3-12300, while the 5600X also benefits from four more threads (12). Intel’s Alder Lake architecture also benefits from PCIe 5.0, but right now there aren’t any (consumer) devices that can utilize the extra bandwidth available. The AMD Ryzen 5000 series uses PCIe 4.0 on X570, with PCIe 4.0/3.0 on B550 and below. 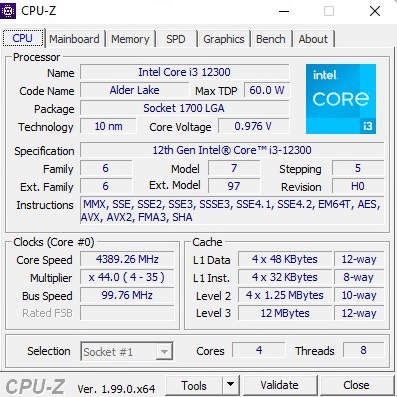 Aside from architectural, core count, and thread count differences between the Intel Core i3-12300 and the AMD Ryzen 5 5600X, the next biggest difference is the price. The Ryzen 7 5600X has an MSRP of $299, although it can be found at Amazon at the time of writing for a recently trimmed price of $229. The Intel Core i3-12300 is much cheaper in contrast, with a per 1k unit pricing of $143. With the first shipments just now hitting the market, we expect the retail MSRP to be around the $160-170 mark.

Other processors from AMD that could be considered competitors are the 5000 series Cezanne APUs. This includes the Ryzen 5 5600G, which is currently $219 at Amazon. Despite being more focused on entry-level gaming with integrated Vega 7 graphics, it consists of six cores with a base frequency at 3.9 GHz and a turbo frequency of 4.4 GHz; the 5600G also benefits from twelve threads.

Finally, boxing things in from the other direction, Intel also has the Core i5-12600K processor with six P-cores and four E-cores, with a price tag of $280 at Newegg. We will be reviewing the Core i5 a bit later this month, and it is currently on our testbed undergoing our CPU test suite at the time of writing.

Although there were some initial problems with the Intel Thread Director when using Windows 10 at the launch of Alder Lake, the P-core only Core i3 stack doesn’t need to worry about this. For our testing, we are running the Core i3-12300 with DDR5 memory at JEDEC specifications for Alder Lake (DDR5-4800 CL40). We are also using Windows 11 from now on for our CPU reviews.

For our test bed, we are using the following:

All other chips for comparison were run as tests listed in our benchmark database, Bench, on Windows 10.