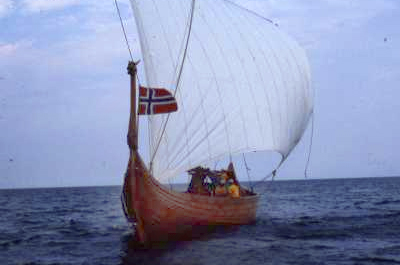 Robert Asp dreamed of building and sailing a Viking ship as a way to connect with his Norse heritage. He read several books on the subject while recovering from a broken leg after a fall. Once recovered, he began to work seriously on the ship. Asp chose the name for his ship Homecominga Norwegian word meaning homecoming, and set in motion his plan to sail the Atlantic.

In July 1972, the first wood was milled at Harvey Engen’s sawmill north of Viking, Minnesota. Asp personally selected every White Oak that was milled. He estimated that it would take fifteen trees to build a Viking ship; eventually more than a hundred were needed. He chose an old potato warehouse in Hawley, Minnesota, to house the ship and rented it from the city for $10 a year. Renovations transformed the Welter Potato Warehouse into the newly minted Hawley Shipyard.

Asp was diagnosed with leukemia in 1974, but never lost sight of finishing his dream ship. It took him and his volunteers six years to finish. The finished ship had the horned head of a dragon, which the crew named Igor, on the bow. Sleeping quarters, along with a stove, water, food, sea anchor and inflatable lifeboat, were all equipped on the ship. The center mast was 63 feet tall and supported a thirty foot by forty foot mainsail and a three foot by thirty foot topsail.

On July 17, 1980, Homecoming debuted and was presented to a cheering audience. The vessel was towed overland from Hawley to Duluth and first sailed into Duluth Harbor on August 9, 1980. More than 4,000 spectators witnessed the maiden voyage. The crew trained for weeks on Lake Superior before their trip to Norway.

Robert Asp made his last voyage on his dream ship in the port of Duluth on September 27, 1980. He died of leukemia later that year on December 27. After his death, his family and friends remained committed to fulfilling his dream of becoming the Homecoming alive to Norway.

In May 1982, a crew of 13, including four of Robert’s children, embarked on the journey from Duluth to Norway. The first leg of the journey took them through the Great Lakes, stopping for celebrations in several port cities. The Homecoming arrived in New York City on June 8, 1982. The ship sailed around the Statue of Liberty in New York Harbor and then began its journey across the Atlantic.

A few days outside New York, the crew encountered a storm. When the wind and waves caused damage to the ship, including a crack running fourteen feet down the keel, the crew considered turning around. However, their experienced Norwegian skipper decided they could continue.

During the following weeks, the crew sailed and entertained themselves by writing in diaries, playing cards, water skiing from the back of the ship, playing guitar and singing. On July 19, 1982, the crew arrived in Bergen, Norway. Family and friends had flown to Norway to greet them and the locals came out in large crowds. The crew was honored at many festivities, including a royal visit with the King of Norway on his yacht. The Homecoming fulfilled Robert Asp’s dream by reaching his final destination of Oslo, Norway on August 9, 1982.

The Homecoming was stored in Oslo for a year after the voyage and then transported aboard a freighter from Norway to Cleveland, Ohio, in August 1983. It was towed from Cleveland to Detroit, Michigan and trucked back to Minnesota.

In 1986 the Asp family donated the Homecoming to the town of Moorhead. The city built a visitor center to preserve the ship, tell the story of the voyage, and keep Robert Asp’s dream alive for generations to come. The Homecoming was taken into the care of the Historical and Cultural Society of Clay County and installed in a museum (the Hjemkomst Center).

For more information on this topic, check out the original post on MNopedia.