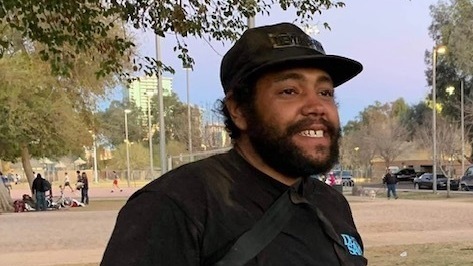 Sean Bickings, 34, drowned in Arizona’s Tempe Town Lake on May 28.

Three Tempe police officers who watched as a man drowned in an Arizona lake late last month have been placed on “non-disciplinary paid administrative leave” as several law enforcement agencies investigate what happened.

According to city officials, officers responded to a call about a disturbance just after 5 a.m. outside the Tempe Center for the Arts, where they found Sean Bickings, 34, and his companion.

Officers were talking to an uncuffed Bickings — who was described by officials as an “unsheltered Tempe community member” — as they ran the names of him and his companion through a database to check for pending warrants, authorities said.

It was then that Bickings climbed a metal fence, descended an embankment and began to swim in Tempe Town Lake, images from the police body camera of one of the officers.

The footage breaks down before Bickings begins to struggle in the water, but the city has provided a transcript of the video from there.

An officer tells him to swim to a pylon, but Bickings says he can’t.

“Okay, I’m not jumping after you,” the officer responds.

Authorities say they plan to release additional portions of the body-camera video of all three responding police officers this week. Those images will also be edited “because of its graphic, sensitive nature,” they said.

Tempe police and city officials say they are also reassessing their water response protocols, what equipment officers need and the placement of rescue equipment in bodies of water.