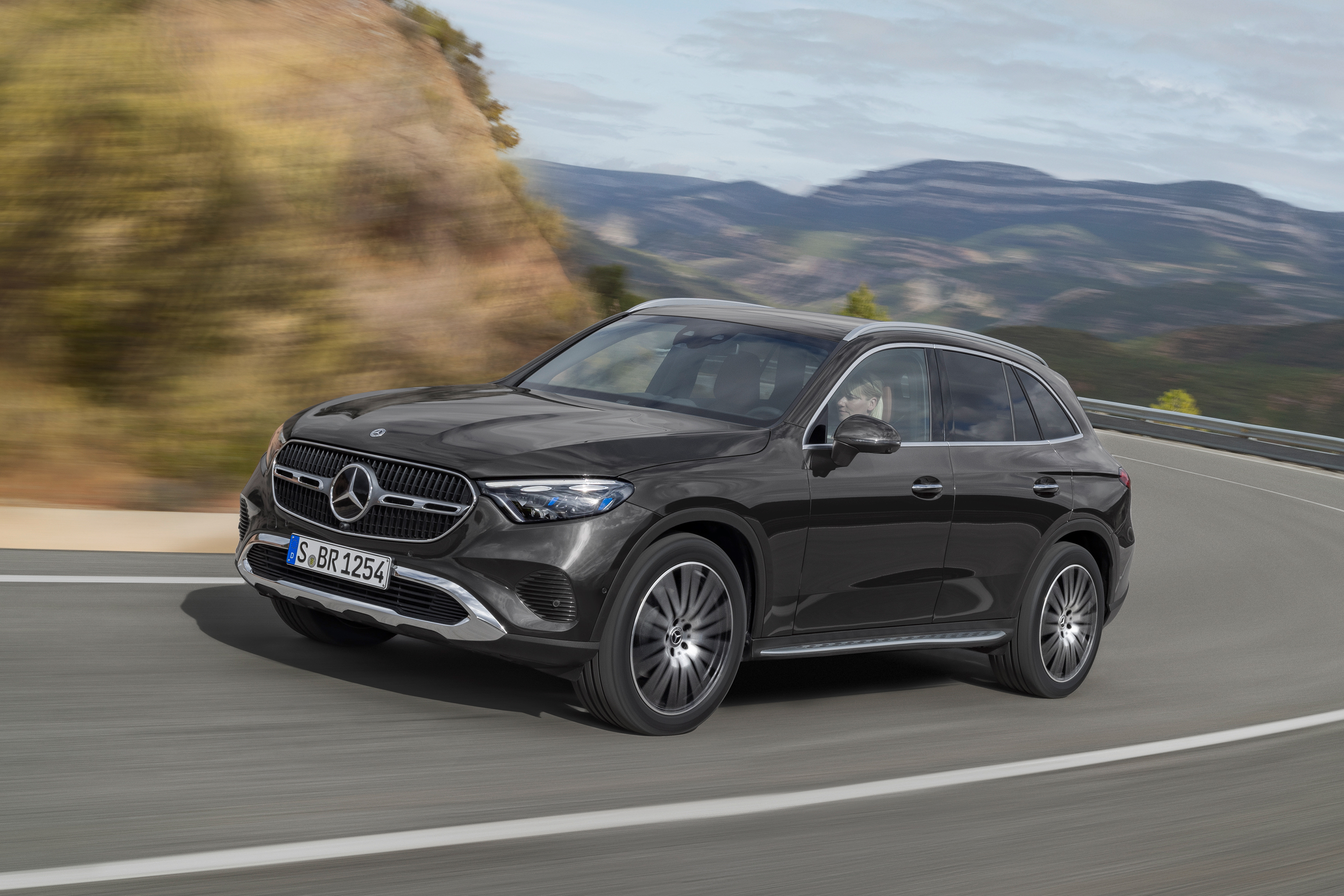 The second-generation Mercedes-Benz GLC-Class SUV debuted this week and showed off a familiar profile, high-tech features and new levels of efficiency. Mercedes first showed the model as the base GLC 300, although many more versions of the two-row model are expected to be shown soon.

The new GLC 300 is 2.4 inches longer and 0.16 inches lower than its predecessor. The track widths have been increased at the front and rear. Overall width is the same, but buyers get an extra 2.5 cubic meters of cargo space over the previous generation and an electrically operated tailgate.

Mercedes designers have revised the GLC body for the new model year. It comes with a redesigned front end with headlamps that now connect directly to an AMG-Line Mercedes star grille with matte gray louvers. From the side, the GLC 300 only gets a few character lines, the uppers of which meet new taillights that extend over the rear. Wheel choices start at 18 inches and go up to 20 inches, with different options in color and texture.

The 2023 GLC 300 uses its 2.0-liter four-cylinder engine to deliver 258 horsepower and 295 pound-feet (lb-ft) of torque (versus 255 horsepower and 273 lb-ft in the previous generation). The EQ Boost mild-hybrid system uses the battery and integrated starter/generator to deliver short bursts of 23 horsepower and 148 lb-ft of torque to enhance the passing and off-the-line experience.

A nine-speed automatic transmission remains standard, while rear- or four-wheel drive layouts are offered. Regardless of the powertrain, the GLC 300 can go from 0 to 60 miles per hour (mph) in 6.2 seconds, heading for a limited top speed of 130 mph.

Once the sidewalk ends, the Mercedes-Benz GLC can use hill descent (called Downhill Speed ​​Reduction by the automaker) to control movement. Combined with multiple cameras that provide a 360-degree view and a new “transparent hood” feature, the system shows a virtual view underneath the vehicle, including wheel placement and position, so drivers can avoid obstacles.

The 12.3-inch all-digital instrument panel displays slope, slope, topographic elevation, geographic coordinates and a compass, as well as road and engine speed. The 11.9-inch infotainment touchscreen shows the current position of the SUV in the terrain and the steering angle of the front wheels.

Inside, the new GLC 300 comes with aircraft-inspired air vents and a dashboard structure that houses the two displays and is connected to the armrest. There is only one physical button for the driver to press, the start/stop button on the dashboard. Everything else is controlled via the screen or the steering wheel.

The door panels are simpler than before with seat controls sitting above a metal armrest with window switches. As with the previous model, mood light strips have been placed around the cabin. The GLC also has a new profiled, sweeping seat design with perforated leather, and a few new open-pore wood finishes are offered.

A number of technological upgrades are designed to increase the vehicle’s appeal. This includes a smarter adaptive cruise that can respond to stationary vehicles on the road at speeds of up to 60 mph (it used to be 30 mph).

Mercedes says it has made the standard parking system more user-friendly and added a new one. The Parking Package adds the 360-degree camera and Active Parking Assist with Parktronic. This system helps the driver to see what is around him while parking. Alternatively, Mercedes technology can take the wheel and park itself.

Digital Light headlights can direct the light distribution. The high beam allows the driver to see what is ahead, while the lights themselves can dim small portions so as not to dazzle drivers in the other lanes. It can also mark pedestrians standing near the road so they can continue their journey safely.

The 2023 Mercedes-Benz GLC will go on sale in the US in the first half of next year.