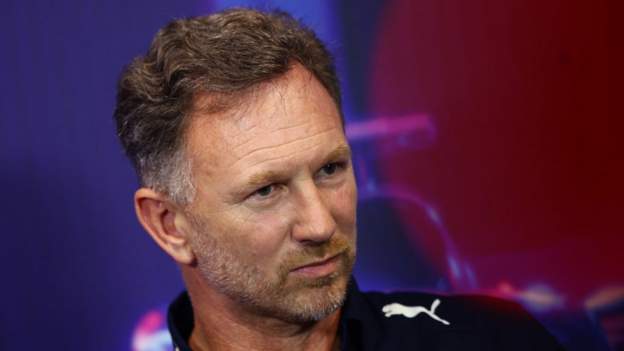 Red Bull team principal Christian Horner says he is “absolutely certain” that his team will not have exceeded Formula 1’s budget cap in 2021.

Ferrari and Mercedes say it is an “open secret” that two teams have exceeded the limit to some extent, and in the paddock within F1 they are widely claimed to be Red Bull and Aston Martin.

Horner said: “We are 100% behind the submission that we are under the limit.”

He said his rivals’ comments were “unacceptable” and “hugely defamatory”, and he threatened to take further action in response.

Aston Martin says it is “in talks with the FIA ​​and awaiting certification”.

Ferrari did not mention Red Bull in their public comments on Friday.

Mercedes team boss Toto Wolff, in response to Horner’s claim that he had “no knowledge” of any violations by Red Bull, told Sky Sports: “It’s funny Christian says that because it’s been weeks and months they’re being investigated. , so maybe he doesn’t speak to his CFO [chief financial officer].”

Horner accused both rivals of using “a backhanded tactic” to distract from the fact that Red Bull driver Max Verstappen could take his second world title at the Singapore Grand Prix this weekend.

Horner said the process of the FIA’s governing body assessing Red Bull’s accounts was “ongoing” and the team was “a little surprised” by the comments.

Mercedes and Ferrari both said they believed one team had broken the cap with a large number and the other with a smaller one. F1’s financial regulations define a minor violation as a violation of less than 5% of the limit, which was $145 million (£114 million) in 2021, and a material one as more than that.

The FIA ​​has informed the teams that it may or may not issue certificates of compliance on October 5.

Mercedes team principal Toto Wolff said: “As far as we understand there is a team in minor offense which is more procedural, and another team which is fundamentally over massive and that is still being taken care of. So that’s a open secret in the paddock.”

Horner said: “The facts are that it is a private submission to the FIA.

“So maybe when these allegations are made, people in glass houses shouldn’t be throwing rocks and you know we take offense and take the comments that have been made extremely seriously.”

He added: “Unless these comments are clearly withdrawn, we will take it incredibly seriously and see what the options are.”

Mercedes and Ferrari have rejected Horner’s request to withdraw their comments.

Ferrari sports director Laurent Mekies echoed Wolff’s comments on Friday, saying it was “no secret” that two teams had broken the limit.

Mekies added at a press conference on Saturday that any exceeding the limit last year would also have an impact on performance in 2022 and 2023.

“If there was a breach in 2021, what benefit will be carried over to 2022 and 2023?” said Mekies. “After that you can discuss the penalty and how do you make it meaningful.

“We’re just talking about transparency and rigor because if it turns out that it’s something a team can bet on to gain a competitive advantage, the whole system collapses. The first time the budget cap is challenged, you have a certain degree of rigor.

“If you think about the strength of the financial regulations, it probably dominates the sporting and technical regulations, so we look forward to a transparent and rigorous approach.”

He added: “It’s a very essential test for the cost cap. And if we don’t pass that test, it’s probably game over because the implications are huge.”

Penalties for a minor violation may include a deduction of points for the championship in which the violation occurred, a suspension from a limited number of events, restrictions on research and development and a reduction in the cost cap for the affected team.

A material violation includes the ability to ban a team or driver from an entire championship.

The cap was introduced in 2021 as part of a series of rule changes to close the field and make the sport more competitive.

Andreas Seidl, McLaren team principal, said: “The financial rules are just as important as the technical and sporting ones, and it is very important that the FIA ​​police execute them correctly and enforce them with the right penalties, even if this is the results of championships. from the past.”

Alfa Romeo team principal Frederic Vasseur said: “We cannot compromise the budget cap. [If it collapses]It’s not the end of F1, but almost, and we need to take action.”

Horner also accused Williams of “forgetting” to submit their submission, which Williams chief executive Jost Capito, who sat next to him during a press conference, was “not true”.

Williams was fined $25,000 in June for a “procedural violation” of the financial rules. Capito said it was caused by an audit delay from one of the team-related companies, the FIA ​​had been warned, it was dealt with within a week and had “nothing directly to do with the team”.