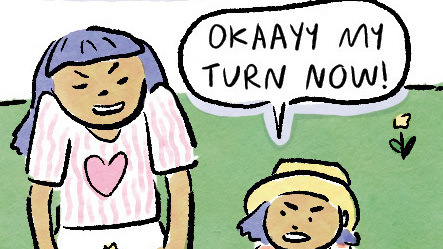 Editor’s Note: This story discusses the practice of giving children the freedom to go out on their own. In some places, parents who allow young children to run errands or go places without adult supervision may be breaking local laws. Parents interested in this topic should familiarize themselves with the law and regulations in their community.

This month we asked NPR readers to provide personal examples of how they taught their children to shop for themselves. Why did they decide to do it? What were the challenges? Was the community supportive?

Nearly 100 people have emailed us their response. The call was linked to NPR correspondent Michaeleen Doucleff’s April 20 story: “A 4-year-old can only run errands…and not just reality TV.” Doucleff talks to child development experts about the risks and benefits of allowing very young children to be very independent – the concept of a vibrant Japanese TV show called Old enough! streaming on Netflix now.

One clear theme: it is not so easy to give children the freedom to perform simple tasks. Some parents are even against the practice. Here is a sampling of their responses. Entries have been edited for length and clarity.

‘She goes to the bakery alone’

As an American living in the Netherlands, my 8-year-old daughter grew up in a society that not only expects children to shop for groceries, but also sees it as a crucial step in their growth and socialization.

We started building her independence around the age of four with small chores at home: setting the table, clearing dishes, making her own lunch for school. She worked her way from doing things around the house to things in the neighborhood: collecting trash nearby with a trash can, planting flowers in our community garden. Now that she is 8, she goes to the bakery alone while I wait in line at the farmers market, cycle to school and watch over the younger children playing outside after school.

At first it was hard for me to trust that I would be fine without supervision. I often considered getting her a watch that tracked her location. But I saw that the more experience she gained in dealing with problems she encountered, the safer she became. For example, when she fell off her bike and skinned her knees, she found the nearest place to rest and lock her bike before walking back home. She learns to assess risks and find solutions in each scenario.

‘We live in the ‘hood and my child is brown’

I like the idea of ​​sending my kid to our neighborhood butchery to get tortillas, hominy or whatever to make dinner. But we live in the hood and my kid is brown. I’m afraid he’ll run into local gangs or the police will stop him on the street because he looks suspicious. He is a tall brown 11 year old boy with long brown hair.

Many areas lack sidewalks and crosswalks and have more highways and industrial zones, posing risks to walkability and safety. Corner stores and liquor stores are often the closest place you can walk to.

When reporting on a practice that may be helpful, let’s take a look at the barriers that disadvantaged people face.

Inspired to send his son on a message

When I was three or four years old, my grandmother sent me out to buy her soy sauce and cigarettes. This was in China. Both my parents had gone to the US at the time and I lived with an extended family. I have an explicit memory of this incident. I repeated to myself, “soy sauce and a pack of cigarettes” all the way to the corner stand. I couldn’t count money yet, so I gave the salesman, who knew I was a kid from the neighborhood, the bill my grandmother gave me—then received the change he gave back, hoping it was correct. I returned the change, the soy sauce, and the pack of cigarettes to my grandmother, who didn’t seem to have moved a muscle from her place in bed. She was happy and smiling.

The store couldn’t be more than a few blocks away, but my young self was on an odyssey, a hero quest complete with magical items, tasks, and characters encountered (really just one). This is one of my earliest memories, and I have no doubt that it is because of the way the freedom and responsibility that were suddenly imposed on me was for my developing brain.

Your article reminded me of this. Tomorrow I will send my 3 year old son, soon 4, to the end of our block in a very suburban, very residential area to pick up the mail.

Update: He couldn’t get the key all the way in the lock so I had to help him. After that, he struggled to carry all the mail on his own, dropping letters left and right. So I helped him with that too. Also, he left the mailbox unlocked with the key still in it, as he had his little hands full. All in all, I probably did 60% of the job.

But it was a valuable learning experience… for me. I now know what skills he needs to work on (negotiate the key), where he needs guidance (how to collect and keep mail together – I’ll give him a bag to use next time) and what we like plan in advance to build his confidence. The article was right: Kids must have all the skills needed for the task before they can be let go.

‘Terrified’ at the thought

I live in an apartment complex – and just the thought of all the things that could go wrong if I leave my 7-year-old son at home alone – say, while I go to the washroom – scares me. I’m afraid he’ll get hurt, playing with something that shouldn’t be. Just the thought of him not being around me worries me.

‘He was not lost’

I was at the supermarket with my 9 year old. I was shopping for weekend meals and had quite a long list. He was bored and asked if he could go and see the Matchbox cars often sold in this supermarket. I told him to go alone and look for them.

An elderly white woman saw my son, determined that he was lost and looking for his mother, and took him to the front desk to have the manager call me at the store. I was quite annoyed. When I went to the front desk to pick up my son, I confronted the woman who I believe expected me to emotionally hug my child and thank her profusely for her help. Instead, I turned to her and said, “He wasn’t lost, he was looking for Matchbox cars. He’s 9 and a half. How is he supposed to learn independently if he can’t go shopping alone?”

I am confident that at 9 years old my son should be able to navigate the supermarket on his own and that he can easily find me if he wants to.

‘Someone called CPS on me’

I live in Wisconsin. Before COVID expanded grocery delivery options, I sometimes sent my daughter, who was then in 5th grade, to the nearest grocery store alone. It’s half a mile away and all she had to do was cross the street in front of the apartment we live in. The rest of the walk was on a sidewalk.

Someone named CPS [Child Protective Services] from me to say I let her wander around the neighborhood on her own. The [person who called] tried to make it look like my daughter was doing this because i wasn’t home or unable to take care of her.

I grew up in Miami, Florida. I went to the store alone for fifth grade. I even cycled home from primary school. Fortunately, CPS was understanding after talking to us, but it was scary when someone called!

‘We worked out a whiteboard grid’

I currently live in a large suburban metropolitan area where there are no sidewalks or corner markets. Children do not walk to school even though primary school is only two blocks away. Nobody plays outside. I’ve never seen a young person walk a dog or mow a neighbor’s lawn.

In the late 1980s, I was a single parent. We lived in a mobile home park. My children were house-key children from an early age.

To build a trusting relationship and give me peace of mind [about what my children were doing at home] while I was working, the guys and I made a schedule of responsibilities that we thought they could handle. We worked out a whiteboard grid showing what was expected of them when they got home from school: sorting and doing the laundry, turning on the vacuum cleaner, making beds, cleaning the aquarium, and even preparing dinner. When each task was completed, they checked it off the whiteboard. We didn’t have video games or cell phones or tablets back then, so television (no cable) was their reward once their chores and homework were done. Interestingly, they are still applying the whiteboard practice in their adult lives today.

My now grown children often remark that although we have had great difficulties, those years contain precious moments.

They get their own slushies at the Circle K

We live in a rural area, so my kids – ages 6, 8 and 11 – don’t really have anywhere to go. So instead I drive to the store and send them alone. Their favorite assignment is to get slushies at the local Circle K on Fridays as their after-school treat. I give them my credit card and send them to them while I wait in the van.

Thank you to everyone who has responded to this call! Don’t miss our next one. Subscribe to our weekly newsletter†