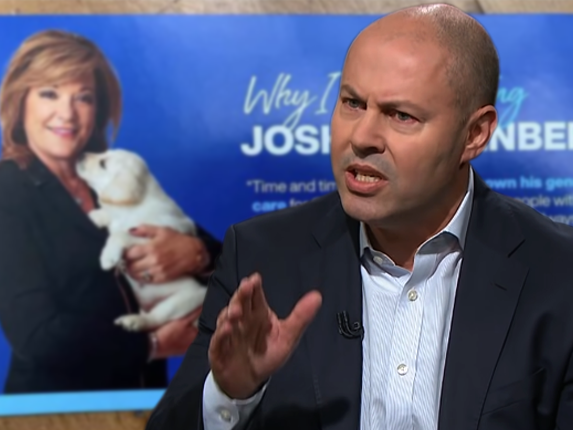 Guide dogs Victoria appears to have broken federal law and could have charity status disqualified if the CEO appears in election ads in which treasurer Josh Frydenberg argues strongly.

The emerging scandal comes as it has been revealed that the “support” Frydenberg offered the group in the “darkest days” of COVID-19 — including $3.5 million in JobKeeper payments it didn’t need — involved it. already bulging “money in the bank”. to $18.75 million, up from $16.65 million a year earlier.

Under the title “Why am I voting for Josh Frydenberg?”Kew-based Guide Dogs Victoria CEO Karen Hayes—who goes by simply “Karen” in the ad—is quoted lavish praise for the treasurer.

“He has always maintained his strong and unwavering commitment to his local Kooyong community to whom he has served in so many ways.”

‘In our darkest moments, Josh was there to support’ Hayes says in the ad, which appears on Frydenberg’s website and on flyers distributed to the inner-city Melbourne electorate.

“Hi, I’m Karen and I’ve known Josh for over ten years and I couldn’t have asked for a better local federal member for Kooyong than Josh Frydenberg.”

The political ad appears to put guide dogs Victoria in direct violation of charity laws, which state that a charity will be disqualified if it engages in ‘promote or oppose any political party or candidate for political office’†

In the ad, Hayes is shown with a guide dog in training, her title is mentioned twice – ‘Chief Executive Officer, Guide Dogs Victoria’ — and she is widely quoted and lavishly praised Frydenberg.

The Australian Charities and Not-for-profits Commission (ACNC) lists the promotion of a political party or candidate as a: ‘disqualifying target’of which it lists three.

“Purposes that disqualify an organization from being a registered charity are…to promote or oppose any political party or candidate for political office.”

The scandal is especially damaging to Frydenberg, who is already low in the polls, as it was the Federal Coalition that passed highly controversial and retrospective laws around charities and political influence in December.

The Federal Treasurer has also come under pressure from revelations that he oversaw the covert removal of key findings from the corruption investigation at the top corporate regulator, the Australian Securities and Investments Commission (ASIC).

Guide dogs Victoria and Karen Hayes did not respond to a specific request for comment.

In a statement, Guide Dogs Victoria said the board had ‘no prior knowledge of the distribution of this material’that it had asked for the material ‘immediately withdrawn from circulation’ and that it had ‘start internal investigation’†

‘Guide Dogs Victoria has been made aware of the proliferation of political material containing comments from our CEO who appears to be supporting a local candidate in the upcoming federal election.

The board had no prior knowledge of the distribution of this material and does not approve it.’

Hayes is quoted as saying:

“The COVID-19 pandemic has had a devastating impact on our customers, who have experienced isolation like never before.

In our darkest moments, Josh was there to provide support.

I’ve lost count of the number of times Josh has personally called me in the past two years to encourage me, my team, and the thousands of visually impaired and blind people we support who were struggling.”

Frydenberg, as treasurer, oversaw the JobKeeper program, which was criticized as one of the largest wastes of public money in Australian history, with at least $38 billion going to businesses and other entities that didn’t need it.

Guide Dogs Victoria is one of those entities.

In addition to millions of dollars in other government aid, grants and grants, Guide Dogs Victoria received more than $3.5 million in JobKeeper benefits despite delivering multi-million dollar surpluses.

The group’s 2020-21 financial reports show those millions of dollars in taxpayer subsidies are being earned despite being awash in cash.

In the past two fiscal years, the amount of cash or cash equivalents held by Guide Dogs Australia has increased by $6.52 million. At the same time, the taxpayer subsidies it received totaled $5.72 million.

Anthony Klan is an investigative journalist and editor of The Klaxon. You can follow him on Twitter @Anthony_Klan. This article was originally published on The Klaxon and has been republished with permission.