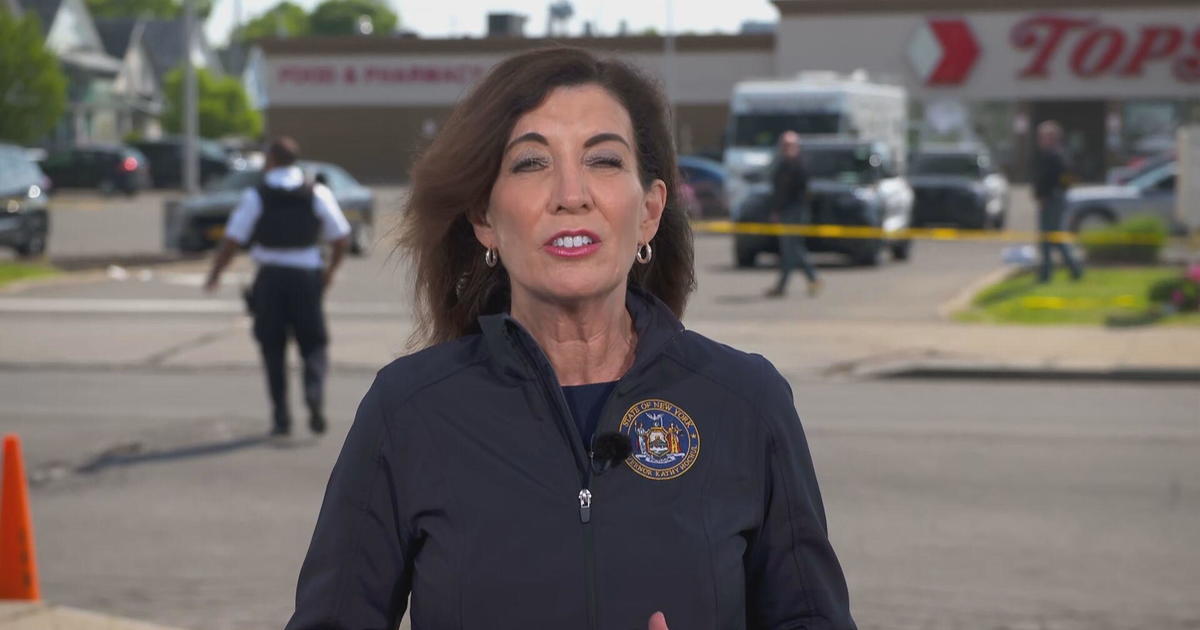 Washington- New York Governor Kathy Hochul said on Sunday that the shooting in a Buffalo supermarket That left 10 dead and three injured was “white supremacist terrorism” and urged social media companies to step up their enforcement efforts against extremist content.

“I call on social media platforms to make sure they monitor the hate speech out there more closely, especially when it’s targeting populations and under the guise of white supremacist terrorism, and that’s exactly what happened. here in Buffalo,” Hochul said in an interview with “Face the Nation,” discussing a manifesto allegedly written and posted by the suspected gunman before Saturday’s attack.

Police said the suspected gunman, identified as 18-year-old Payton Gendron, opened fire at a Tops Friendly Market in a racial hatred attack that killed 11 black people and two white people. He was approached by the police and arrested in the store. Gendron was arraigned Saturday on charges of first degree murder and pleaded not guilty.

Gendron lived in Conklin, New York, about three and a half hours from the grocery store, and reportedly wrote and posted a hate-filled manifesto online, saying he chose the location for the attack because of the high black population and relative close proximity.

In the aftermath of the shooting, Hochul said her state is taking “proactive steps” to monitor social media platforms and is calling on internet companies to keep their surveillance of hate speech “under the guise of white supremacy and terrorism.” including by hiring more people and changing their algorithms to identify hate speech more quickly.

“This information was there. This was on a manifesto written a while ago and so we are very concerned about what other information is being committed on social media platforms and being disseminated worldwide,” she said. “This information from yesterday’s attack is already there, it was streamed live, this person’s intent was telegraphed in advance.”

Gendron streamed the start of the attack on the platform Twitch, and the company said it took down the stream within two minutes.

Hochul noted that both federal and state law enforcement platforms are monitoring and called for a “multi-faceted approach.”

“We need vigilance not only for law enforcement, but also for the platforms that are causing this to spread. They also have a responsibility,” she said.

While Gendron faces charges of first-degree murder, the most serious under New York law, Erie County District Attorney John Flynn suggested Sunday that he could file a domestic terrorism charge. However, there is no federal statute classifying an attack based on race or religion as a terror attack, and Hochul said there should be.

Still, Gendron could be prosecuted under both federal and state laws, and Hochul said it’s unlikely he’ll ever leave police custody.

“This person will never see the light of day again, whether under federal prosecution or under our domestic terrorism laws or just murder,” she said. “This person killed 10 innocent victims in our community yesterday.”