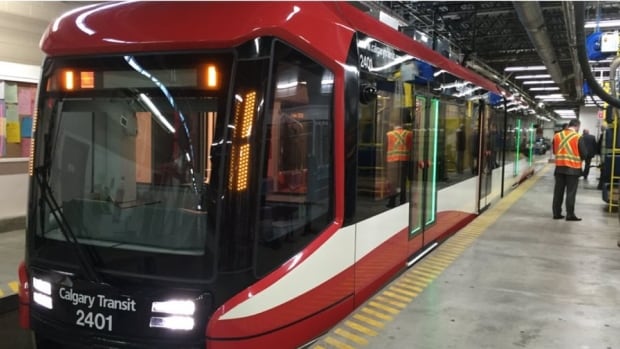 For years, senior Calgary Transit officials have told the city council it would cost $400 million to add turnstiles or other measures to Calgary’s CTrain system to keep out those who don’t pay a fare.

CBC News filed a freedom of information request to obtain the investigation. However, no reports match the request.

CBC asked to speak with Calgary Transit’s transportation GM, Doug Morgan, but the request was denied.

For years, politicians have questioned the potential cost of closing the LRT system to anyone who hasn’t paid a fare, versus the lost revenue of maintaining a fee-paying system.

Transit officials say annual surveys find only a few percent of the total number of riders on the system pay no fare. They say the cost of upgrading or shutting down the system to those who don’t pay would be significant.

“That $400 million is based on a number of things, mainly our experience with refurbishing and building stations in the past. The last station is Tuscany in 2014,” says Tauro.

“The rough estimate, we’re looking at somewhere between $5 and 10 million per station, depending on its makeup, how it’s developed in the community, and whether it already has a station building.”

Tauro said the $400 million to go to a closed system does not include operational costs, such as having station attendants, as some public transit systems do.

When asked why officials have used the figure, he said there was “a lack of clarity on our part” and that previous investigations into tariff evasion have indicated that closing the system will come at a cost.

“There’s a lot of work going on in the background. So not necessarily written on paper, but part of that study is looking at what it would cost versus continuing with the honor system.”

count. Dan McLean recently stated that he supports a closed system for Calgary’s CTrain as a way to reduce social disorder and that it would help passengers feel safer.

He said he’s disappointed that Transit has relied on that figure, but it hasn’t really studied the issue.

McLean said he has also asked the administration for information about where that estimate comes from, but nothing has been provided to him so far.

“I might not go as far as to say betray, but to me that was why we pretty much closed the matter from the start, because of the high price,” the councilor said.

“I’d like to see the report because what did that include? Did that include lighting, was that a turnstile system, or is that kind of glazing in an entire facility like other cities have done? Is that completely closed, partially closed? What are the cost per turnstile per platform so we can make some decisions.”

count. Kourtney Penner is not in favor of a closed system, saying that the money for those changes to facilities would be better spent on expanding the LRT system or improving transit service.

She said she has also heard the $400 million figure repeatedly. Upon learning that there have been no investigations into the cost of moving to a closed system, she urged the administration to communicate more clearly with Calgarians.

“To my own fault, right, I didn’t ask for that too and took the administration at their word that a special study has been done and so that’s the work we all need to do to improve,” Penner said.

“I think this one fell through the cracks,” says Gondek

“We’ve long believed that there’s this legend of a study to find out if it was, in fact, just an estimate,” she said.

Going forward, Gondek said one of two things will happen, and she hopes it’s the first.

“That is to say, that government realized that if you want to give us numbers, you need to make sure they’re backed up by empirical evidence. The second thing would be that from now on the council has to report forever before we believe anything. And I would like to think we are in a more advanced society than that,” she said.

“There have been many, many times where we have received information immediately when we asked for it. It has been backed up by reports and data. I think this is one that has fallen through the cracks and I hope it doesn’t happen again .”

Last month, transit director Sharon Fleming told councilors that a consultant will be hired later this year to investigate the closed system issue.

The city wants to explore the feasibility of implementing a closed system, examine the effects on customer experience and how this could affect accessibility and communities near stations.